Role of Glycated Hemoglobin and Sialic Acid in Nondiabetics having a Myocardial Infarction: A Case-control Study in the People from North Coastal Andhra Pradesh

How to cite this article Basha SYC, Kasi HK. Role of Glycated Hemoglobin and Sialic Acid in Nondiabetics having a Myocardial Infarction: A Case-control Study in the People from North Coastal Andhra Pradesh. Indian J Med Biochem 2019;23(3):350–353.

Aim: The study aims at evaluating the glycated hemoglobin and serum sialic acid as risk factors in patients with myocardial infarction, who are nondiabetic.

Materials and methods: This is a case-control study performed on the population of north coastal Andhra Pradesh. All the subjects got admitted to King George Hospital/Andhra Medical College which is a major referral hospital to the people of north coastal Andhra Pradesh. One hundred subjects participated in the study, of which 50 had myocardial infarction and are nondiabetic, and the rest are controls who never had myocardial infarction. Glycated hemoglobin and serum sialic acid levels were estimated, and results analyzed for the association. Statistical analysis was done using SPSS software.

Results: Glycated hemoglobin and serum sialic acid levels are significantly increased in patients with myocardial infarction who are nondiabetic.

Conclusion: Persistent hyperglycemia levels not surmounting to diabetes can be a significant risk factor in the development of myocardial infarction.

Clinical significance: This study helps us to identify the role of persistent hyperglycemia not mounting to diabetes as a significant cardiovascular risk factor.

Cardiovascular and cerebrovascular diseases are the top two causes of death worldwide as per WHO. It is a well-established fact that diabetes is the major predisposing factor for both ischemic heart disease and stroke.1 It results in both macrovascular complications and microvascular complications. The pathophysiological changes in diabetes are due to the presence of persistent high blood glucose levels.

Data show2,3 that the persistently high glucose levels in the body contribute to the mortality along with the hypercholesterolemia, smoking, and hypertension responsible for the mortality in nondiabetics.

Sialic acid forms an essential constituent of the cell membrane. It acts as a critical signaling molecule, which helps in cellular control and differentiation. It is an independent risk factor in cardiovascular disease. Studies have shown that there is a positive correlation between sialic acid levels and atherosclerosis.

The role of HbA1c as a cardiovascular risk factor is established in very few studies, so is the role of serum sialic acid in nondiabetic individuals. We, therefore, propose to study the role of glycated hemoglobin as a cardiovascular risk factor. In this attempt, we are exploring the relationship between glycated hemoglobin, lipid profile, and sialic acid in nondiabetic individuals.

Fifty patients who are diagnosed with acute myocardial infarction at King George Hospital, Visakhapatnam were selected for the study after taking informed consent. The diagnosis was based on ECG findings, cardiac troponins, and angiography. The cases were selected based on a simple random sampling method. 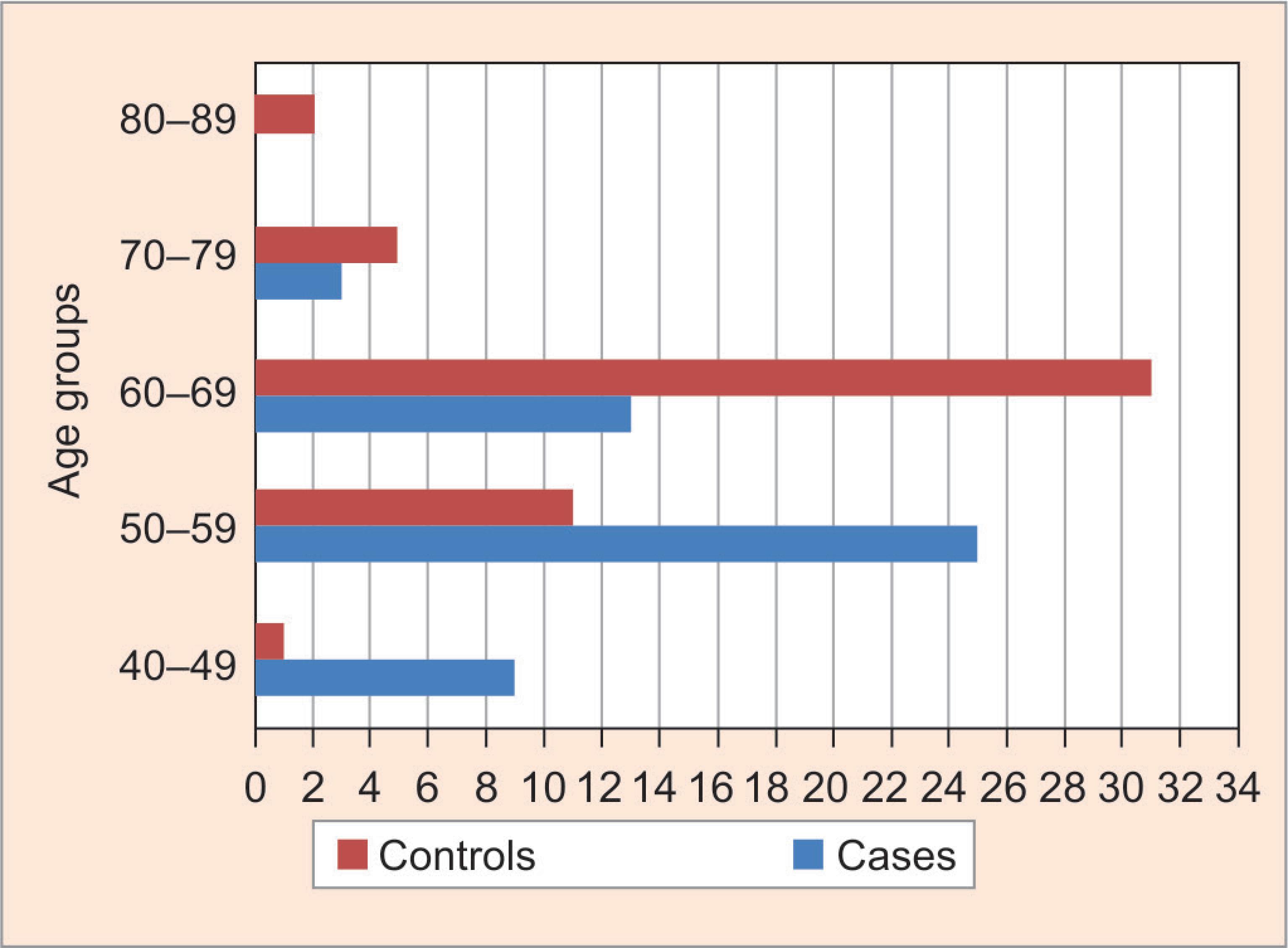 Fig. 1: Age distribution across the case and control groups 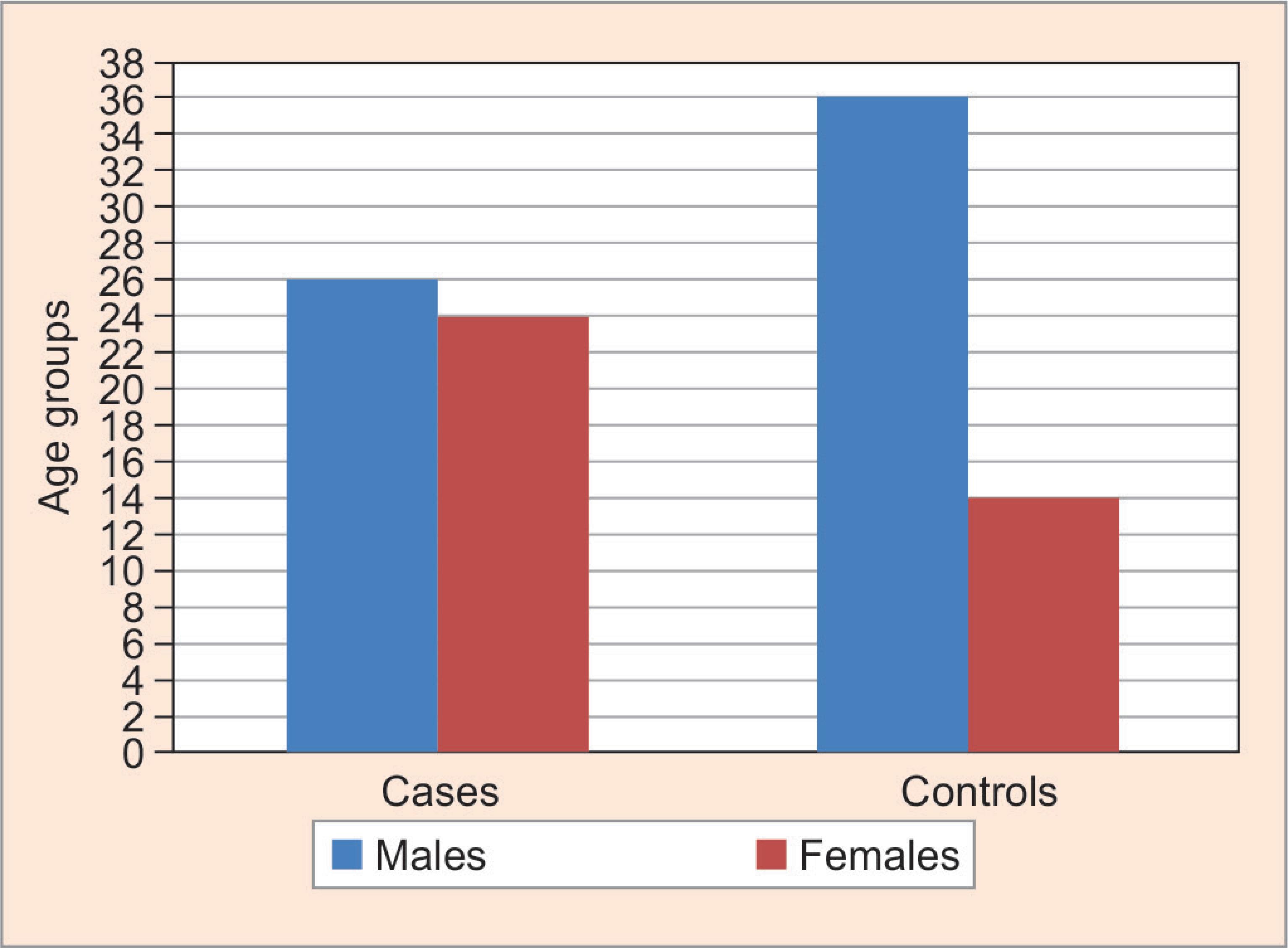 Fig. 2: Gender distribution among the case and control groups 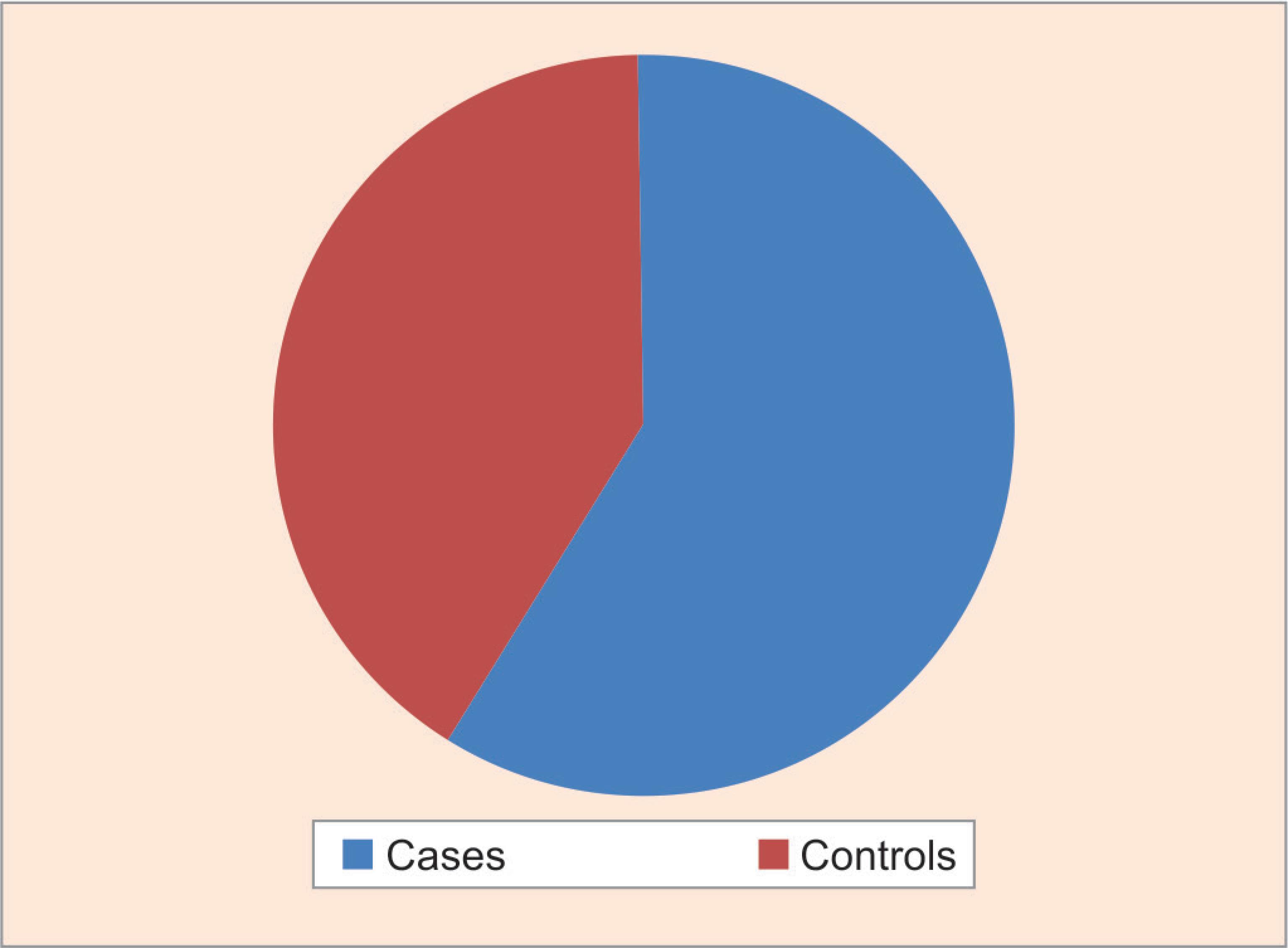 Fig. 3: Smoking distribution among the participants of the study

Coagulation activated container was allowed to clot and centrifuged at 5,000 rpm for 15 minutes. Serum obtained from coagulation activated vacutainer is used for the analysis of fasting blood sugar, total cholesterol, triglycerides, high-density lipoprotein, and sialic acid. The sample collected in EDTA vacutainer was used for the estimation of HbA1c.

Glycated hemoglobin was estimated using a high-performance liquid chromatography (HPLC) method on the Bio-Rad D10 analyzer. While sialic acid is estimated by the modified thiobarbituric acid method by Warren (Lorentz and Krass) and analyzed on a spectrophotometer. Blood glucose, total cholesterol, HDL cholesterol, triglycerides, and low-density cholesterol were performed on a Beckman Coulter AU480 system.

The study is a case-control study and includes a comparison between 50 patients diagnosed with myocardial infarction. They are compared with 50 healthy controls. All the participants in the study are nondiabetic.

The total number of males participating include 62, while 38 females participated in the study. The sex distribution in cases is almost equal, while there are more males present in the control group (Fig. 2).

There is a total of 30 smokers in the cases, while there are 29 nonsmokers in the controls. About 51% of the participants included in the study are smokers. There is a significant association between smoking and myocardial infarction as indicated in our results.

Hypertension is observed more in the cases when compared to the controls. A total of 31 cases were hypertensive while that of 19 controls (Fig. 3).

Atherosclerosis is the predominant cause of arteriosclerotic vascular disease. Several risk factors will play a significant role in the formation of this complex atheroma. The complex pathophysiology helps to identify novel biomarkers that have immense potential, for their role in the diagnostics. Glycated hemoglobin can be used to monitor the average blood glucose levels as it is an indication of persistent hyperglycemia.

Meta-regression analysis of several studies suggests a continuous relation between fasting and postprandial glucose concentration and macrovascular events even below the accepted threshold for diabetes,4 but data for HbA1c in patients without diabetes have been limited.

European prospective investigation for cancer and nutrition was one of the initial studies to have observed the presence of persistent hyperglycemic levels in a group of the population of Norfolk county in Europe.4 They found the elevated hyperglycemic levels, which are reflected as high HbA1c, could be used as a predictor of mortality with cardiovascular disease.

In the present study, the mean glycated hemoglobin among cases was 6.0 ± 0.3 to controls 4.97 ± 0.2. The difference of means was found to be significant at the level of <0.005, as revealed by an independent sample t test where cases had higher HbA1c than controls.

The findings in our study are consistent with those of the EPIC—NORFOLK study.5 There is a significant increase in the levels of glycated hemoglobin, not amounting to the diabetic range in cases when compared to controls. There is no significant correlation between fasting blood glucose with HbA1c. The most likely cause of this may be due to stress-induced hyperglycemia.6

A significant correlation was present between TC, LDL, TG, and high-density lipoproteins (HDL). High-density lipoprotein shows a negative correlation, while others are positively correlated. There was also an association with smoking, male gender, and higher age. Smokers, males, and individuals in the elderly age group had higher HbA1c levels. Our study is in accordance with the findings of other studies in establishing HbA1c as a cardiovascular risk factor. Stakos had demonstrated that glycated hemoglobin, even in concentration on the higher side of “normal” was independently related to left ventricular mass and aortic function. Higher HbA1c was associated with greater left ventricular mass and pulse wave velocity and lower aortic distensibility in asymptomatic nondiabetic individuals with normal glucose tolerance.7

In our study, we observed that patients who had suffered a myocardial infarction had a statistically significant increase in fasting blood sugar. All these patients were nondiabetics. This finding firmly pointed towards a derangement of glycemic controls, which may well have played a crucial role in the pathogenesis of the disease.

Several studies have shown the presence of increased plasma glucose in patients with acute myocardial infarction. However, the status of previous glucose intolerance was not done. Increased levels of catecholamines and cortisol can be attributed to the increased levels. These, in turn, were either a response to extensive infarction or associated with severe myocardial dysfunction. As concluded by these studies, persistent hyperglycemia in nondiabetic individuals is a significant prognostic factor.5

Dilley et al. studied the association of glycated hemoglobin with cardiovascular disease and metabolic syndrome in south Asian Indians with normal glucose tolerance. They observed that HbA1c played a contributory role in atherosclerosis since even nondiabetic subjects with coronary artery disease had increased levels of GHb.8 Gustavsson et al. had observed that increased HbA1c levels in nondiabetic individuals even within the normal range indicated towards a low degree of inflammatory activity.9,10 A low degree of inflammation plays a central role in atherosclerosis. GHb, by acting as an inflammatory agent brought about a low degree of inflammatory insult to the coronary vasculature.

This view was supported—in the Tromso study conducted by Jørgensen et al. In this study, they examined the association between GHb and carotid artery plaque prevalence and echogenicity in subjects not diagnosed with diabetes.11 They found that HbA1c was strongly and positively related to the prevalence of hard plaques. This observation led them to deduce that there exists a relationship between glycemia and fibrotic process and that glycemia, even at modestly elevated levels, contributed to atherogenesis. Preclinical atherosclerotic markers like carotid intima-media thickness have shown a linear relationship with the severity of glucose intolerance in many studies.11

The inference from all these studies is that the atherosclerotic process starts even before overt clinical diabetes begins. Serum sialic acid is a recently identified risk marker for atherosclerosis and cardiovascular mortality. Råstam et al. in their pioneering work on serum sialic acid concentration and carotid artery atherosclerosis reported for the first time that in both men and women its serum concentration predicted coronary heart disease and stroke mortality independently of serum total cholesterol level, diastolic blood pressure and body mass index.12

Lindberg et al. noted that a positive association exists between sialic acid and carotid artery atherosclerosis. This finding supported the role of sialic acid in atherosclerosis and the risk of death from cardiovascular disease. The study identified sialic acid as a very stable predictor of cause-specific mortality over time.13 In the present study among cases, 44 had high, and 6 had normal sialic acid levels. The mean was 2.62 ± 0.11 mmol/L. In controls, all had normal sialic acid levels. Their mean was 1.89 ± 0.21 mmol/L. The difference of means was found to be significant at the p level of <0.005, as revealed by independent sample t test where cases had higher sialic acid than controls. In our study, we observed that sialic acid levels were significantly increased in patients with myocardial infarction with respect to controls. We noted that it significantly correlated with systolic blood pressure, fasting blood sugar, HbA1c, and lipids. It had a negative correlation with serum HDL supporting the observations by Lennart.

In a separate study done by Selma et al. the serum concentration of total and lipid-associated sialic acid was significantly increased in triglyceridemia. They also reported that sialic acid levels increased proportionally with the number of diseased coronary arteries.17

Our observations show that sialic acid, total cholesterol, and fasting blood glucose were all significantly elevated in nondiabetic myocardial patients with respect to healthy controls. Based on our observation, we conclude that dysglycemia and elevated sialic acid were indeed interlinked in cardiovascular pathophysiology, as noted by other workers. As per our observations, the dysglycemia prior to the cardiovascular event plays a significant role in the pathophysiology. Treatment strategies should be directed to control the levels of dysglycemia for better patient outcomes.

The study has not received any funding. We thank the Institutional Review Board, Department of Cardiology and Department of Biochemistry at Andhra Medical College, for giving appropriate approval to conduct our study.