Maternal thyroid hormone levels during pregnancy play a crucial role in the development of neonates and children.1 Any gestational period thyroid hormone disorder may lead to obstetrical complications along with effects on the fetus.2 Fetal growth is also affected by maternal thyroid levels.3 Various physiological changes, alterations of thyroxine-binding globulins, human chorionic gonadotropin levels, and change of iodide metabolism affect maternal thyroid hormone levels.4 Therefore, to ensure optimal maternal and fetal health, it is recommended to properly assess thyroid function of all pregnant women with a distinct, established reference range other than the one mentioned in the kit literature.

In India and other developing and underdeveloped world countries, the most commonly ordered thyroid function tests are serum total triiodothyronine (T3), total thyroxine (T4), and thyroid-stimulating hormone (TSH) levels. The most-common method followed for these estimations is the enzyme linked immunosorbent assay (ELISA). Though free T3 and free T4 should be done ideally through other better sensitive methods available, due to various socioeconomic conditions, it is not yet possible to use these other methods for large populations.

The purpose of our study was to determine gestational trimester-specific RIs of serum T3, T4, and TSH in Indian pregnant women in Ranchi area.

This study was conducted in the Department of Laboratory Medicine in collaboration with the A and E Department and family outpatient department of the Department of Gynaecology and Obstetrics of a 492-bedded hospital from June 2016 to November 2016. It is a descriptive, cross-sectional, and observational study in the reference group of pregnant women in Ranchi area.

Data were collected on the Monday of each week for a period of 6 months. A total of 240 pregnant women having single intrauterine uncomplicated pregnancy with history of consumption of iodized salt were sequentially enrolled. Data regarding gestational age were determined by the last menstrual period and ultrasonography report. A case record form was filled after detailed history and examination were done by the gynecologist. Written informed consent was taken.

The reference sample group was selected by applying the exclusion criteria on the study population mentioned below:

About 5 mL of fasting venous blood was collected from each participant. The collected blood serum was separated and stored at –20°C within 1 hour of collection.

All data were tabulated into MS Excel and analyzed using Statistical Package for the Social Sciences software version 19. The distribution nature of T3, T4, and TSH values for each trimester was observed by inspecting histograms. Trimester-specific mean (Xm) and standard deviation (Sx) of T3, T4, and TSH were calculated separately. The RIs were calculated by estimating the 2.5 and 97.5 percentile determined as Xm ± 1.96 × Sx. The 0.90 confidence intervals (CIs) were obtained by the formula: Percentile ± 2.81 × Sx/√n.5-8 The analysis of variance test was used to see the significance of differences among the three trimester values. For TSH, nonparametric Kruskal Wallis test was used to compare the changes between trimester values for a level of significance p < 0.05.

Table 2: Trimester-wise reference data for T3, T4, and TSH according to our study 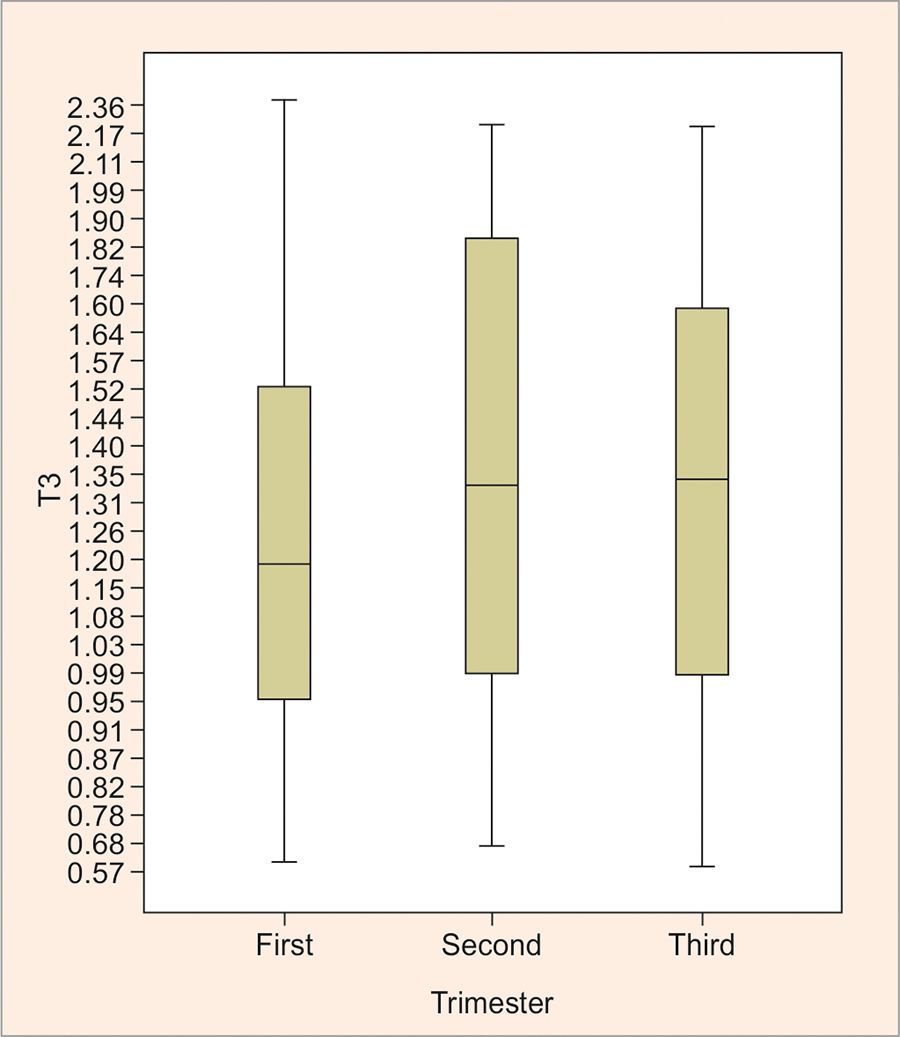 Pregnancy is a crucial stage in the life of a woman. Untreated and undetected gestational thyroid disorders are known to cause many complications like anemia, pregnancy-induced hypertension , hemorrhage, preterm delivery in mothers, and low birth weight, prematurity, congenital malformation, intrauterine fetal death, and lower intelligence quotient in children.12 In recent years, various studies recommend the use of routine thyroid function tests for screening of thyroid disease during normal antenatal checkup.13,14 Hence, selection and proper interpretation of gestational thyroid function parameters are important for the well-being of both the mother and the fetus. This study is the first of its kind in the Ranchi area, and, presently, no such pan-Indian reference population data are available. 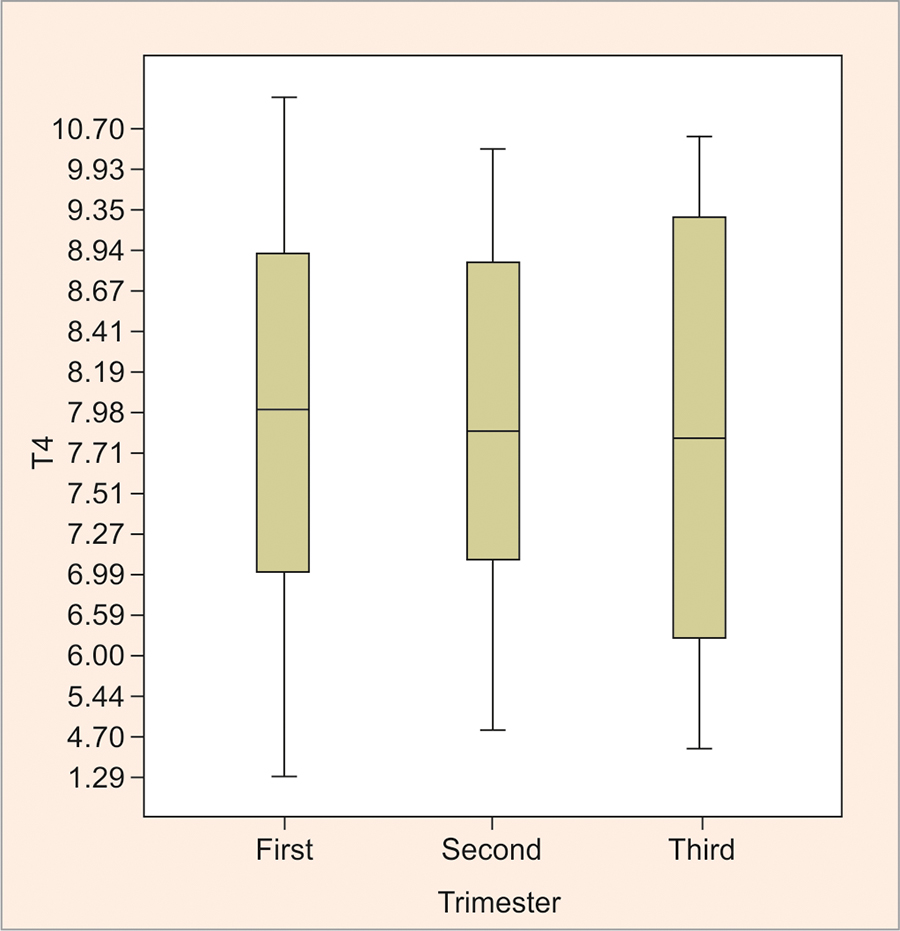 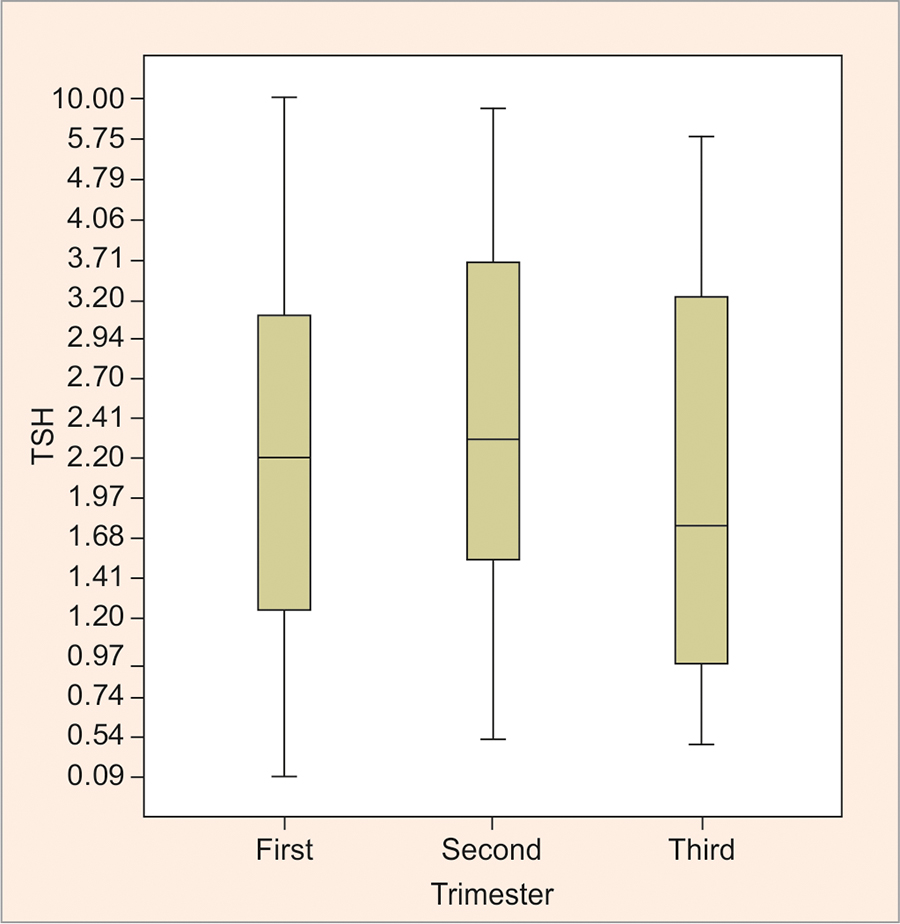 Our study provides trimester-specific RIs of total T3, total T4, and TSH (Table 2). On comparing reference data of one trimester to the other by the t-test, it was found the change was not significant. The RI values provided by the kit manufacturer were generalized and not specific for pregnancy/trimester wise. The RIs of T3, T4, and TSH, as supplied by the kit manufacturer, were 0.52 to 1.85 ng/mL, 4.8 to 11.6 μg/dL, and 0.39 to 6.16 μIU/mL.

According to International Federation of Clinical Chemistry (IFCC) guidelines of reference values and recommendations of Indian Thyroid Society in the line of American Thyroid Association, RI in healthy population is to be determined using stringent specific exclusion criteria.15,16 To fit the criteria, we have used stringent criteria for our reference population selection.

Our laboratory assessments were done by the most commonly used economical ELISA method, using standard instrument and standard kits. Tests were done using accurate and precise methods with proper quality control measures. The statistical strengths are determined by distributions examination and application of proper parametric or nonparametric methods.

Most of the previous such studies have reported trimester-specific reference ranges for free T3, free T4, and TSH among pregnant Indian women.17,18 These studies reported wide variation in parameter ranges due to discrepancies in assay methods, ethnicity of study population along with variations in socioeconomic and nutritional status, reference population selection, and sample size determination criteria.19,20

The strength of our study is that it is based on the population temporarily migrated to Ranchi for professional purposes and which has a pan-Indian profile because of a multicultural, multiethnic, and demographic distribution. The study population is considered relatively healthier than the average general population, resulting in representation of an ideal pan-Indian reference population. We have assessed total T3 and total T4 level by ELISA method, which is the most commonly assessed, economical, and readily available parameters compared with the free T3 and free T4 levels in our country. The limitations of our study are that there is an inappropriate sample size in the three trimesters; the second and third trimesters have very small sample sizes as compared with the first; and sample groups were not the same, i.e., the three trimesters do not have the same antenatal patients, which would have provided better reference ranges. Further follow-up study with more stringent inclusion and exclusion criteria will improve our strength of data and help to provide more conclusive trimester-specific levels.

To conclude, it is important that each laboratory in our country should determine its own population- and method-based RI for diagnosing gestational thyroid disorders. These RIs must preferentially be trimester-specific, most readily available, economical, method-specific, and specific for pan-Indian population. To promote this concept, we have determined our own laboratory-specific, method-specific, trimester-wise RIs for the most commonly used thyroid hormone parameter levels using the ELISA method, and intend to use them for screening of Indian pregnant women.