An African male, aged 58 years, presented with discharging sinus in right knee since 3 months. A comprehensive diagnostic workup was done for the patient at the time of admission, including basic hematological, biochemical, and radiological investigations. Diagnostic imaging studies (X-ray right knee anteroposterior/lateral view) revealed osteomyelitis of right knee. Complete blood count using Sysmex XN revealed erythrocytosis with normal hemoglobin. All blood indices were within normal limits (Table 1). Peripheral smear study showed presence of few scattered sickle cells (Fig. 1). Since there was an index of suspicion of sickle cell disease, taking into consideration the peripheral smear picture and the ethnicity of the patient, high-performance liquid chromatography (HPLC) was run (Bio-Rad D-10), which showed the presence of hemoglobin sickle (with a concentration of 36% with retention time of 4.10 minutes) (Graph 1). Based on this, diagnosis of sickle cell disease was made. 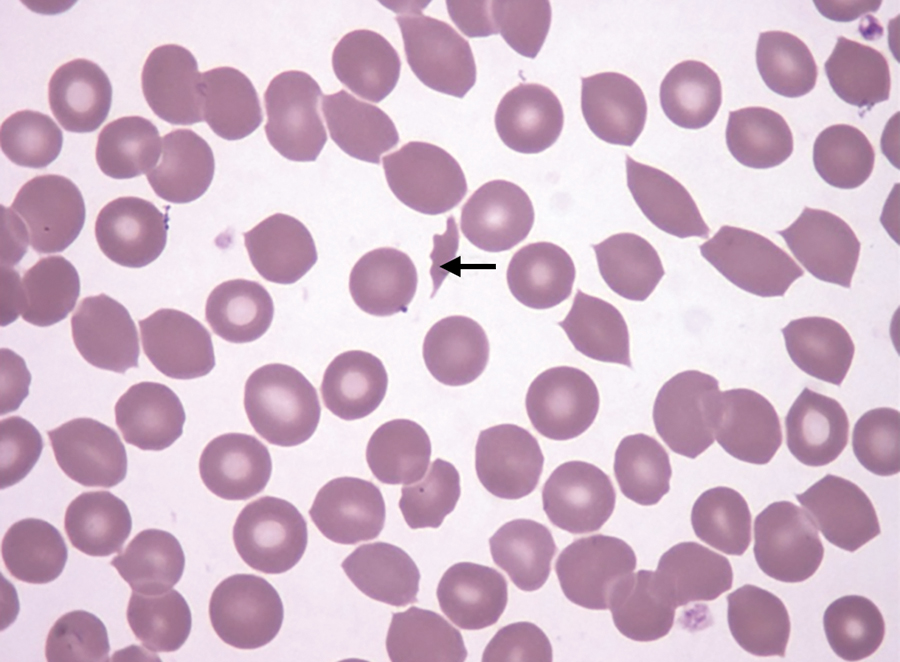 Elution chromatograph of the patient's hemoglobin (Hb) by HPLC with the Bio-Rad D-10 (HbA2 HbF mode). Indicated are the elution times (in minutes) of each Hb species, and the ordinate indicates the proportion of each species present in the sample. The down arrow denotes HbS with a concentration of 36%, eluting at 4.10 minutes 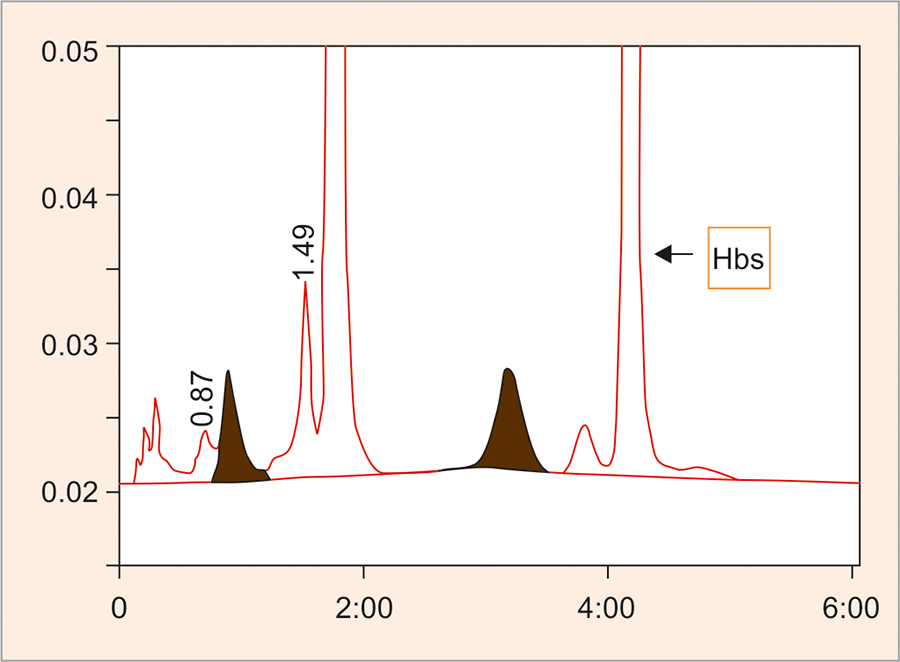 The bifid electrophoretic pattern of albumin fraction seen in serum CZE characterizes a rare condition known as bisalbuminemia. Based on etiology, bisalbuminemia is broadly classified into hereditary and acquired types. Hereditary bisalbuminemia is a rare anomaly which is caused by genetic lesion in albumin gene, commonly a point mutation. The mutation results in codominant expression of albumin mutants along with normal albumin.1 These albumin mutants are classified into two types based on their electrophoretic mobilities: The fast variants and the slow variants.2 Although a significant association of hereditary bisalbuminemia with any clinical condition has not been established yet, several studies have shown its anthropological significance. The literature reported so far shows a high frequency of hereditary bisalbuminemia in small ethnic groups of American Indians,3 apart from which there had been a few studies reporting a rare occurrence in Europe and Asia,4 though there are no reliable studies reporting its occurrence in Africa.

Unlike hereditary bisalbuminemia, the acquired variant is usually transient and has been found in patients with pancreatitis usually complicated by ruptured pseudocysts, monoclonal gammopathies, renal disorders, and those receiving high doses of beta-lactam antibiotics.5,6 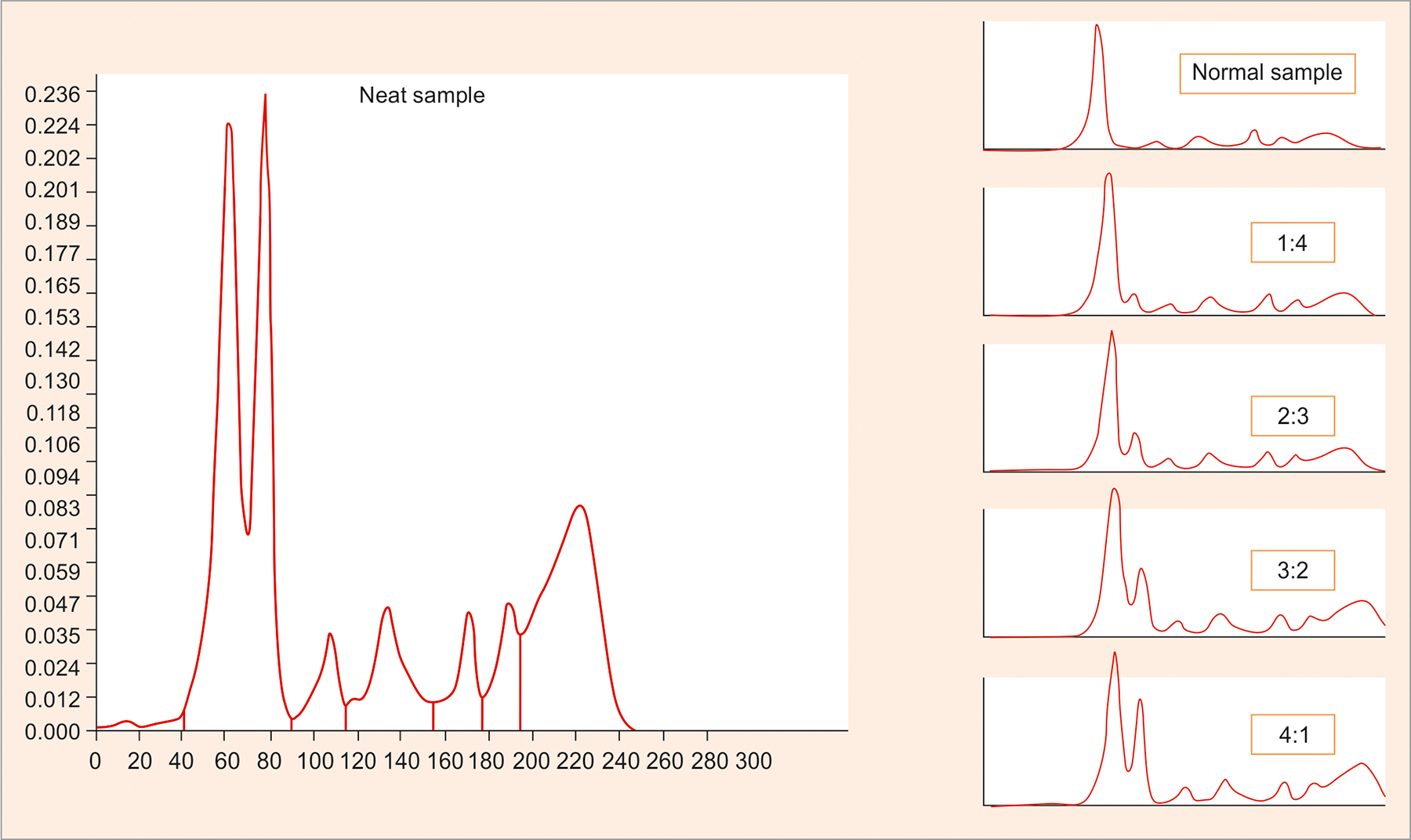 Our case showed bisalbuminemia as an incidental finding associated with a polyclonal gamma peak (Graph 2). A detailed history ruled out the long-term use of beta-lactam antibiotics and relevant investigations were performed to rule out the other possible secondary causes of bisalbuminemia including renal profile, pancreatic profile, serum immunoglobulin quantification, serum free light chain analysis, and beta 2 microglobulin by Vitros 5600. A diagnosis of multiple myeloma was ruled out since the relevant investigations did not reveal a significant anomaly. The cause for a polyclonal peak in gamma region could be explained by elevated CRP.7 All laboratory results were within the normal limits, thereby excluding the possible secondary causes of bisalbuminemia. Hence, a provisional diagnosis of hereditary bisalbuminemia was arrived at by exclusion, though molecular studies are required for confirmation.

An attempt was made to type the albumin variant based on its electrophoretic mobility by a simple experimentation. The patient's serum was pooled with that of a normal serum sample in varying proportions (1:4, 2:3, 3:2, 4:1) and these mixed samples were subjected to electrophoresis along with a normal serum sample serving as the control (MINICAP SEBIA CZE).8 The electrophoretic findings were indicative of fast variant bisalbuminemia and the relative quantities of the fast and the normal albumin fraction were calculated as 53 and 47% (Graph 2).

In our case, we evidenced a cooccurrence of sickle cell disease and bisalbuminemia. But no studies are available on the coexistence of these conditions. A detailed investigation at the molecular level is required for finding relevance of bisalbuminemia to the etiopathogenesis of sickle cell disease, if any. This was not performed due to limited resources in our hospital.

This is a case of fast variant bisalbuminemia reported in an African male with sickle cell disease.

Bisalbuminemia can be seen to occur transiently in a few clinical conditions including pancreatitis which is usually complicated by ruptured pseudocysts, monoclonal gammopathies, renal disorders, and those receiving high doses of beta-lactam antibiotics. Hereditary bisalbuminemia is caused by point mutation in albumin gene, resulting in codominant expression of albumin mutants along with normal albumin.

Authors would like to acknowledge the support of the management of MIOT Hospitals, Chennai, for providing the infrastructure and facilities to carry out this work.