The World Health Organization has described obesity as one of today's most neglected public health problems, affecting every region of the globe.1 The worldwide prevalence of obesity has nearly doubled between 1980 and 2008. Worldwide, at least 2.8 million people die each year as a result of being overweight/obese.2 Obesity has reached epidemic proportion in India with morbid obesity affecting 5% of the country's population. In the World Health Survey, the prevalence of physical inactivity in India was 9.3% in men and 15.2% in women.3 As the rate of obesity climbs, obesity-related diseases and conditions follow with similar rates. The cost of health care is increased and also imposing a huge burden on our economy and health care system.4 Obesity is associated with a number of comorbid conditions, such as diabetes mellitus, hypertension, cancer, dyslipidemia, cardiovascular abnormalities, anemia, obstructive sleep apnea, and psychosocial abnormalities.

The global emergence of obesity and diabetes is as much an economic issue as it is a health issue. Physical inactivity and unhealthy diet are major causes for the change in social and economic conditions.5 The prevalence of raised BMI increases with income level of countries up to upper middle income levels.2 Studies have shown that obesity in males in the reproductive age group has led to an increase in male infertility, which may be associated with decreased pregnancy rates and increased pregnancy loss in couples who undergo artificial reproductive treatment.6,7

As the rate of obesity climbs, obesity-related diseases and conditions follow with similar rates. The cost of health care is increased and also imposes a huge burden on our economy and health care system.4 This study aims at comparing the lipid profile levels of obese and nonobese men.

This study was conducted in men attending the master health checkup program at Sri Ramachandra Medical College and Research Institute, India. Totally, 80 men in the age group of 20 to 47 years, weight > 45 kg, nonsmokers, nonalcoholics, and nondiabetics were included in the study. Women and men with infectious, inflammatory, renal, and cardiac diseases were excluded from the study. The study subjects were divided into two groups. Group I consisted of 40 subjects with normal BMI between 18 and 25. Group II consisted of 40 subjects with increased BMI from 30 and above.

Comparison of BMI between controls and cases

Comparison of lipid profile between controls and cases

The study was conducted after obtaining the ethical clearance from the Institutional Ethics Committee. A written informed consent was obtained from each participant before commencement of study.

The data were collected through a standard questionnaire. All subjects were interviewed regarding full medical history that included age, sex, occupation, family history, and if there was any previous illness. The general physical examination procedure included measurement of blood pressure, height, and weight followed by calculation of BMI . The BMI was measured using the formula, weight in kilograms/height in meters.2 Fasting blood samples were collected from the subjects in yellow-topped gel vacuum tubes. The samples were centrifuged after 30 minutes of collection. Lipid profile parameters, such as TGLs, total cholesterol, HDL cholesterol, and LDL cholesterol were measured in the serum. These parameters were analyzed in Siemens Advia 1800 fully automated analyzer.

All the results obtained were statistically analyzed using SPSS software version 15.0. Mean and standard deviation were found for all parameters. Independent sample t-test was performed to check for the statistical significance for differences in mean between the groups.

The prevalence of obesity has increased dramatically in recent years and is associated with several chronic diseases, such as coronary artery disease, hypertension, metabolic syndrome, and type II diabetes mellitus. Obesity is emerging as one of the major health issues.

Comparison of BMI between controls and cases 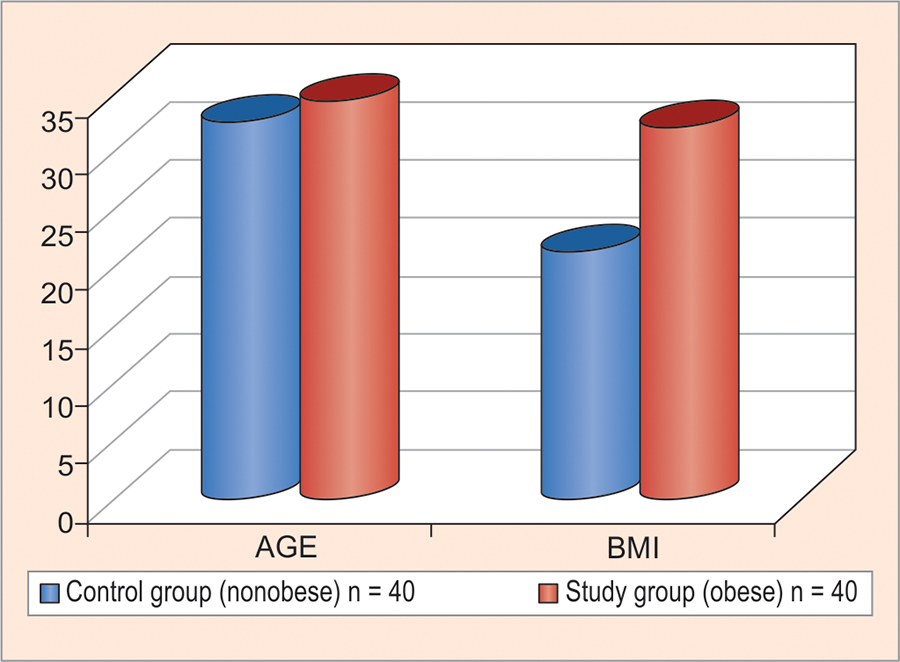 Comparison of lipid profile between controls and cases 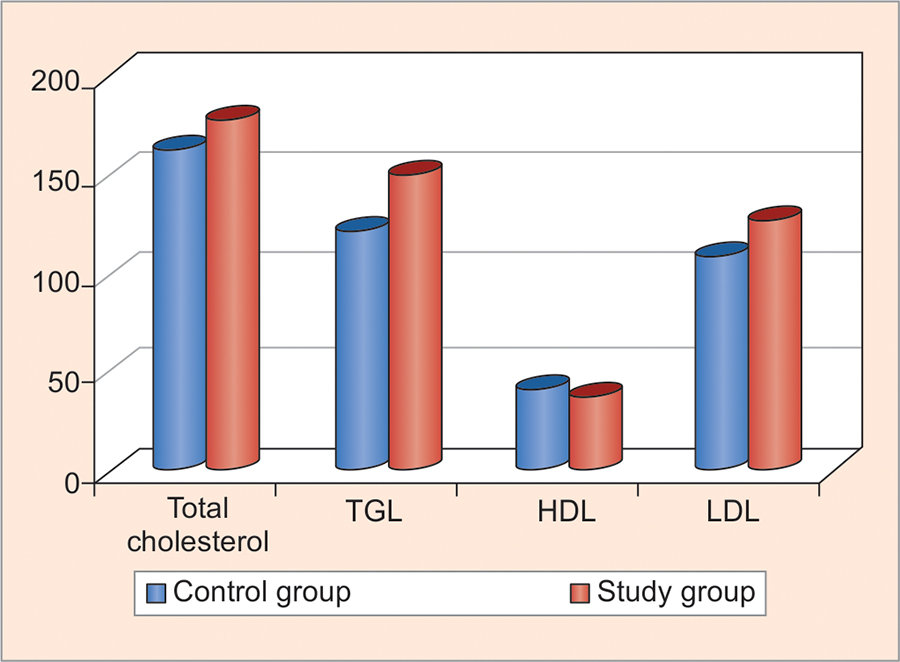 The lipid profile parameters, such as total cholesterol and LDL cholesterol showed a statistically significant difference between the normal BMI group and increased BMI group. The rise in these parameters is associated with increase in the risk of developing atherosclerosis, type II diabetes mellitus, etc. This study was done to see the lipid profile pattern in the men attending master health checkup. Total cholesterol and LDL cholesterol are elevated in these men. The LDL cholesterol is found both within atherosclerotic plaque and in plasma as oxidized LDL, which is responsible for the inflammatory events.8 Awareness about the lipid parameters is necessary to prevent complications. Lifestyle modifications including diet and exercise help in controlling the levels.