Oral squamous cell carcinoma is a common malignancy affecting Asians.1 Among the various known risk factors for OSCC, areca nut chewing is a common occurrence in countries, such as India.2 The increasing incidence of consumption of areca nut has nullified the awareness programs that have only targeted tobacco as a major risk factor. The primary constituent of areca nut—alkaloid arecoline—has been identified as a group I carcinogen. Arecoline has genotoxic, cytotoxic, and mutagenic effect on various cells.3 Studies have implicated areca nut chewing as a cause for submucous fibrosis, oral cancer, hepatocellular carcinoma, carcinoma of cervix, lung, and stomach.4 Areca nut is either consumed in isolation or taken in the form of betel quid along with tobacco, catechu, lime, and sweeteners. This augments the carcinogenicity due to the effect of lime and betel leaf component—safrole.5

Hypoxia-inducible factor-1 alfa is a key transcription factor induced by hypoxia and activates a transcription program that promotes the survival of cells in a hypoxic state. Studies have indicated a plausible role of arecoline in HIF expression through reactive oxygen species (ROS) pathway.6

The present study was planned to evaluate the effect of areca nut consumption on HIF-1α levels. Our hypothesis is that arecoline leads to stabilization of HIF-1α even under normoxic conditions, thereby leading to more aggressive tumors in areca nut chewers.

Fifty healthy age- and sex-matched healthy volunteers from the Department of Biochemistry, Pathology and Dental and Oro-maxillofacial Surgery fulfilling the following criteria:

A total of 10 mL of venous blood sample was collected from the subjects under sterile conditions. The blood samples were processed immediately for separation of serum, which was subsequently aliquoted and stored at −40° C for further analysis. Repeated freeze—thaw cycles were avoided.

All analyses were performed with the SPSS software program version 20. For comparison of variables with a normal distribution, unpaired two-tailed Student's t-test was used; p ≤ 0.05 was considered statistically significant.

Table 1 depicts the demographic characteristics of the study population. The cases and controls were age and sex-matched. A high incidence of the risk factors for oral cancer (intake of alcohol, khaini, tobacco, sharp tooth, regurgitation of food) is seen in the cases with oral cancer. The majority of the patients presented at a later stage and with moderately differentiated tumors as depicted in Tables 2 and 3. The majority of the cancers afflicted the buccal area (Graph 1). Tables 4 and 5 give a detailed description of the stage and grade of tumors in patients with different addictive habits. Graph 2 is an illustration of HIF levels in cases and controls. The HIF levels were higher in patients with areca nut chewing habits as depicted in Table 6.

Areca nut is the fruit of the oriental palm Areca catechu. It is used extensively in Asia in various forms. In India, it is consumed raw, in betel quid, or as paan masala. Paan masala is a dry commercial preparation containing areca nut, catechu, lime, unspecified spices, and flavoring agents. The same mixture with tobacco is called gutka. Due to extensive publicity and affordability, these products are very popular among minors. It is a major risk factor for oral submucous fibrosis and OSCC.7

Stage of OSCC of the cases at the time of presentation 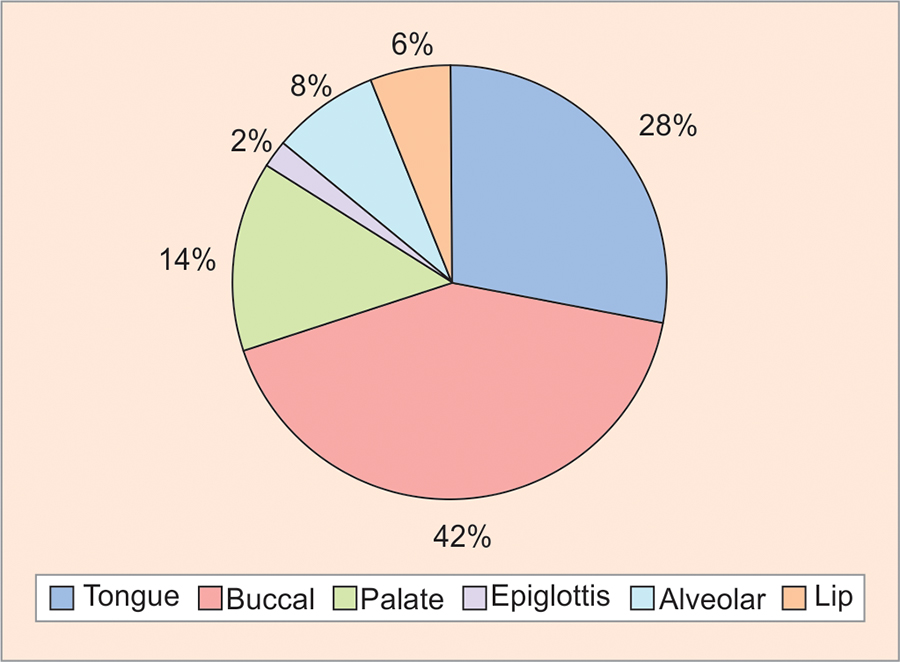 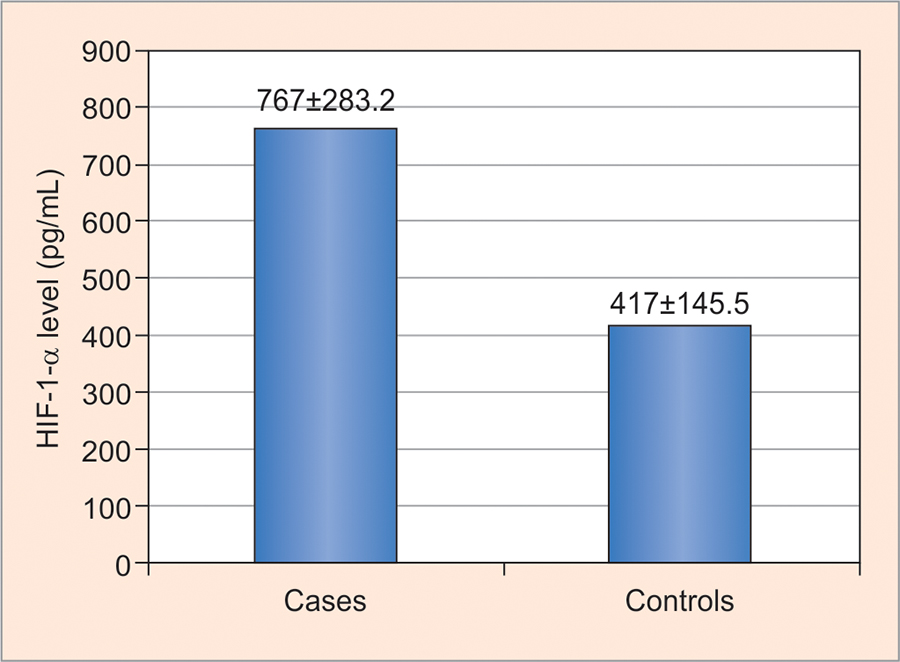 Stage of presentation in patients with different risk factors

Histological grade of presentation in patients with different risk factors

In our study, most of the cases presented to the hospital for initial evaluation during stage III. This can be attributed to ignorance regarding oral lesions. We also tried to evaluate the effect of habits on the stage and histological grade of the tumors. Most of the patients gave a history of more than one habit, and hence, assessment of a single factor on the histological features is not possible. Nonetheless, we observed that areca nut chewing had a synergistic effect with alcohol and smoking with increased incidence of late stage and poor differentiation. This is congruent with many studies conducted in the recent past.8 The problem is more acute in Asian countries due to the age-old custom of betel quid chewing.

The areca nut and/or its constituents (polyphenols and tannins) undergo metabolic activation to produce the active carcinogenic derivatives. Areca nut derivatives cause deoxyribonucleic acid (DNA) strand breaks, mutations, and trigger biochemical changes that promote carcinogenesis.8 Mutations of tumor suppressor genes, such as TP53, BRCA1, and BRCA2 have also been reported in areca nut chewers which adversely affects their tumor suppressive properties.9 Studies have highlighted the role of areca nut extract in induction of free radical generation and oxidative stress.5

Hypoxia-inducible factor-1α is a transcriptional factor, which is activated due to intratumoral hypoxia and plays a significant role in cancer progression and metastasis.19 We studied the serum HIF-1 α levels in patients with histologically confirmed OSCC. The levels were significantly higher in the cases as compared with the healthy controls. Further, on comparison of HIF levels in patients classified according to their addictive habits, we found significantly higher levels among subgroups, who indulged in areca nut chewing along with smoking/alcohol, etc. Our study group had only one patient with isolated areca nut chewing, so the effect on HIF-1α expression cannot be ratified with statistical significance. Nonetheless, the highest concentration was noted in patients with simultaneous smoking, alcohol, and areca nut consumption.

We may conclude that arecoline is a major carcinogen implicated in oral cancer. Potential interplay between nicotine and arecoline has been proved by various studies. The upregulation of HIF-1α by arecoline may be based on the biochemical aggressive tumors in areca nut chewers. Our study highlights the need to pursue awareness programs more aggressively with equal importance to areca nut chewing besides tobacco, which has been in the forefront for OSCC prevention strategies.

Our study has several limitations inherent to its small sample size and lack of follow-up data. Areca nut chewing, smoking, alcohol history was self-reported and therefore, was subject to recall bias. A large-scale prospective trial comprising subjects with addictive habits besides healthy controls and confirmed cases of OSCC with follow-up is necessary to substantiate the findings with reasonable statistical accuracy and clinical relevance.