A national survey in India reported suicide as the cause for 3% surveyed deaths and about half of these deaths were due to poisoning mainly with ingestion of pesticides.1 Organophosphorus compounds are the widely used insecticides in agricultural industry. Easy availability and less awareness regarding the toxicity caused by these compounds have resulted in high morbidity and mortality in India. The OP compounds act by inhibiting the acetyl cholinesterase enzyme at muscarinic and nicotinic receptors, producing an array of symptoms like miosis, bradycardia, increased gastrointestinal motility, emesis, sweating, etc.2

The OP compounds are biotransformed in vivo through oxidative desulfuration and dealkylation to form its oxygen analogs and other active metabolites. These metabolites are potent inhibitors of the enzyme acetyl cholinesterase.3 Detoxification of these active metabolites predominantly occurs through hydrolysis catalyzed by PON enzyme.4 Early diagnosis and initiation of treatment are required to reduce mortality rate for which laboratory evaluation plays a vital role. In addition, various clinical scoring systems are available. Until now, measurement of serum cholinesterase has been considered as the most specific test for OP poisoning.5 Studies in animal models have demonstrated high-density lipoprotein-associated paraoxonase (PON1) as one of the important determinants of an individual's sensitivity to some OP insecticides.6-8

Despite having convincing evidence in animal models, very few epidemiological studies have examined PON status as a determinant of severity of acute OP poisoning. The present study was aimed to examine the utility of serum PON levels with reference to severity of the poisoning in humans with acute exposure to OP compounds and correlate the PON activity with serum cholinesterase levels and POP scale.

A cross-sectional study was carried out at a rural tertiary care teaching college and hospital for a period of 2 months. Forty acute OP poisoning cases admitted in emergency unit with diagnosis confirmed by circumstantial evidence, history, and clinical examinations were included in the study, and formed the “convenience sample.” Study subjects of either gender in the age group 18 to 50 years were included. Patients with history of other poisoning, psychiatric disorders, pregnancy, and other illness, such as chronic renal failure, diabetes mellitus, epilepsy, and myopathy were excluded from the study.

Under aseptic precautions, 5 mL of blood was drawn at the time of presentation from all the study subjects. Serum was used for the estimation of cholinesterase, for both basal and salt stimulated paraoxonase (PON) activity. Cholinesterase activity in serum was estimated by kinetic colorimetric method using Agappe liquichek cholinesterase kit, which is based on new Deutsche Gesellschaft Fur Klinische Chemie recommendations.9,10 The PON activity was determined spectrophotometrically by using p-nitro phenyl acetate as a substrate.11,12 The POP scale13 was used for categorizing patients into mild (0—3 score), moderate (4—7 score), and severe (8—11 score) poisoning. An informed consent was taken from all participants and all the experiments involving human subjects were carried out in accordance with the protocol approved by Institutional Ethical Committee.

Data were entered into the excel sheet. The entire variables were tabulated, and mean and standard deviation (SD) were calculated for age, serum cholinesterase, and PON. Comparison of means between the groups was done using analysis of variance (ANOVA). Correlation analysis between serum PON levels with serum cholinesterase and severity of the disease was done using Pearson's correlation coefficient. The p-value less than 0.05 was considered statistically significant. All statistical analysis was done using Statistical Package for the Social Sciences software version 18.

Serum cholinesterase and PON activity were determined in the study participants, who had acute exposure to OP compounds. Majority (70%) of the study participants belonged to 21 to 40 years age group (Table 1). The mean age of the study participants was 31.9 ± 14.42 years. 75% (n = 30) of the participants were males and 25% (n = 10) were females. The mean serum cholinesterase levels among subjects was 4709 ± 2829.69 U/L and mean serum basal and salt-stimulated PON levels were 55.33 ± 12.42 nmol/mL/minute and 48.68 ± 16.46 nmol/mL/minute respectively (Table 2). The mean age was higher in severe poisoning group when compared with other two groups mild and moderate poisoning group (Graph 1). Chlorpyrifos was the most common OP compound consumed (45%) followed by Malathion (22.5%), Diazinon (7.5%), fention (7.5%), Dichlorvos (5%), and other OP compounds (12.5%); (Table 3). There was statistically significant decrease in the serum cholinesterase activity (p = 0.001) and salt-stimulated PON activity (p = 0.016) as the severity of disease increased (Table 4 shows results of ANOVA). Serum cholinesterase and POP score showed negative correlation and was statistically significant (p = 0.0036).

Mean age of the study participants in the three groups 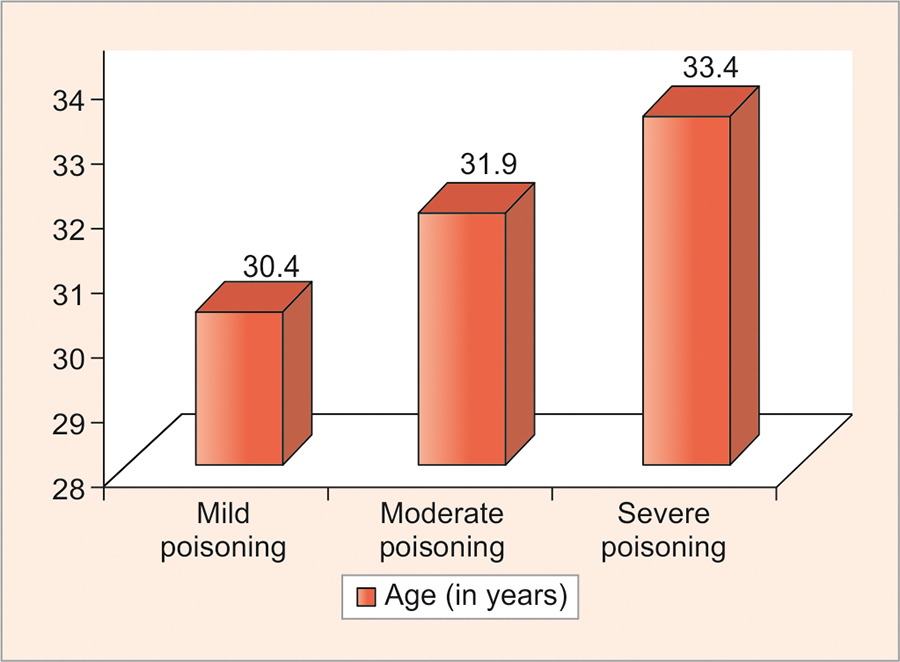 Details of OP compound consumed by the study participants

In the present study, the serum cholinesterase level was low in severe poisoning group when compared with mild poisoning and moderate poisoning groups. The decrease in this enzyme level was statistically significant (p = 0.001) and is in accordance with few other studies done in South India in subjects exposed to acute OP compounds toxicity.14,15

The quest for newer and specific biomarkers in relation to OP poisoning started quite a long time back. In this regard, many studies have proposed that measurement of PON status is a reliable marker to assess susceptibility to OP poisoning.16,17

In many animal models, association between PON1 status and severity or susceptibility to OP poisoning has been well characterized.6,7,16 Several studies in individuals with chronic exposure to OP compounds have demonstrated high risk of OP toxicity and low levels of PON enzyme activity.18,19

However, there are very few epidemiological studies done in humans to explore the PON status in acutely exposed OP poisoning individuals. In the present study, the levels of both basal and salt-stimulated PON activity decreased from mild to severe poisoning group, but this decrease was statistically significant only with salt-stimulated PON activity. This difference in the salt stimulation can be attributed to the large variation of genetically determined serum PON1 activity in the human population. Also Akgur et al20 proposed that individuals with low PON1 activity on salt stimulation also had low cholinesterase activity and are more susceptible to OP poisoning. Ceron et al21 in their review have reported that when NaCl was used with paraoxon as substrate for phenotype characterization, it increases the PON1 activity, but when used with other substrates, such as phenyl acetate, it produces a decrease in PON1 activity.

Animal models have demonstrated that the animals with low levels of PON enzyme activity in their sera are very much susceptible to OP poisoning,22-24 and by increasing the levels of this enzyme by intravenous injection of partially purified PON1, it has thrown some light on the protective role of PON against OP toxicity.25,26

Studies done on birds have shown that low PON1 activity displayed higher sensitivity to OP.27 Further studies22,23 have demonstrated that administration of exogenous purified PON1 has increased the resistance to the toxic effects of OPs among mice and rats and also offered protection against toxic effects of Chlorpyrifos when given within 3 hours of OP exposure.26

Recently, it has been projected that administration of recombinant human PON1 to mice has resulted in protection against the toxicity of Chlorpyrifos.28 All these studies indicate that by artificially modulating the levels of PON1 in serum, it is possible to decrease the toxicity of certain OP compounds. Series of research done on genetically modified mice for the expression on human PON1 genes and its effect on OP toxicity6,7 has provided convincing evidence for extrapolating these results to humans.

According to the present study, results of PON activity, both basal and salt stimulated, showed linear positive correlation with serum cholinesterase levels, but was statistically significant with only salt-stimulated activity (p = 0.0057). This result indicates the association between serum PON and serum cholinesterase and is consistent with the results of few others,15,18,29 but not all.30,31

These conflicting results may be due to difference in the study population, type, and duration of exposure and presence of PON gene polymorphism. The most common PON1 gene polymorphism due to substitution at position 192 (PON1Q192R) directly affects its hydrolytic efficiency. The alloform PON1QQ192 detoxifies Chlorpyrifos and diazoxin more efficiently than paraoxon, which is rapidly hydrolyzed by PON1RR192 alloform.32,33

Individuals with low serum cholinesterase activity also had low levels of PON activity belonging to severe poisoning group suggesting that these individuals are more susceptible to OP poisoning than those with higher levels of PON and serum cholinesterase activity. This indicates that hydrolysis of OP compound by PON is a major factor determining the toxicity.34 Hence, estimation of serum PON along with serum cholinesterase might throw some light in predicting and assessing the detoxifying capacity of patients, thereby, aiding in treatment protocol of patients with acute exposure to OP compound.

The present study revealed that estimation of serum PON activity determines the OP toxicity; thereby, it helps in predicting the severity of OP poisoning. The PON is proved to be a good surrogate for cholinesterase activity in serum. The results suggest that the patients with higher levels of PON activity may have substantially better detoxifying capacity against OP compounds. However, the direct and conclusive confirmation in human of the relevance of PON1 status in determining relative sensitivity to OP toxicity is still lacking. Further research can be undertaken to investigate the same in future.

We acknowledge all the participants for their cooperation. We are thankful to the ICMR under STS project (ID -2016-03799) for approving and granting this study and also the institution for supporting us in conduction of this study.