Diabetes is the most common endocrinal disorder seen in clinical practice. India has already become the “diabetes capital” of the world with over three crore affected patients. Between 1995 and 2025, there is a prediction of a 35% increase in the worldwide prevalence of diabetes. The rising number of people with diabetes will be mainly in populations of developing countries, leading to more than 300 million people with diabetes globally by 2025. The disease has tremendous impact on the quality-of-life. Morbidity and mortality occur due to complications that affect the small vessels resulting in retinopathy, nephropathy, and neuropathy and large vessels resulting in ischemic heart disease and stroke.1

In diabetes mellitus, lipid abnormalities are almost the rule. Typical findings are elevation of TC and VLDL-C, TG concentration, exaggerated postprandial lipemia, lowering of HDL-C and a predominance of small dense LDL particles.2 Triglyceridemia has been associated with increased risk of coronary heart disease both in nondiabetic and diabetic subjects.3,4 Remnants of TG-rich lipoproteins seem to be extremely atherogenic.5 The LDL-C is related to lifestyle factors, such as diet and exercise.6 It has been associated with metabolic syndrome.7 The proatherogenic properties of small dense LDL particles may relate to their ability to penetrate the arterial wall, thereby, making them more susceptible to oxidation, and thus, indirectly linked with CAD.8,9 The CAD represents a wide spectrum of diseases ranging from angina pectoris, myocardial infarction, and sudden death due to silent myocardial ischemia. Silent myocardial ischemia has a reported prevalence of 10 to 20% in diabetic population as compared with 1 to 4% in nondiabetic population.10

Magnesium is an important intracellular cation, i.e., distributed in three major compartments: Mineral phase of bones (65%), intracellular space (34%), and extracellular fluid (1%). About one-third of extracellular magnesium is bound to plasma proteins; the rest is free and presumably biologically available. In several studies, reduced magnesium concentration has been observed in diabetes mellitus. Despite good nutritional status of diabetics, low magnesium level probably results from glycosuria-related hypermagnesemia, nutritional factors, or hyperinsulinemia. There is a link between hypomagnesemia and reduction of tyrosine kinase activity at the insulin receptor level. This may result in impairment of insulin action and development of insulin resistance. Various evidences suggest that magnesium supplementation could be useful in the treatment of diabetes and to prevent the development of its chronic complications.11

This cross-sectional study was carried out in a civil hospital at Ahmedabad, India. It included 60 cases of diabetes mellitus that had come to the diabetic clinic of the hospital and 50 apparently healthy subjects as a control group. The patients were primarily diagnosed by clinical examination and evaluated by investigations. The subjects in the control group were selected from the healthy subjects. The blood samples were drawn from all the patients after a minimum 12 hours of complete fasting. About 5 mL of blood samples was obtained from cases and control subjects. The blood samples were centrifuged at 5000 rmp for 10 minutes at room temperature within 1 hour of collection. The serum thus obtained was analyzed for FBS by glucose oxidase—peroxidase method, TC by cholesterol oxidase/peroxidase—p-aminophenazone method, TG by glycerol-3-phosphate oxidase/phenol + aminophenazone method, HDL-C and LDL-C by direct enzymatic method, and magnesium by Calmagite method. Student's t-test was used for comparison of the mean values in independent groups. Pearson's correlation coefficients were calculated for the different variables. A p-value of <0.05 was considered statistically significant. All statistical analysis was carried out using the software known as Graphpad Prism version 5. 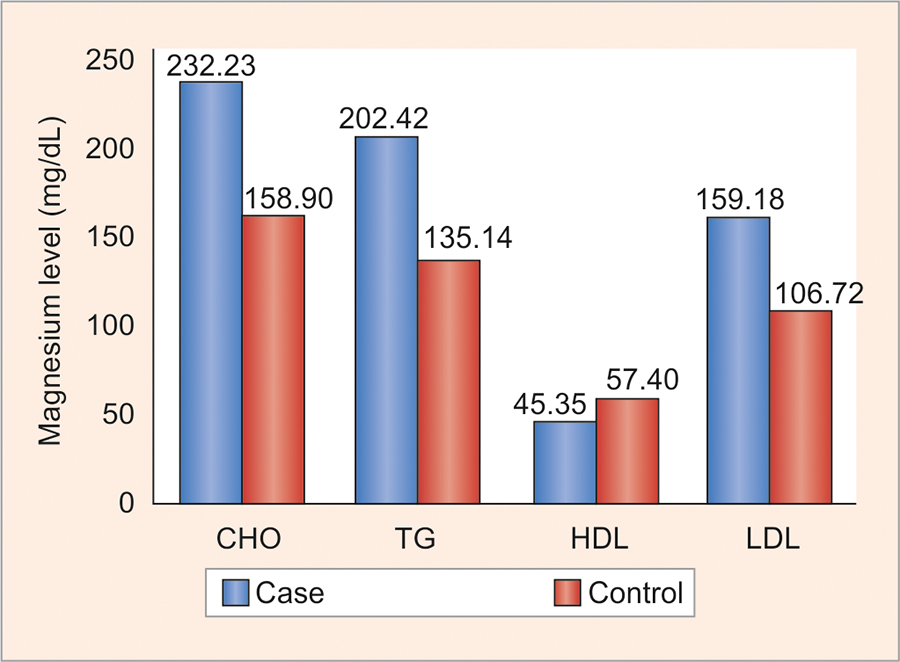 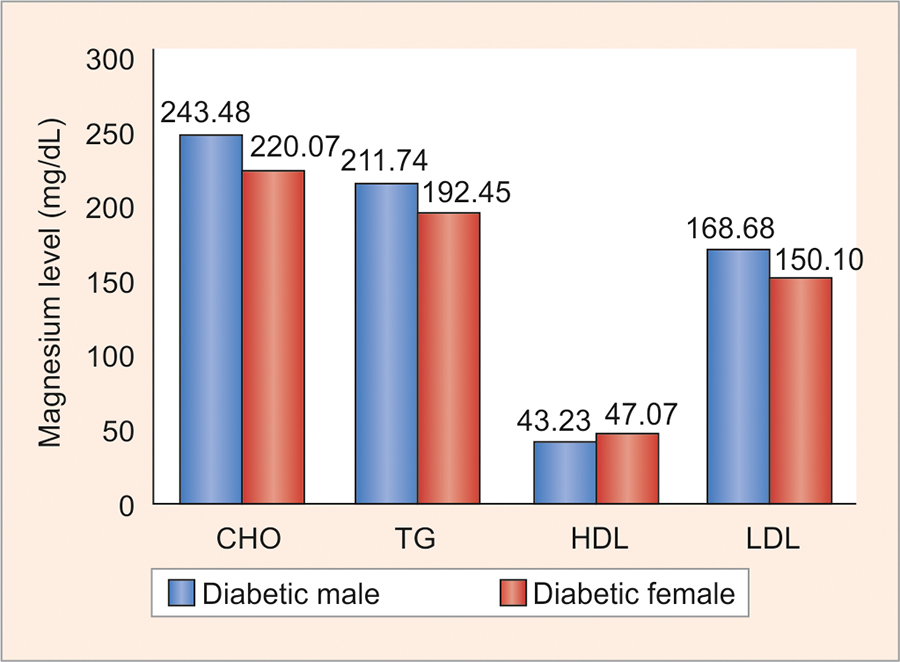 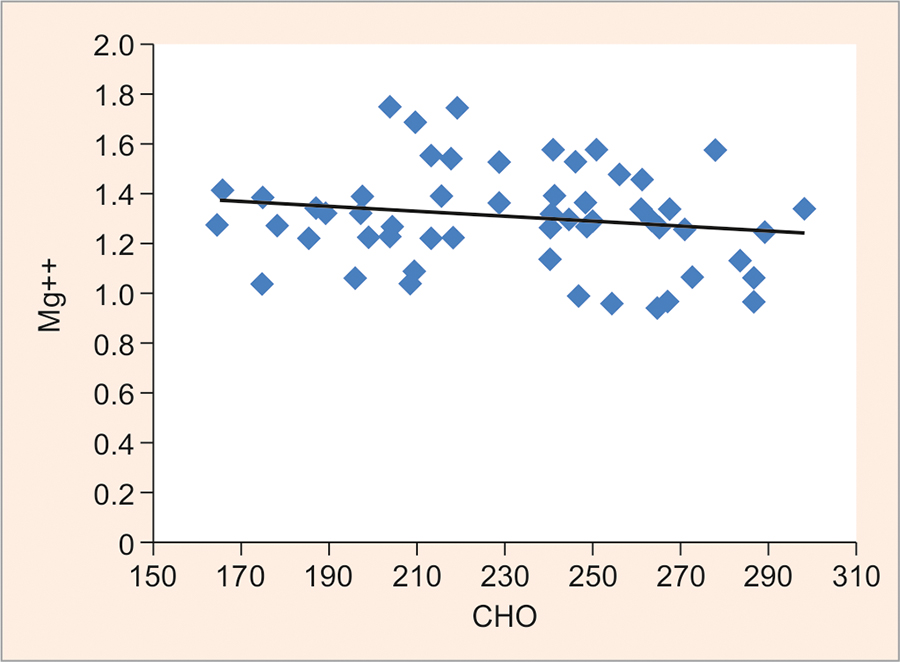 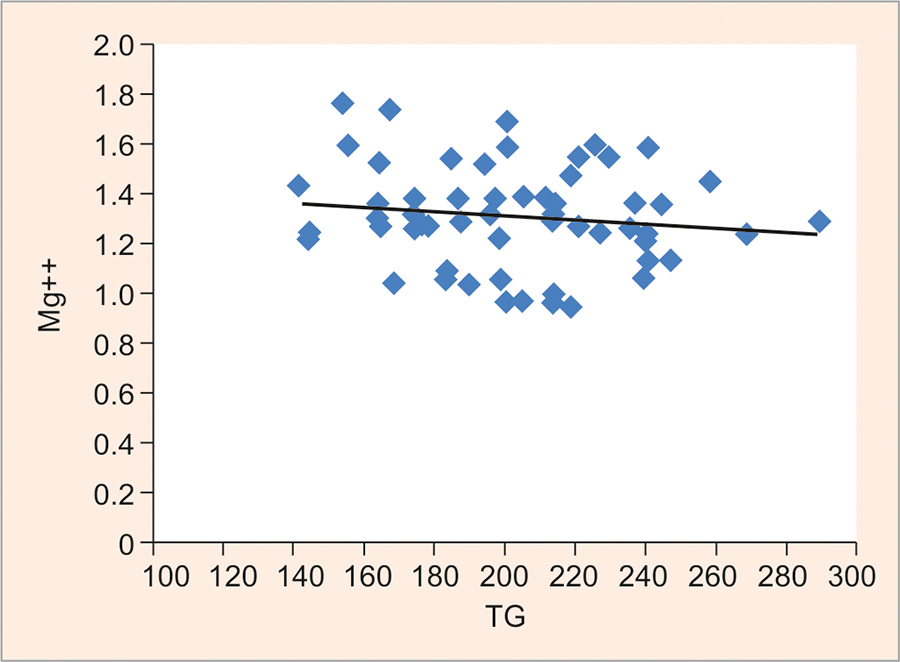 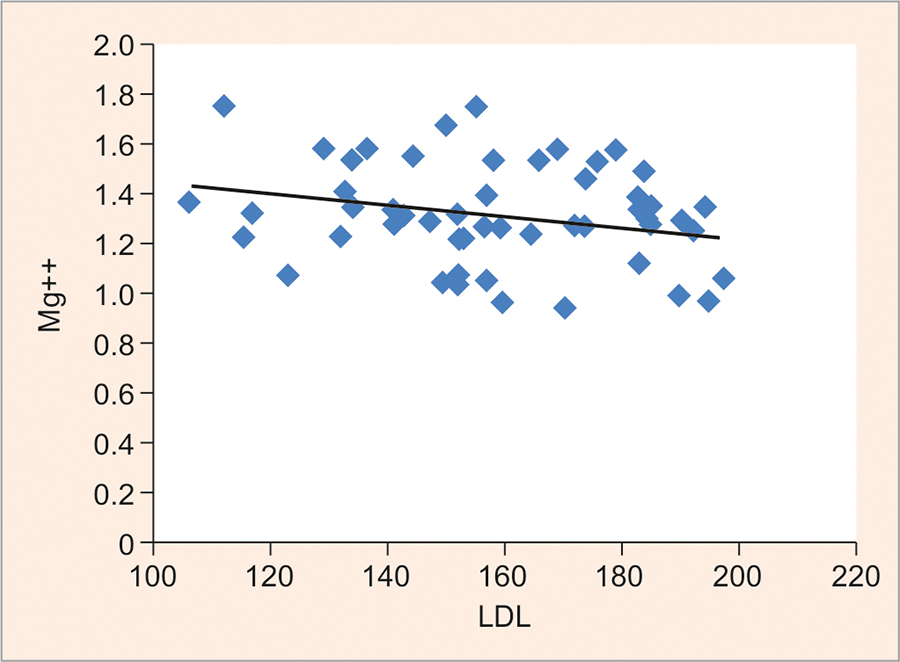 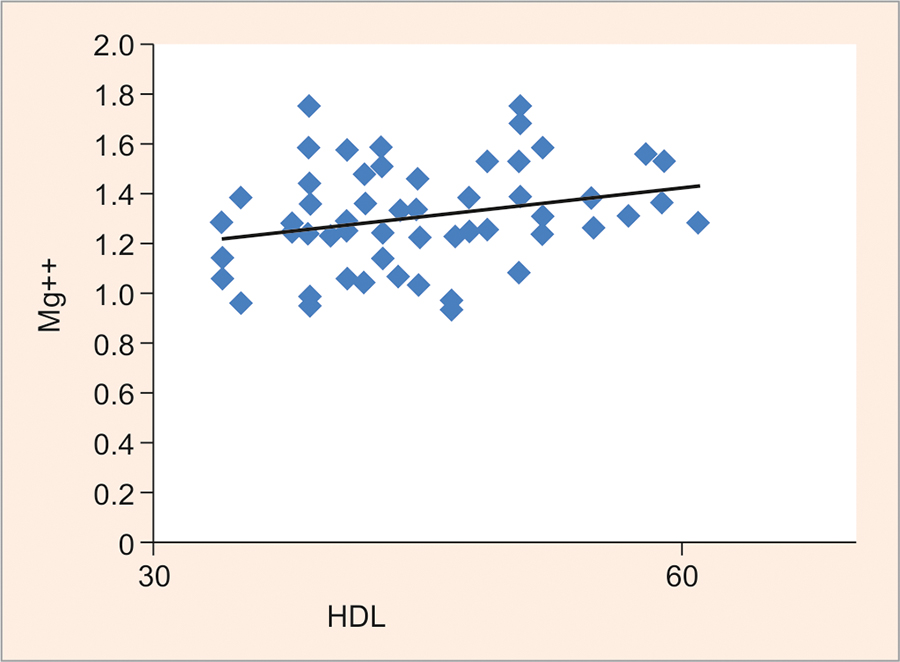 In the present study, the majority of diabetic patients have higher levels of cholesterol, TGs, LDL-C, and lower level of HDL-C than healthy group. This is consistent with other studies.12-15

Accelerated coronary and peripheral vascular atherosclerosis is one of the most common and serious chronic complications of long-term diabetes mellitus. Along with the risk factors, such as hypertension, smoking, obesity, etc., secondary hyperlipidemia has gained significance as an etiologic risk factor for accelerated atherosclerosis. Hyperlipidemia as a metabolic abnormality is frequently associated with diabetes mellitus. Its prevalence is variable, depending on the type and severity of diabetes, glycemic control, nutritional status, age, and other factors. The patients with diabetes have a higher degree of atherosclerosis burden due to dyslipidemia than healthy people.16

Diabetes mellitus increases the risk for atherosclerotic vascular disease. There is a twofold to fourfold excess risk of CAD in diabetes mellitus compared with nondiabetic patients. Indeed, 75 to 80% of adult diabetic patients die of CAD, cerebrovascular disease, peripheral vascular disease, or a combination of these conditions. Patients with diabetes can have many lipid abnormalities, including elevated levels of cholesterol, LDL-C, and TGs; and low HDL-C. Lipid abnormalities may be the result of the unbalanced metabolic state of diabetes (i.e., hyperglycemia and insulin resistance) and improved control of hyperglycemia does moderate diabetes-associated dyslipidemia. However, in diabetics, the LDL-C fraction contains a greater proportion of small dense LDL particles, which are believed to be more atherogenic.17

A strong clustering risk factor for CAD has been observed in diabetic subjects. In diabetes, many factors may affect blood lipid levels. This is because carbohydrates and lipid metabolism are inter-related. If there is any disorder in carbohydrate metabolism, it also leads to a disorder in lipid metabolism. Thus, there is a high concentration of cholesterol and TGs and, due to this, there is a reduction in HDL-C levels. In diabetic subjects, gender plays a significant role on risk of CAD. The diabetic males have moderately higher serum lipid levels as compared with diabetic females. Significant difference in lipid profile of male and female diabetics is because sex hormones play a unique role for lipid metabolism.15

Correlation between magnesium and lipids in control and case groups

Patients with diabetes tend to be dyslipidemic with high TC, TG, LDL-C, and low HDL-C concentrations, which are recognized risk factors for CVDs. Although many factors play roles in the accelerated atherosclerosis observed in diabetes, lipoprotein abnormalities are key contributors. The LDL-C, the main cholesterol-bearing lipoprotein, is a major determinant of atherosclerosis in patients with diabetes. Elevated LDL-C is also associated with an increase in prothrombotic and procoagulant factors. Because of many lipoprotein abnormalities in diabetes, an easily measuring composite indicator may be useful to treat patients with diabetes. Recently, attention has been focused on HDL-C level in the blood. A high HDL-C fraction gives protection against atheroma formation and thus, ischemic heart disease. The HDL-C acts by enhancing the removal of cholesterol from the peripheral tissues and so reduces the body cholesterol pool.12

The principal finding of the present study is a significant decrease in serum magnesium levels in the case group, which is correlated with Tripathy et al18 and Rusu et al.19 The magnesium depletion is more likely caused by osmotic dieresis, then caused by the indirect hormonal, vitamin C, or ionic effects. Hypomagnesemia represents a risk factor in diabetic retinopathy and tends to decrease the hypoglycemic action of insulin.19

In the present study, there is a significant inverse correlation of serum magnesium with cholesterol, TG, and LDL-C. Magnesium deficiency in humans is unlikely to occur from simple lack of food containing these minerals except in advanced forms of malnutrition according to the consensus of a panel on magnesium metabolism in diabetes mellitus. Diabetics have an additional risk factor for hypomagnesemia and magnesium status. Magnesium may also play a role in the release of insulin. Magnesium depletion also has an atherogenic potential. The mechanism of long-term complication of diabetes is not clearly explained, and hypomagnesemia may be a contributing factor to these complications, particularly ischemic heart disease, retinopathy, and bone loss.11

The major highlights of the current study are lower magnesium levels in cases compared with controls. In the current study, the serum magnesium level has been found to be inversely related to cholesterol,TGs, and LDL-C levels. However, it is directly associated with HDL-C level. Hence, it could play a role in controlling the risk of CAD-associated morbidities in future. Therefore, this study suggests the importance of magnesium supplementation in diabetics to prevent the development of its chronic complications, such as CAD. However, separate studies need to be carried out to see the impact of magnesium supplementation on the lipid profile of diabetics in a large population.