Lymphatic filariasis is a mosquito-borne disease and a major public health problem affecting nearly 120 million people across the world caused by Wuchereria bancrofti, Brugia malayi, and Brugia timori. In India alone, about 554.2 million people are reported to be at the risk of infection, with 27 million actually carrying Mf in blood and another 21 million suffering from clinical (CL) manifestations like hydrocele, lymphedema, and elephantiasis.1-3 The World Health Organization has launched the Global Programme for the Elimination of Lymphatic Filariasis (GPELF) and the target of the Global Programme is to eliminate lymphatic filariasis by the year 2020 through mass drug administration and alleviation of disability.4,5

The diagnosis and monitoring of filariasis has conventionally relied upon microscopic detection of Mf in peripheral blood, which is unreliable and lacks sensitivity. Further, the limitations associated with CL diagnosis, such as inconsistent symptoms and atypical manifestations seen in occult cases in the absence of Mf call for the need to develop suitable specific and rapid immunodiagnostic assays for control programs, particularly GPELF, and for mass surveys of community for filarial prevalence.6-8

Immunodiagnosis based on parasite antigen detection are considered to be very useful for the detection of active infection in filariasis. Extensive studies have been conducted to identify and isolate the filarial antigens of immunodiagnostic use.9 Though native antigens like Mf excretory—secretory antigens or purified somatic antigens have been shown to be quite useful for detecting circulating filarial antigen in bancroftian filariasis, one of the major problems is in the large-scale preparation of these antigens with consistent quality for bulk preparation of commercial diagnostic kits.10

In the light of the above facts, the present study was done to generate monospecific polyclonal antibodies to recombinant filarial antigen rWbL2 and comparatively evaluate their diagnostic utility to detect circulating filarial antigens in infected cases.

Blood samples were collected from Mf individuals and patients with CL filariasis in Sevagram and surrounding villages in Maharashtra State, India, which are endemic for nocturnally periodic W. bancrofti. The presence of Mfs was checked by examining fresh night blood (collected between 9.00 pm and 2.00 am) preparations. After informed consent, sera were collected from 25 Mf patients and 25 CL filariasis individuals manifesting hydrocele, lymphedema, and elephantiasis. Blood samples were also collected from 25 healthy individuals (EN—endemic normals), who had lived in a filarial endemic region for over 5 years and had no history of filariasis and from 15 students volunteers arriving at the Mahatma Gandhi Institute of Medical Sciences in Sevagram (at the time of their arrival) from places like Chandigarh, Kashmir, etc., where there is no filariasis (NEN—nonendemic normal). Sera were separated and stored at −20°C with sodium azide as preservative.

The recombinant gene constructs pRSET-B WbL2 were maintained in Escherichia coli host TOP10F, i.e., deficient in T7 polymerase and, hence, the proteins were not expressed. For expression studies, the gene constructs pRSET-B WbL2 was transformed into BL21(DE3)pLysS, which contain a chromosomal copy of T7 ribonucleic acid polymerase, under the control of UV5 promoter and, hence, used for the expression of genes cloned under T7 promoter.12 Cloned genes were induced with gratuitous inducers, such as isopropyl β-D-1-thiogalactopyranoside (IPTG) at a final concentration of 1 mM. Purification of recombinant proteins was done by immobilized metal affinity chromatography (IMAC).

The BALB/c mice and rabbits were bred conventionally at our institutional animal house, which is registered with the Committee for the Purpose and Control of Supervision on Experimental Animals.

Around 6 to 8-week-old BALB/c mice and rabbits of 1 year old were used for immunization with rWbL2 following standard immunization protocol as described by Catty and Raykundalia.13

Five BALB/c mice in each group were immunized intraperitoneally with rWbL2. The immunization schedule consisted of an initial dose of 15 μg antigen in 100 μL of 0.05 phosphate-buffered saline (PBS) emulsified in an equal volume of Freund's complete adjuvant. This was followed by three more booster doses of rWbL2 (15 μg each) emulsified in Freund's incomplete adjuvant at intervals of 7 days.

Two rabbits in each group were immunized with rWbL2 antigen following the schedule given below using Freund's complete (200 μg subcutaneous for first dose) or in incomplete adjuvants (for subsequent doses) as described in the protocol of Pocono Rabbit Farm and Laboratory Inc, Canadensis, Pennsylvania.

Sera were collected from mice/rabbits, prior to first dose and 3 days after the final dose of immunization schedule, from ear marginal veins of rabbit and from tail of BALB/c mice. Sera were separated and antibody titers were checked. The immunoreactivity of these antibodies (mouse and rabbit anti-rWbL2 antibodies) was tested against the purified WbL2 by Western blot, and the antibody titers were determined by ELISA.

The wells in polystyrene microtiter plates (NUNC, Denmark) were coated with 100 μL of capture antibodies (FSIgG at 60 ng/100 μL/well or mouse anti-rWbL2 antibodies at 1:1,000 dilution) in 0.06 M carbonate buffer, pH 9.6 at 4°C overnight. The wells were washed one time with PBS Tween 20 (PBS/T) and then blocked with 100 μL of 2% bovine serum albumin at 37°C for 1 hour. The wells were washed again three times with 0.01 M PBS having 0.05% Tween 20 at 1 minute interval and incubated each well with 100 μL of optimally diluted sera (1:10) at 37°C for 1 hour. The wells were again washed three times at 1 minute intervals and further incubated with optimally diluted 1:10,000 probing antibody (rabbit anti-WbL2 antibody in PBS/T) at 37°C for 1 hour. After five washings with PBS/T, the wells were incubated with 100 μL of optimally diluted (1:25,000) goat antirabbit horseradish peroxidase conjugate for 45 minutes. Following final washing, each well was incubated with 100 μL of substrate consisting of tetramethylbenzidine/H2O2 substrate as 1 in 20 dilutions in double distilled water for 15 minutes. Reaction was stopped by adding 50 μL of 2N H2SO4. The results were read at 450 nm using ELISA reader. Sera samples showing absorbance value equal to or higher than the mean + 2 standard deviation absorbance of NEN sera were considered as positive. 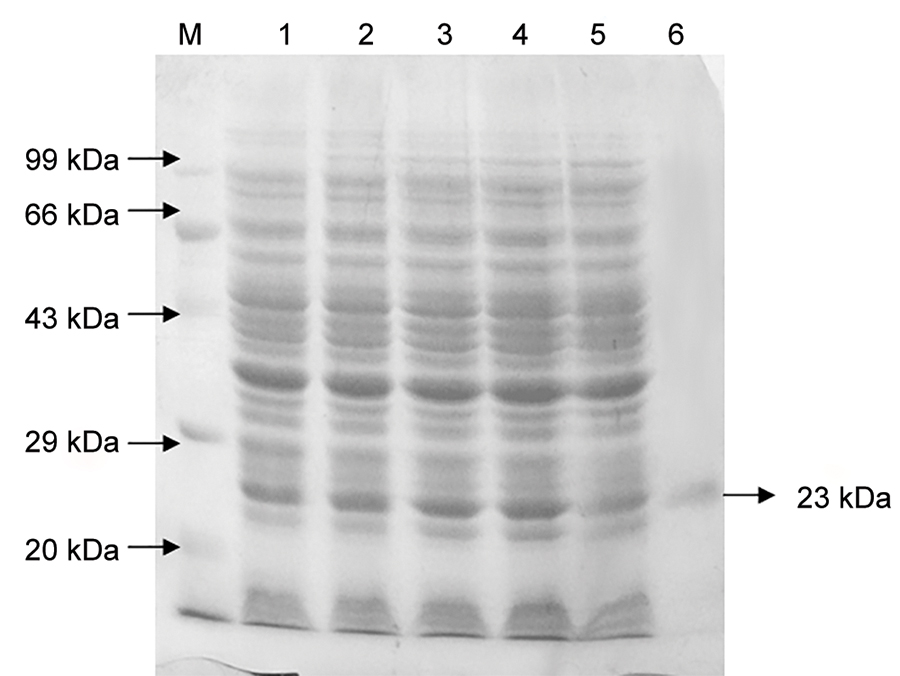 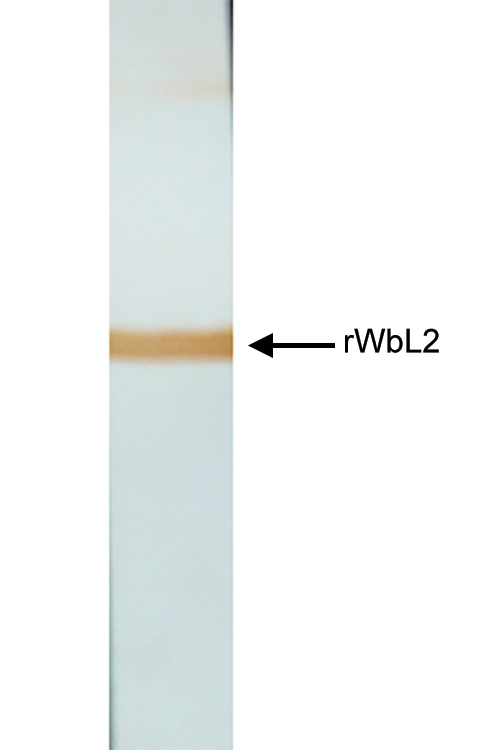 Filarial antigen levels in different filarial endemic groups (25 in each group, i.e., Mf, CL, EN, and 15 in NEN) of filarial patients were analyzed using Statistical Package for the Social Sciences version 16.0 software and the tests of significance were tested at p < 0.01 and p < 0.05 by independent t-test.

The gene constructs of pRSET-B WbL2 were transformed into E. coli BL21(DE3)pLysS cells and the cloned genes were induced with 1 mM IPTG. The rWbL2 antigens were expressed as hexahistidine tagged proteins with molecular weights of 23 kDa in sodium dodecyl sulfate polyacrylamide gel electrophoresis (SDS-PAGE; Fig. 1). The same was confirmed by Western blotting using anti-His antibody as probe (Fig. 2). In the first part of the study, rWbL2 were expressed and used to immunize both rabbits and BALB/c mice to raise antibodies. Immunization of BALB/c mice and rabbits with rWbL2 yielded high antibody levels. The immunoreactivity of these antibodies [rabbit and mouse specific anti rWbL2 antibodies] was tested against the purified rWbL2 by western blotting technique. The rabbit and mouse monospecific antisera against rWbL2 reacted only with the recombinant protein of 23 kDa [ rWbL2 protein] and not with the vector protein (Fig. 1). 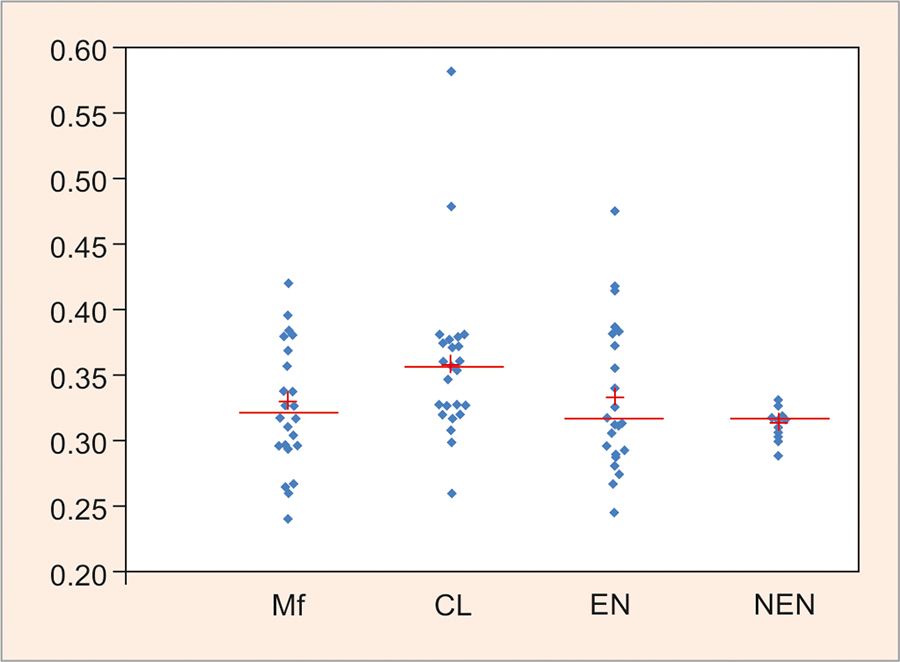 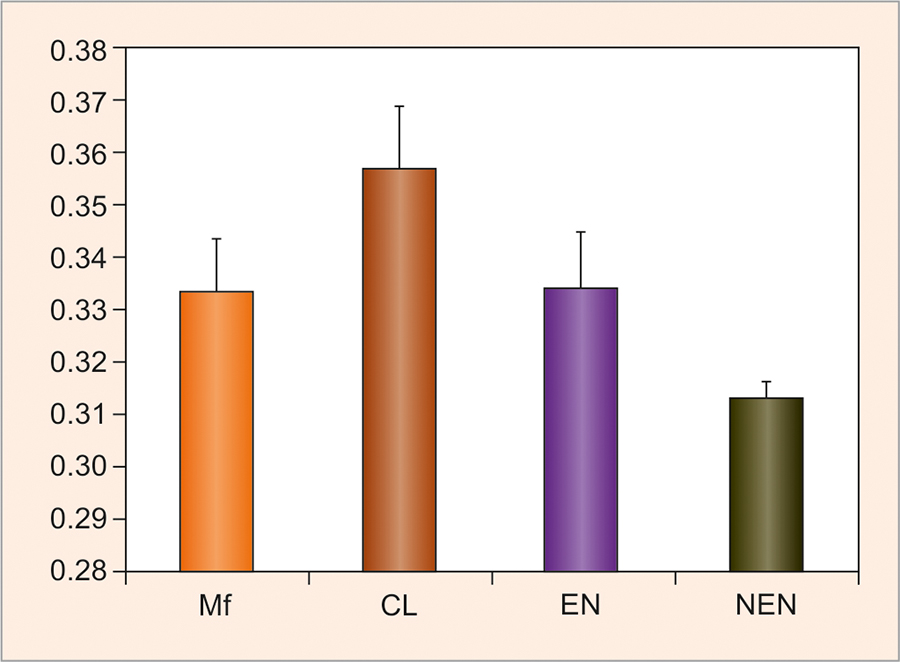 By using FSIgG as capture antibody in double antibody sandwich ELISA, the mean filarial WbL2 or its equivalent antigen levels in sera of microfilariemic and CL individuals were significantly higher than the mean filarial antigen levels in NENs (p < 0.01; Graphs 3 and 4). A total of 15 of 25 (60%) microfilariemic and 18 of 25 (72%) CL filarial sera were positive for filarial WbL2 or its equivalent antigen using FSIgG as capture antibody (Tables 1 and 3). One of the 25 endemic sera was found positive and none of the 15 NEN sera were positive. 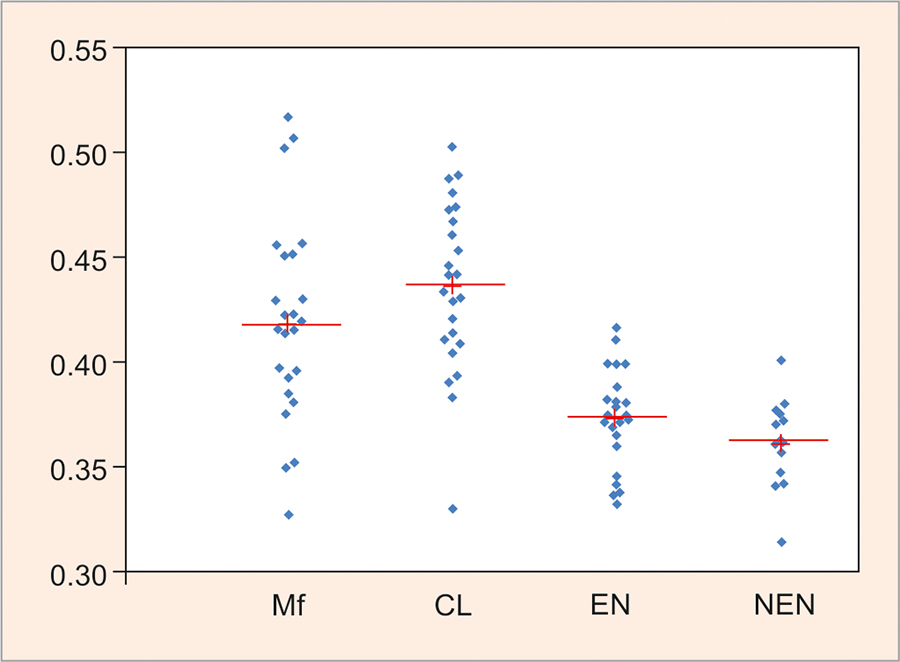 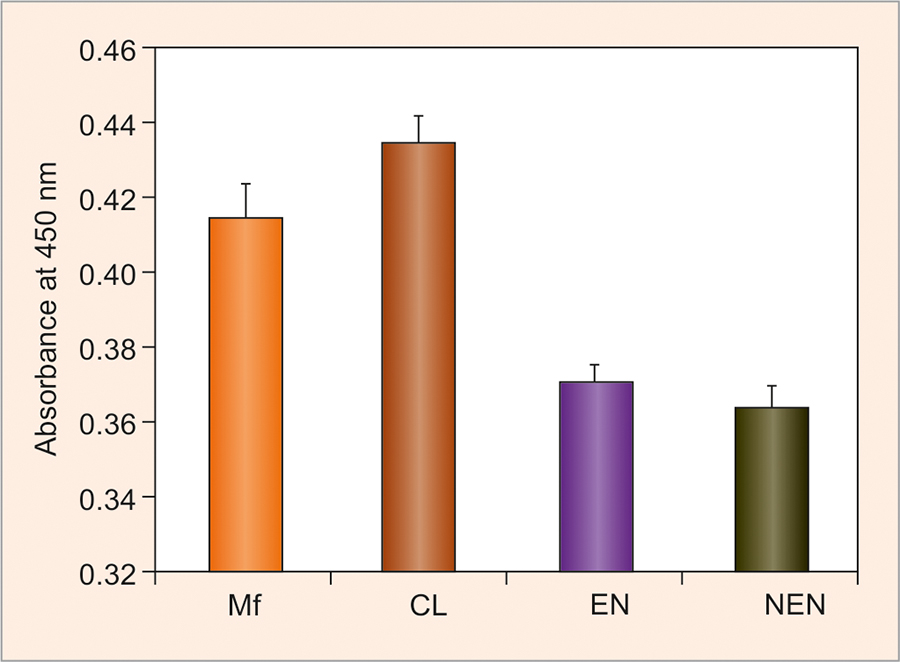 In the present study, rabbit and mouse antibodies raised against rWbL2 along with IgG of human Cl filarial serum (FSIgG) were explored in different combinations to standardize double antibody sandwich ELISA to detect circulating filarial antigen in sera of different filarial groups. The WbL2 is a W. bancrofti L3 larval protein of the SXP/RAL-2 family protein. After specific expression of this WbL2 gene in the subventral pharyngeal gland, protein secretion will occur.11 The rWbL2 antigens were expressed as hexahistidine tagged proteins with molecular weights of 23 kDa in SDS-PAGE (Fig. 1). The same was confirmed by Western blotting using anti-His antibody as probe (Fig. 2). There is a similarity of WbL2 proteins with the other proteins of SXP/RAL-2 family, such as Ancylostoma caninum (Ac-16), Ascaris suum (As14), Acanthocheilonema viteae (Av-RAL-2), Setaria digitata (Sd-SXP-1), Brugia malayi (Bm-SXP-1), and Onchocerca volvulus (Ov17 and P36991). This suggests that WbL2 may be having similar properties with these nematode-specific proteins.16 Some of the above proteins have been identified as a target vaccine candidate for protection from nematode infection upon immunization. One of the previous studies explored the antigenic properties of the SXP/RAL-2 family protein, and protective immune response elicited by these protein family against filarial and nematode infection.17

In our present study, the filarial antigen assay was standardized to detect WbL2 or equivalent antigen using FSIgG and mouse anti-WbL2 antibodies as capture antibodies. Both the antigen assays (based on FSIgG and mice anti-WbL2 antibodies) gave 100% specificity. However, using mouse antibodies, WbL2, or equivalent antigen could be detected only with 40% sensitivity (for microfilaremic cases). This assay also showed 56% of 25 CL filarial sera as positive (Table 4).

The best results for filarial antigen detection were obtained when the assay was configured to detect WbL2 or equivalent antigen using FSIgG as capture antibody. The assay detected filarial antigen with 60% sensitivity and 100% specificity (Table 4). The positive and negative predictive values were 100 and 60% respectively. Another positive aspect of this assay was that it detected 72% of CL filaria as positive, suggesting the presence of active filarial infection in these CL cases.

Immunological response studies on different CL categories of filarial patients have shown that Mf individuals have low Th1 response to filarial-specific antigens compared with CL filariasis cases and EN. Thus, more Mf individuals should be positive because of low clearance of antigen in antigen-based assay. In CL filariasis cases, there is more antigen clearance due to macrophage activation and increased Th1 response.18 Despite this fact, more CL cases tested positive for WbL2 antigens. The fact that the circulating WbL2 or equivalent filarial antigen could be detected in these CL cases and ENs even though they were negative for Mf in night blood smear suggests the presence of adult worms. This implies the presence of active infection in these cases. It is possible that some CL and EN group cases are from endemic areas, and they may be exposed to fresh infective bites of mosquitoes. In our study, the positivity for filarial antigen using the above assays varied from 4 to 36% in EN group. The EN is a very heterogeneous group in filaria-endemic areas, consisting of some which are truly negative and some with prepatent or unisexual infections.

In the present study, all the Mf cases with W. bancrofti infection were Mf positive. These assays were able to detect 40 to 60% microfilaremic individuals. Possible explanation for this low detection in Mf staged individuals could be that the level of WbL2 antigens in these samples could be very low and, hence, not detectable by this assay.

Lalitha et al26 have developed sandwich ELISA by using antibodies against recombinant antigens, BmSXP-1 and WbSXP-1, which have a detection of high proportion of Mf-positive cases with bancroftian filariasis in WbSXP-1 than BmSXP-1 assays.27

Hence, immunomonitoring along with CL examination of filarial-specific WbL2 antigen in circulation could be helpful in determining the appropriate period of DEC treatment for CL relief and cure, which are necessary for proper implementation of GPELF and to make world free of lymphatic filariasis.28

Authors would like to thank to their guide Late Prof. Maryada Venkata Rami Reddy for his motivation and continuous support for the above research study during the postgraduate period.