Evidence of knowledge of hypertensive disorders of pregnancy is found in Hippocratic writings (430—330 bc). As stated in Coan prognosis, headache accompanied by heaviness and convulsion during pregnancy should be considered as alarming symptoms.1

Overall incidence of preeclampsia is 6 to 8% of all pregnancies and 10% of first pregnancies. Approximately 50,000 women die annually from preeclampsia worldwide. It contributes to the death of a woman every 3 minutes worldwide.2 It is associated with many maternal complications, such as preterm labor; antepartum hemorrhage; postpartum hemorrhage; hemolysis, elevated liver enzyme levels, and low platelet levels syndrome; and fetal complications, such as intrauterine growth retardation (IUGR).3

The working group of the National High Blood Pressure Education Programme (NHBPEP 2000) has defined hypertensive disorders of pregnancy. Any mother who was previously normotensive and nonproteinuric and who develops elevation of blood pressure (BP) ≥140/90 mm Hg after 20 weeks of gestation (2 reading, at least 6 hours apart) and proteinuria of ≥300 mg in 24-hour urine sample or ≥1+ by dipstick method in a random urine sample is defined as preeclampsia.4

Adequate invasion of trophoblasts into uterine spiral arterioles is necessary for proper functioning of placenta. Impaired invasion leads to narrowing of uterine arterioles and placental ischemia.5 Placental ischemia becomes a causative factor for reduced expression of placental growth factor, vascular endothelial growth factor, nitric oxide, and prostacyclin from vascular endothelium. Expression of antiangiogenic factors, such as soluble Fms-like tyrosine kinase 1, interleukins (ILs), tumor necrosis factor-α (TNF-α), etc., is increased on the other side. This angiogenic imbalance causes widespread endothelial dysfunction all over the body.6,7 Increased levels of TNF-α and ILs cause alterations in the insulin signaling pathway leading to IR.8 Increased mortality and morbidity, both in mother and fetus, are associated with increased IR.9

This study was done to evaluate status of IR in preeclamptic women and compare with that of normal pregnancy.

Women were instructed for 12 hours overnight fasting. About 2 mL of venous blood was collected in a fluoride ethylenediaminetetraacetic acid vial using proper aseptic precautions. Plasma was separated by centrifugation and used for the estimation of plasma glucose and plasma insulin concentration.

Comparison of parameters among cases and controls

The IR indices that include FGIR, QUICKI, and log FI were calculated from the values of FPG and FI concentration based on the methods12 using the formulas:

Values are presented as mean ± standard deviation (SD) and the statistical analysis was done using SPSS 17.0 software. Student's unpaired t-test was used for comparison of parameters between two groups. The p-value of less than 0.05 was considered as statistically significant.

Correlation of parameters with BP among study groups

Correlation between FPG and BP 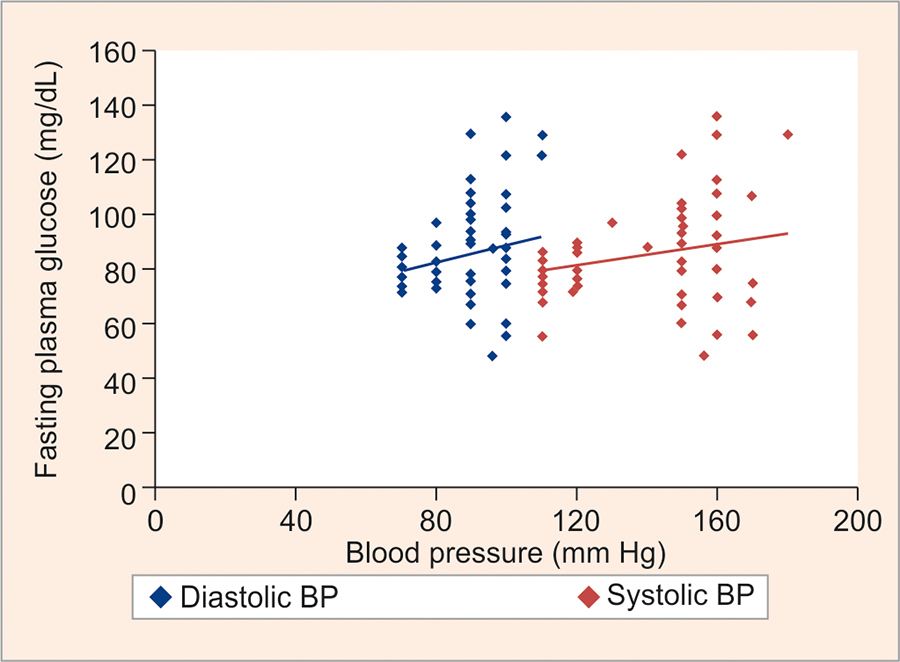 Correlation between FI and BP 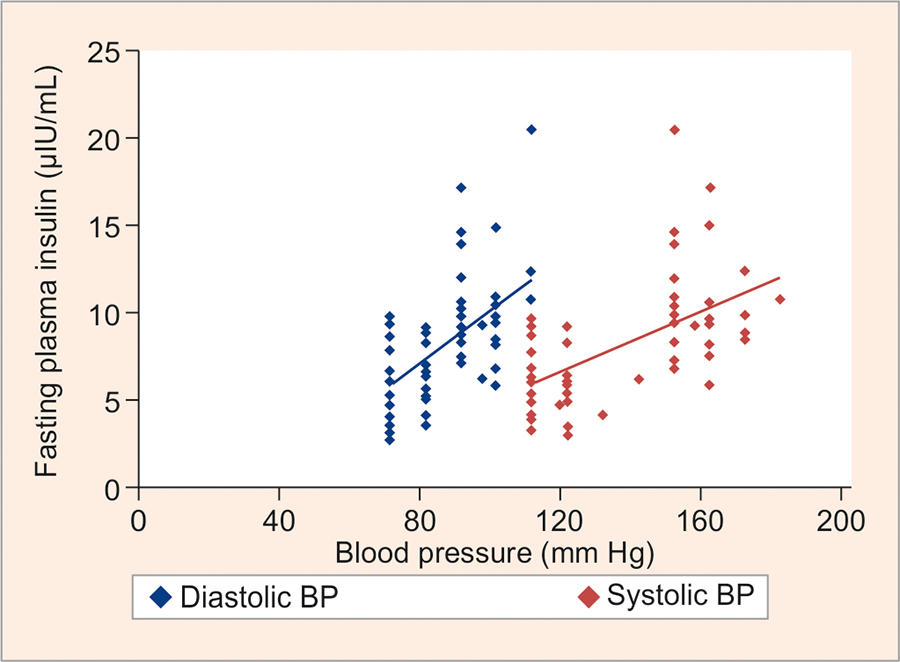 The knowledge about hypertensive disorders of pregnancy has been present since ancient times.1 Preeclampsia can affect all organ systems, most notably the renal, cardiovascular, brain, hematologic, and immunologic systems. These disorders are associated with increased mortality and morbidity both in mother and in fetus.13

This study was done to compare changes in IR in preeclampsia and in normal pregnancy. Age is one of the major factors affecting IR, and with an increase in age, there is a progressive increase in IR.14,15 Therefore, age-matched cases and controls were selected to remove the bias. The IR increases along with advancement of pregnancy;16 therefore, cases and controls were also matched for period of gestation.

In our study, FPG and FI levels were significantly higher in cases when compared with controls. The findings are in accordance with Hamasaki et al,17 Ghosh et al,18 and Stefanović et al.19 Presence of IR is quoted as the main reason for elevation of fasting glucose levels in these studies. Lei et al20 stated that mild IR is noted in normal pregnancy in the form of higher FPG level and increased insulin secretion. These metabolic changes may have occurred to meet the metabolic demands of a growing fetus. These changes are found to be exaggerated in hypertensive disorders of pregnancy.

In our study, log FI was significantly higher, while FGIR and QUICKI were significantly lower in cases when compared with controls. These findings suggest increased amount of IR in cases as compared with controls. Presence of placental ischemia and inflammation leads to increased production of inflammatory mediators.21 Elevated levels of such mediators lead to alteration in insulin signaling pathway. As a result, development of IR is observed in such individuals.8 In our study, we found that systolic and diastolic BPs have significant positive correlation with FI, while having significant negative correlation with QUICKI and FGIR. This suggests increase in IR as disease severity increases.

If women with hypertensive disorders of pregnancy are screened for presence of IR, timely lifestyle and dietary modifications can be prescribed to them. Such modifications can reduce impact of IR and may reduce occurrence of maternal and fetal complications.25,26

Endothelial dysfunction and inflammatory imbalance in preeclampsia lead to development of IR in mother. Elevated IR is associated with maternal and fetal complications. If preeclamptic mothers are timely screened for IR, lifestyle and dietary modification can be prescribed to them, which can reduce complications during pregnancy, during delivery, and in later life.

Authors would like to thank all the study subjects for being part of this study and their cooperation. The authors are also grateful to authors/editors/publishers of all those articles, journals, and books from where the literature for this article has been reviewed and discussed.