Serum creatinine assay is a widely accepted index of renal function. It is an important and reliable indicator of renal health because its biological reference intervals in the serum are relatively constant during the lifetime of an adult individual without a superimposed renal failure.

The amino acids glycine, arginine, and methionine participate in creatine biosynthesis. Glycine and arginine together form guanidoacetate. Guanidoacetate is methylated by S-adenosyl methionine (activated methionine) to creatine. Creatine, by a nonenzymatic, irreversible, and spontaneous reaction, is converted to creatinine, which is an anhydride of creatine. Approximately, 1 to 2% of muscle creatine is converted to creatinine each day.1-3 Creatinine levels are relatively constant.

In addition, creatinine is an ideal marker of glomerular filtration rate (GFR). The advantage of creatinine is that it is endogenously produced in the muscle at a constant rate and filtered freely by the glomerulus. Unlike urea, it is not reabsorbed by the renal tubule. On the contrary, it is secreted into the renal tubule. Creatinine clearance, hence, overestimates GFR. The affordability of creatinine assay is another reason; it is a widely accepted index of renal function. The GFR is low in fetal and neonatal life. It increases after birth and reaches approximately 20 mL/min/1.73 m2 at 1 month of age in term and PT neonates.4,5

The study design is a prospective study.

Hemodynamically stable neonates admitted in the neonatal intensive care unit with transient hyperbilirubinemia and mild respiratory distress were recruited into the study during May 2014 to April 2016.

Study was approved by the Institutional Ethical Committee and informed consent was obtained from the mothers of the neonates who were included in our study.

Statistical analysis was performed using the Statistical Package for the Social Sciences 17 version. Significance test was done by analysis of variance (ANOVA).

Demographic data of the subgroups Ia, IIa, and IIIa

Bidirectional movement of creatinine through placenta 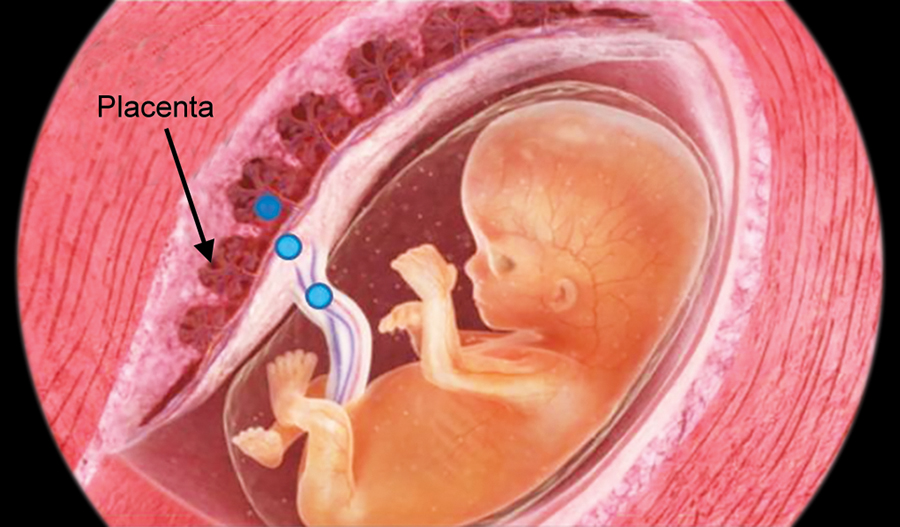 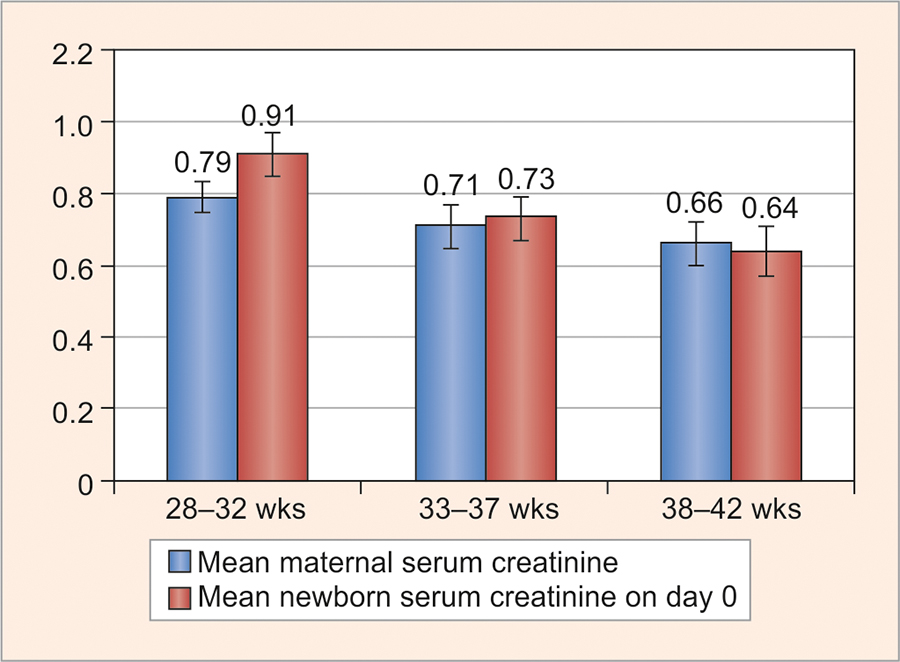 On day 3, the mean creatinine in the VPT group peaked higher when compared with day 0 (Graph 2). The PT and term groups showed a decreasing trend in creatinine from the time of birth which is statistically significant (Table 4). A higher creatinine on day 3 in the VPT plagued us, considering the fact that the fetomaternal circulation was dissociated 48 hours back and no more maternal creatinine can enter the neonatal circulation. Iacobelli et al14 also observed that serum creatinine increases in the first 48 hours in VPT neonates. Creatinine peaks significantly around the second day of life.15,16 This according to Miall et al17 is due to a poor creatinine clearance in the VPT neonates. According to Lao et al,18 Larsson et al,19 and Pitkin and Reynolds,20 fetal creatinine equilibrates with maternal creatinine in utero. After birth, neonatal serum creatinine concentration is a reflection of the infant's own rates of creatinine metabolism and excretion. The exogenous creatinine load acquired in utero from the mother, reequilibration of serum creatinine after fetomaternal dissociation, and premature kidneys incapable of effective creatinine clearance are all contributing factors for peaking of serum creatinine on the third day of extrauterine life in the VPT group. Lawrence et al demonstrated that the most premature neonates show a higher peak in plasma creatinine around day 2 and a sluggish fall in creatinine levels thereafter. 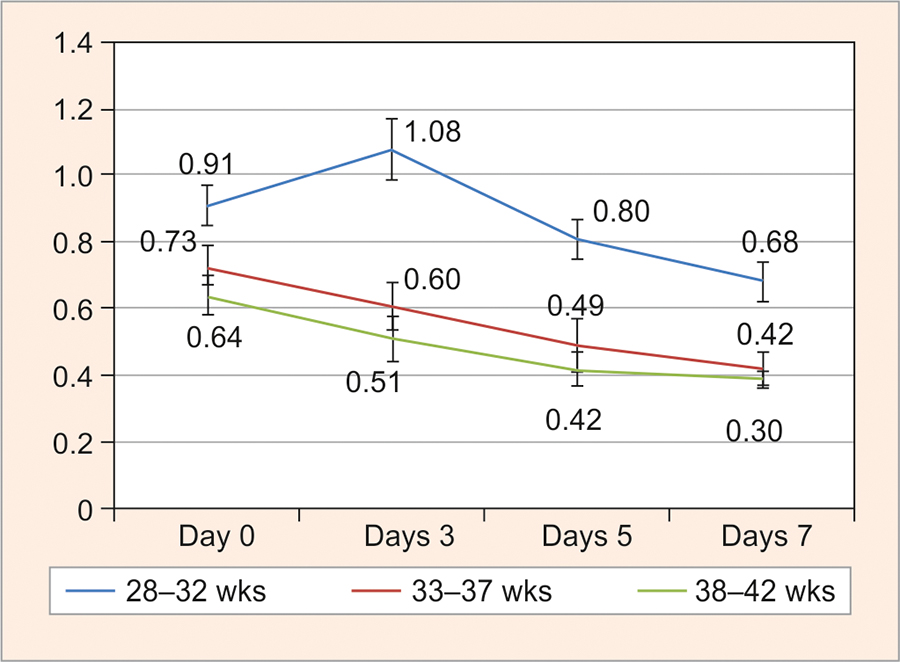 Reabsorption of creatinine into peritubular capillaries 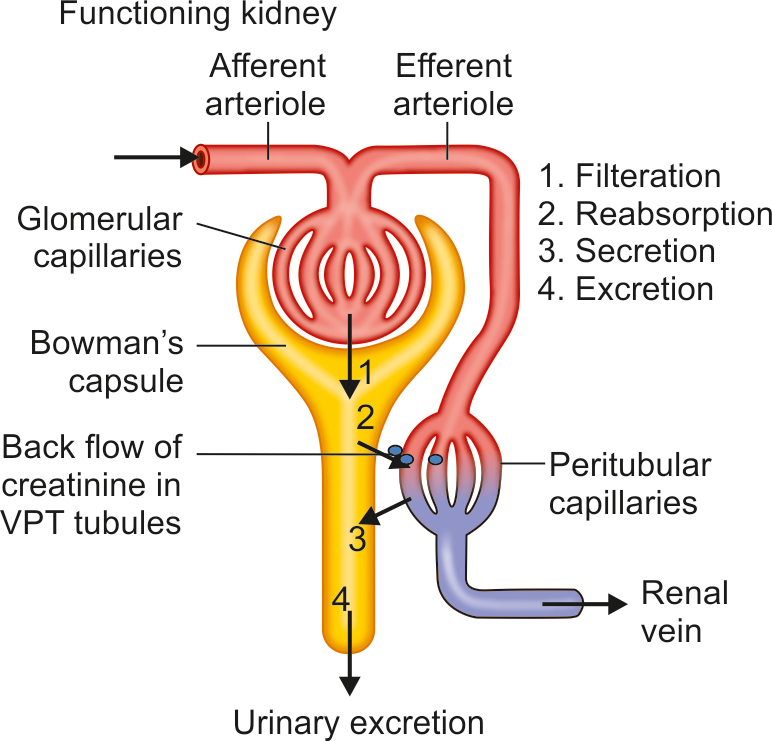 An encouraging finding was that the creatinine on day 5 in the VPT showed a significant decrease and was almost comparable with the maternal creatinine (Table 3). In the PT and term groups, the creatinine continued to decrease further. Creatinine clearance was increasing in all neonates, albeit slowly in the VPT neonates. This finding clearly indicates the process of a slow maturation in the VPT group.

Mean serum creatinine on day 7 in the VPT, PT, and term groups was significantly low when compared with day 0. All the neonates were discharged subsequently and none of them developed renal failure (Table 3). 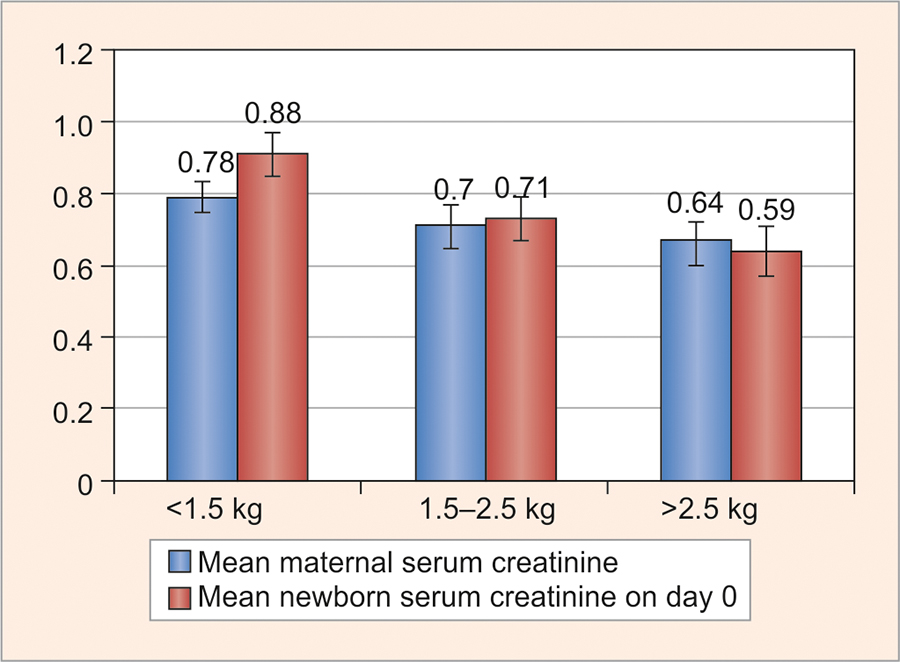 Decreasing trend in mean creatinine levels of VLBW, LBW, and NBW neonates on days 0, 3, 5, and 7 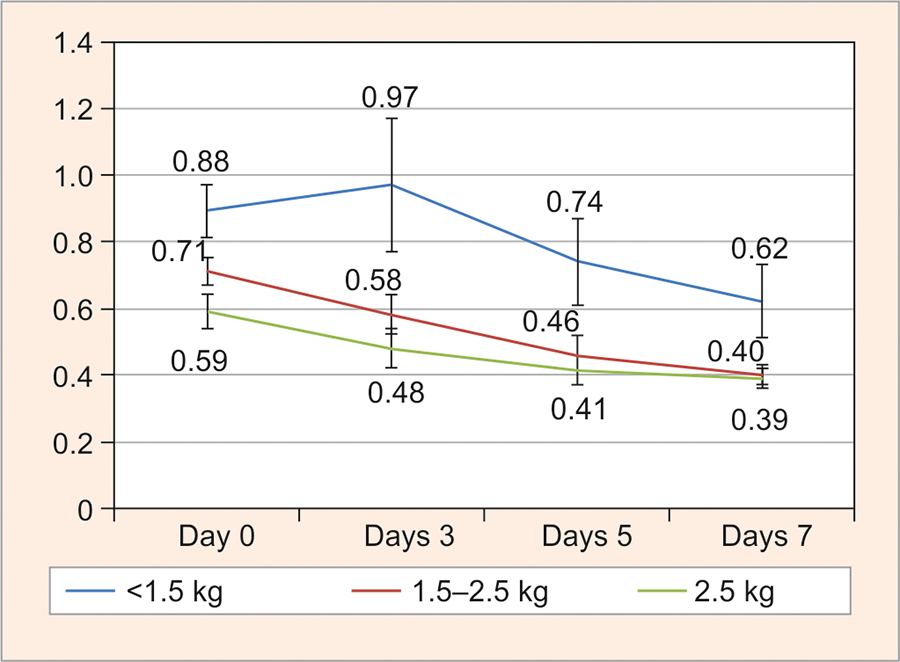 Another encouraging finding is that mean creatinine decreased on day 5 in all the groups, such as the VLBW, LBW, and NBW which is statistically significant (Table 6). A clear downward trend could be appreciated in all the groups. This clearly demonstrates the maturation of the kidney even in VLBW babies (Graph 4).

The creatinine showed a continuing downward trend in VLBW, LBW, and NBW neonates on day 7, further emphasizing the transition from premature to mature kidneys.

We observed similar findings in VPT vs VLBW, PT vs LBW, and term vs NBW neonates. The inevitable question is “Is gestational age a better indicator of maturity or birth weight?” Mean creatinine in VPT neonates is 0.91 mg/dL and mean creatinine in VLBW neonates on the same day 0 is 0.88 mg/dL. The difference can be attributed to inclusion of a few PT babies in the VLBW group. The PT neonates have a lower mean creatinine when compared with the VPT group. But, statistical analysis by regression did not show any significance.

We would like to conclude that the sharp rise in creatinine should not be the lone criteria in diagnosing renal failure in the sick VPT and VLBW neonates, who are in the rapid phase of physiological adaptation to extrauterine life. Larger cohorts are required to conclusively know whether gestational age is a better indicator of prematurity or birth weight is a better indicator.

Significance test ANOVA within the groups

Significance test ANOVA within the groups