Porphyria is a clinical condition that occurs due to a defect in heme synthesis. This condition may be genetic or acquired in nature.1 The signs and symptoms of patients suffering from porphyria usually overlap with other clinical conditions, thereby leading to misdiagnosis and inappropriate treatment in most patients. The diagnosis becomes even more challenging when a case of porphyria presents with an unusual presentation. Thus, most of the cases remain underreported due to misdiagnosis. Hence, the true prevalence of porphyria is not known. The literature search revealed that incidence of porphyria cutanea tarda is 40 new cases per 1 million people per year.2 The prevalence of acute intermittent porphyria in the general adult population ranges between 1 and 8 per lakh.3,4 An accurate and definite diagnosis of porphyria and its types can be made only when enzyme defect or mutation can be detected. However, the availability and cost of these tests is an important practical problem encountered in a country like India. In this article, we discuss a probable case of porphyria cutanea tarda/variegate porphyria based upon the clinical picture of patient. These cases can be easily confused with other skin diseases due to their presentation in the form of photosensitive lesions. Hence, we wish to propose a simpler diagnostic approach based on easily available facilities to diagnose patients with porphyria.

A 22-year-old male patient, carpenter by occupation, reported to the dermatology department with certain skin lesions on photo-exposed parts of the body. A differential diagnosis of epidermolysis bullosa dystrophica, epidermolysis bullosa acquisita, and pleomorphic light eruption was made. The patient was investigated using laboratory tests. The investigation reports did not correlate with the clinical picture. Therefore, the patient was made to undergo several further investigations. Eventually, a probability of porphyria was suspected by the dermatologist, and the patient was referred to the Department of Biochemistry for diagnostic workup for the same.

The patient was evaluated by us based upon history, clinical examination, and laboratory tests (Tables 1 and 2) he had undergone. The patient presented with chief complaints of skin lesions on face, dorsum of hands, and feet for last 6 months, which appeared and worsened on exposure to sunlight. Patient described the lesions as fluid-filled eruptions that would rupture spontaneously leaving behind sore skin and patches of pigmentation. He also has a chronic history of alcohol intake for last 10 years. He had been drinking a local variety of alcohol-containing drink (around 1 L per day). He described in his history an interesting feature that his lesions improve on abstaining from alcohol. At the time of presenting to the hospital, he had been abstaining from alcohol for the last 3 months. His lesions also improved on topical application of a sunscreen prescribed to him by the dermatologist. He does not have any history of neuropsychiatric symptoms or abdominal pain. There is no family history of such lesions as well.

Blood and urine investigations of patient

On further investigations, he described that around 3 years back, he had developed severe chest pain for which he was admitted in the emergency ward of a nearby hospital. There he had undergone some investigations like chest X-ray, electrocardiogram, and blood tests following which he was given some treatment at the hospital that had flared up a similar episode of skin lesion on his photo-exposed parts. The patient got apprehensive and discontinued the treatment within a week. The lesions had lasted for around 3 months then, and healed gradually. The patient remained asymptomatic thereafter, until the recent episode.

On physical examination, the patient revealed that lesions were of erosive and ulcerative type with erythematous base (Fig. 1A). Size of lesions ranged from 2 mm to 3 cm. The lesions were found to be present on face and dorsum of hands (Figs 1A and B respectively). The skin also showed patches of postinflammatory hypo- and hyperpigmented areas (Fig. 1B). The healed lesions were characterized by crusting and scarring (Fig. 1B). Systemic clinical examination revealed no abnormality.

The history and clinical examination is, thus, suggestive of a sporadic case of acquired porphyria with alcohol and drugs being the precipitating factors.1 However, the past episode suggestive of constrictive pericarditis, an uncommon presentation of porphyria cutanea tarda cannot be ascertained due to nonavailability of previous medical records.5 Thus, from the above discussion, it is evident that a suspected case of porphyria is usually and unnecessarily subjected to a wide number of tests (Tables 1 and 2), which could be financially burdening to the patient and, in most instances, porphyria still remains the diagnosis by exclusion.

Skin lesions in a case of porphyria: (A) Blisters and erosions on face; and (B) skin lesions on dorsa of hands

From literature it is known that suspected cases of porphyria can undergo a basic screening test called Ehrlich's test as discussed here. The method to carry out Ehrlich's tests is described in Varley's Practical Clinical Biochemistry.6 Development of rose pink color in aqueous layer is indicative of presence of porphobilinogen (PBG). However, development of rose pink color in the chloroform layer occurs due to urobilinogen also, but is seen only when the amount of urobilinogen in the urine sample is very high as seen in hemolytic anemias. In our study, patient's urine sample tested positive for Ehrlich's test (aqueous layer turned rose pink, thereby, indicating presence of PBG) giving a clue that the patient could be a case of porphyria. But, this test has its own disadvantages. A negative Ehrlich's test does not rule out the possibility of porphyria totally. Ehrlich's test is answered positive in a case of porphyria only when the concentration of PBG exceeds 10 to 20 times more than the normal.7 Moreover, Ehrlich's test requires certain reagents for the urine testing like Ehrlich's reagent (containing p-amino benzaldehyde), saturated solution of sodium acetate, chloroform, and freshly voided urine samples of the suspected patient and healthy control. Secondly, these reagents have to be prepared fresh. It being a manual method, takes comparatively longer time to process the samples. Though the possibility and feasibility of carrying out Ehrlich's test may be present in medical colleges where reagents may be available from an academic point of view, most of the diagnostic centers do not have these reagents to carry out the test.

Another method to screen a case of porphyria can be by using Watson—Schwartz method. This method is being followed in the United States, but it has a major limitation of poor sensitivity.8 Hoesch test is also recommended for screening cases of porphyria in some countries. However, this test shows false-positive results. Before the diagnosis of "inducible" porphyria is made, a positive Hoesch test requires that indoles, indoleacetic acid, methyldopa, end-stage alcoholic malnutrition, and phenazopyridine HCl be excluded, to avoid misinterpretation.9 Both Watson—Schwartz method and Hoesch tests are thus considered complicated methods to test for PBGs.9

Considering the drawbacks of these available methods, there is a need to have a simpler diagnostic approach for working up cases of porphyria, especially in stand-alone laboratories. Hence, it prompted us to carry out this study to find out alternate methods for diagnosing patients of porphyria.

This work was carried out in the Department of Biochemistry Guru Teg Bahadur Hospital and University College of Medical Sciences, Delhi after taking written informed consent from the patient. Porphyrinogens have the property to absorb 400 to 410 nm wavelength and emit out 619, 626, or 634 nm wavelengths.10 This property has been exploited by us to discover two methods, namely UV absorption spectral scan analysis and fluorescence emission spectral scan analysis. The procedure to carry out these tests and the interpretation of the results so generated are being described here.

An instrument called multimode microplate reader (based upon the principle of spectrophotometer) and a microtiter plate are required to perform these tests. The samples to be analyzed (200 μL was taken) were filled in the wells of the microtiter plate, and readings for absorbance and fluorescence emissions were recorded in the multimode microplate reader (synergy H1 hybrid multimode reader by Biotek company, USA) at a series of wavelengths with an increment of 1 nm (spectral scan). A transparent microtiter plate (by Tarson, USA) for measuring absorbance and a black microtiter (by Tarson, USA) plate for measuring fluorescence emission were used.

The absorption scan was carried out at a series of wavelengths (ranging from 350 to 500 nm) in the multimode microplate reader for urine and serum samples of the patient as well as normal individual (which served as control) and the graphs were recorded. Distilled water served as blank. The above experiment was repeated after acidifying the patient's urine sample and normal urine sample by using 5% hydrochloric acid (1:1 v/v ratio of urine and 5% HCl was used) and graph was recorded.

Patient's urine sample, normal individual's urine sample (control), and distilled water (blank) were excited at 410 nm and emission values at 619, 626, and 634 nm were recorded. From literature, it is known that porphyrinogens emit these wavelengths upon excitation with 410 nm.10 The urine samples of patient and control were further analyzed for spectral scan of the fluorescence emission at a series of wavelengths (ranging from 450 to 700 nm), and the findings were recorded as graph. The fluorescence emission scan experiment was repeated again by using the serum samples of the patient and two normal subjects (serving as controls) this time, and the findings were recorded as graph.

Graphs 1A to C 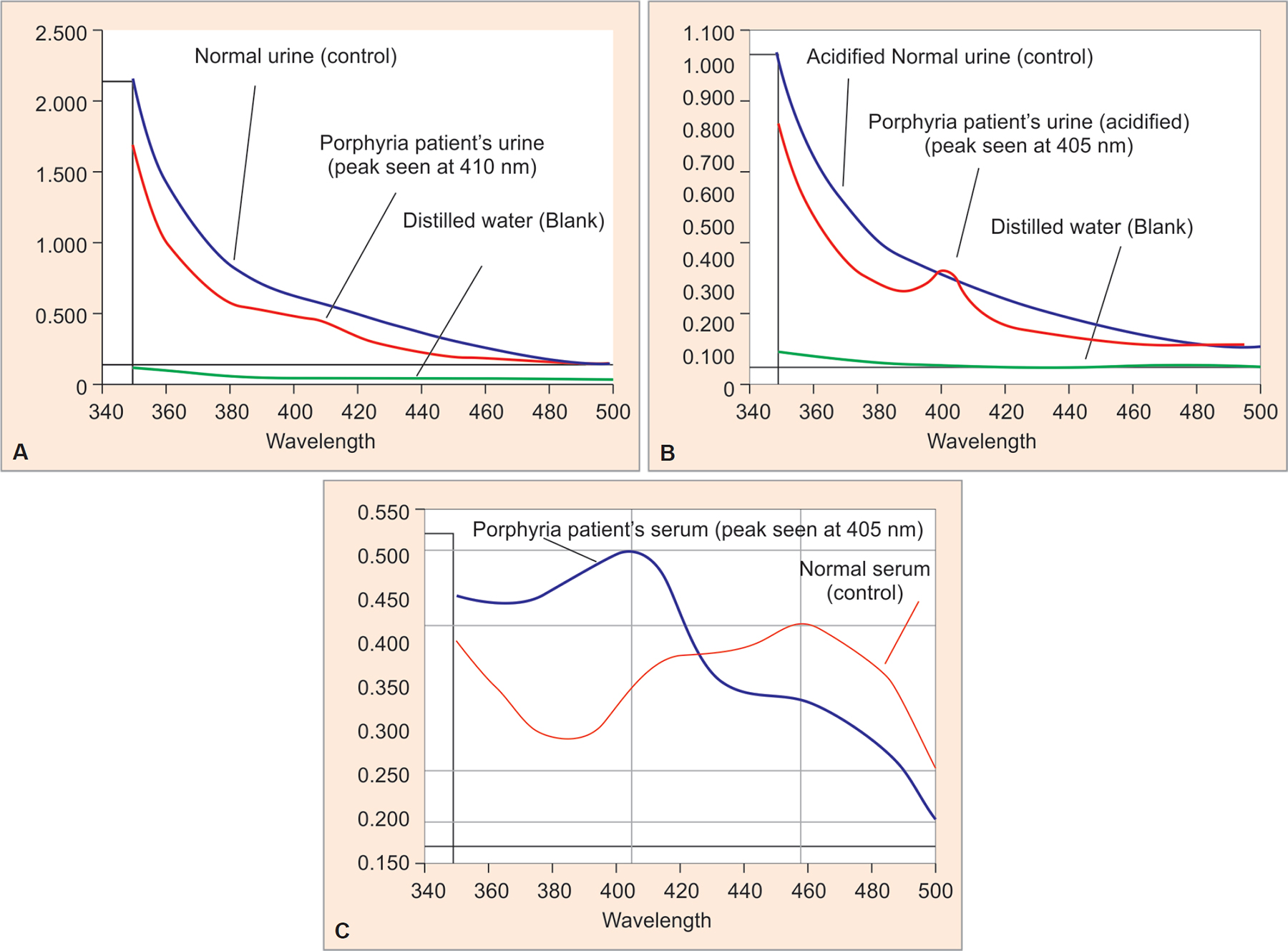 Graphs 2A and B

By using UV absorption and fluorescence emission spectrum studies, though we can promptly diagnose cases of porphyria, if it is further desired to know the type of porphyria the patient has, then an algorithm formulated by us (Flow Chart 1) based on clinical features and basic lab tests can be used. Differential diagnoses for porphyria cutanea tarda/variegate porphyria include other blistering disorders, such as polymorphic light eruptions, bullous lupus erythematosus, epidermolysis bullosa acquisita, photo-induced bullous drug reactions, and solar urticaria. All of these conditions have normal (i.e., negative) urine, fecal, and serum porphyrin levels.11 These dermatological conditions can be worked up accordingly if UV absorption and fluorescence emission spectrum studies are found to be negative.

A limitation of our study is that porphyria being a rare genetic disease, we could not enroll more patients in our research.

We have described a case of porphyria in our article whose prevalence is very rare. This case is probably of the acquired type, who has developed porphyria secondary to chronic alcohol intake (ethanol, a porphyria causing agent). We have also found that UV absorption spectral scan and fluorescence emission spectral scan have the potential to be developed as diagnostic tests in future, considering the practicality and affordability of these tests vs the gold standard studies to detect genetic mutations and enzymatic assays in porphyria patients.

Algorithm to aid in identifying type of porphyria based on clinical symptoms and lab tests. *ALA synthase and ALA dehydratase deficiency do not show emission peak; **Enzymatic assays or molecular diagnostics will be confirmatory for diagnosis; ***UV: Ultraviolet; USG: Ultrasonography; ALA: Aminolevulinic acid 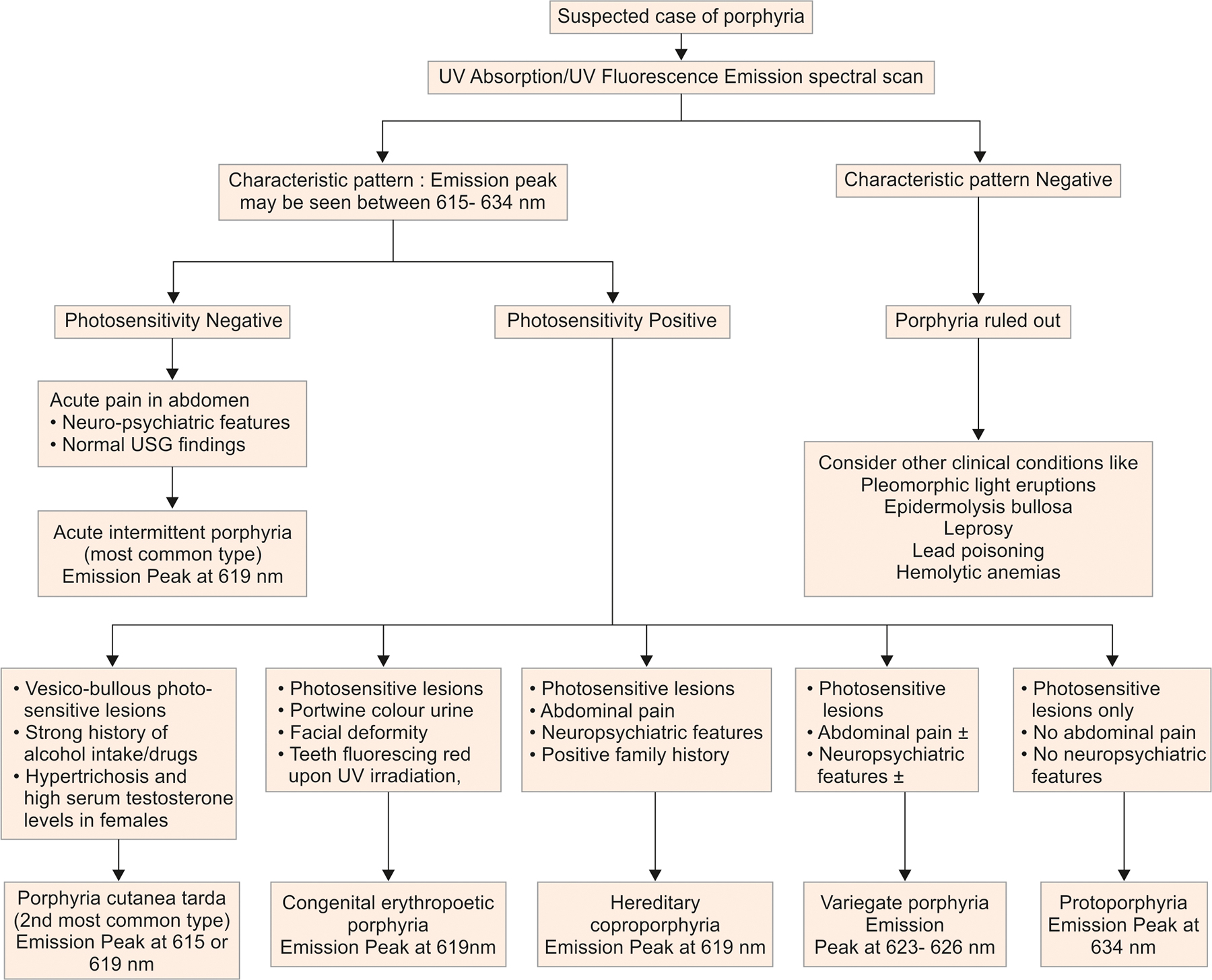 Authors would like to thank their patients for participating in the research work.