The use of low-calorific/noncalorific/AS as substitutes for sugar has increased markedly in the past decades, reflecting widespread attempts to reduce energy consumption and combat the rising prevalence of obesity.1 These sweeteners are 30 to 13,000 times sweeter than table sugar. These sugar substitutes are used in a variety of food substances labeled as “diet” or “sugar free” including candy, chewing gum, ice cream, soft drinks, jellies, yogurt, fruit juice, and baked goods. They are also present in some pharmaceutical products, which include cough drops, cough syrups, certain medications, and vitamins.2 Health awareness and adopting “healthier” diets in the quest to quell metabolic disorders and diseases are increasing.3 People who are overweight/obese or diabetics consume these substances to control their dietary intake of table sugar and body weight.2 However, several common AS, e.g., aspartame, sucralose, and saccharin, have been the subjects of enduring controversy due to observational and laboratory studies indicating an association of AS consumption with increased appetite, food intake, weight gain, and glucose intolerance.1,4-6 It is still debatable whether increased AS or nonnutritive sweetener (NNS) consumption has any adverse effects on obesity and diabetes management.2,7-9

Sucralose is an intensely sweet compound that has a sweetening potency approximately 600 times that of sucrose. Unlike sugar, the glycosidic linkage of this substituted disaccharide is apparently unavailable to the enzymes that cleave it. Ingested sucralose is neither metabolized to its monosaccharide-like moieties nor is it a source of energy. Therefore, it is not digested and about 15 to 20% is absorbed as such and completely excreted within 72 hours in urine. Its acceptable daily intake (ADI) is 0 to 15 mg/kg/d.10 Sucralose undergoes thermal decomposition above 119°C and forms chloropropanols with glycerol, which are carcinogenic.11 However, it is used in beverages and other foods, including those undergoing heat treatments, such as baked goods. Data from some studies, conducted in human subjects with and without diabetes, found that even extremely high doses of sucralose (many times above the ADI) did not have adverse effects.12-19 However, some other studies found weight gain and metabolic disturbances.4,5,20-22

Suez et al23 have shown that consumption of AS can lead to glucose intolerance. Pepino et al24 in a review have shown that, in obese individuals, sucralose affects the glycemic response to an oral glucose load and increases both peak plasma glucose concentration and insulin secretion in response to glucose stimulation. Alonso Romo-Romo et al,25 in a systematic review, have observed that obesity could be a possible confounding factor for the associations found in some of the observational studies bwtween NNS consumption and the development of metabolic diseases. They also suggested that further studies are required to probe the effect of AS on carbohydrate metabolism.

Therefore, we wanted to study the effect of sucralose on glucose uptake in muscle cells. We selected rat L6 cells as this cell line has shown to be most sensitive to insulin.

To study the effect of sucralose on glucose uptake in L6 cell line.

The L6 cells from the ATCC were grown in DMEM with 4 mM L-glutamine adjusted to contain 1.5 g/L sodium bicarbonate, 1 g/L glucose, and 1 mM sodium pyruvate (Gibco) with 10% fetal bovine serum (FBS) in an incubator at 37°C with 5% CO2. Medium was changed every 2 to 3 days. Once the myoblasts were grown to confluence in a 24-well plate, the media were replaced with DMEM containing 2% FBS to induce differentiation into myotubes. Full differentiation took about 7 to 8 days. A day prior to experiment, half of the plates (12 wells) were incubated with 0, 1 nM, 1 μM, or 1 mM of sucralose alone and another half with the increasing concentration of sucralose and 10 nM insulin for 24 hours. After this incubation, glucose uptake was studied.

All experiments were done in triplicate. After 24-hour incubation with AS, L6 myotubes were incubated with deoxyglucose in no-glucose DMEM media for 10 minutes. After 10 minutes, 0.1 μCi/mL 2-deoxy[3H] glucose (PerkinElmer Life Sciences) was added alone for basal and with 10 nM insulin for stimulated glucose uptake. 10 minutes later, L6 myotubes were placed on ice, washed with ice-cold phosphate buffered saline, and lysed in 0.1% sodium dodecyl sulfate. It was then transferred to vials with scintillation cocktail for counting and an aliquot taken for protein estimation by Bicinchoninic acid method (ThermoFisher Pierce). Uptake of 2-deoxyglucose was then quantified by liquid scintillation counter and expressed per mg of protein.

Table 1 depicts two-way ANOVA that showed a significant difference (p 0.0137) for the interaction between sweetener and insulin and (p < 0.0001) for the effect of different concentrations of sucralose on glucose uptake.

Glucose uptake vs AS concentration in basal and stimulated (insulin) conditions 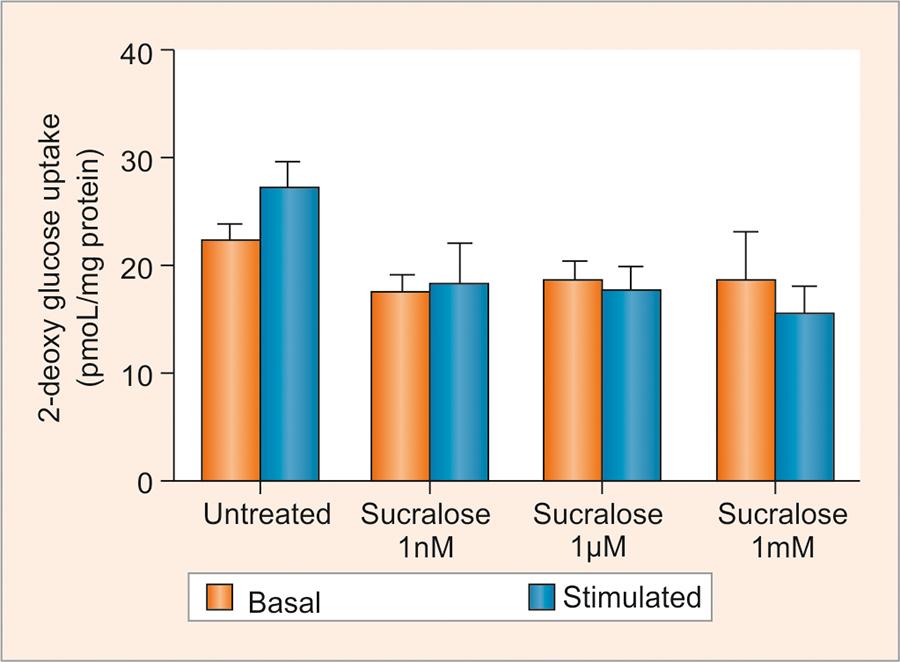 The AS act through a sweet-taste receptor, which is a transmembrane protein present in the cell membrane, i.e., coupled to a G-protein. It is a dimer of T1R2 and T1R3 proteins. It is present in tongue and other nongustatory sites like intestine, brain, adipocytes, muscle, etc. Binding of a sweet compound to the receptor causes dissociation of α-gustducin from the receptor and activates phospholipase C-β2. Elevation of cytoplasmic calcium concentration [Ca2+]i and subsequent activation of sodium-permeable TRPM5 channel are critical to sweet sensation. Stimulation of the T1R2/T1R3 taste receptor activates peripheral gustatory nerves and, in turn, brain gustatory pathways. Sweet-tasting compounds, such as sugars and low-energy sweeteners, can bind to and stimulate the sweet-taste receptor.26 Nakagawa et al27 have studied the mechanism of action of four different AS including sucralose in MIN6 cells. They have found that all the four AS evoke different cellular responses and were inhibited by different substances. Sucralose induced elevation of [Ca2+]i and [cAMP]i and was inhibited by gurmarin, an antagonist of the sweet-taste receptor. Masubuchi et al28 have shown that the sweet-taste receptor in 3T3 L1 cells was distinct from the one seen in tongue and may activate a different signaling pathway. Simon et al29 have shown that these AS can act even in T1R2/T1R3 knockdown cells. This implies that they could be acting through other receptors that have not yet been identified.

In our study, we observed that sucralose decreased glucose uptake in insulin-stimulated condition across all the concentrations studied. This suppression of uptake increased with increase in concentration of sucralose as shown in Graph 1. This is in accordance with Suez et al23 and Pepino et al24 who suggest that AS could cause insulin resistance in human subjects. Pepino et al24 found that ingestion of sucralose affects the glycemic response to an oral glucose load and increases both peak plasma glucose concentration and glucose-stimulated insulin secretion in subjects with obesity. Sucralose also tended to increase plasma glucose-dependent insulinotropic peptide concentration, and could promote insulin resistance. Approximately 20% higher than normal concentrations of insulin were required to maintain same glycemia when obese subjects consumed sucralose than when they consumed water before glucose ingestion. Sucralose has been shown to increase glucose-stimulated insulin secretion in mouse insulinoma—MIN6 cell line and mouse and rat islet cells.30,31 It also increased secretion of glucagon-like polypeptide-1 in human L cell line NCI-H716.30

There are several studies on the effect of sucralose and other AS in various other cell lines. But we found studies with effect of other AS on glucose uptake. In a study done by Simon et al,29 saccharin AS increased adipogenesis and glucose uptake in 3T3L1 adipocytes, but sucralose caused mild inhibition of adipogenesis. They studied 0.45 and 4.5 mM saccharin concentrations, which are greater than the expected physiological concentration (approximately 75 μM), and these concentrations are much higher than what we have used in our study. Bhasker et al32 reported increased glucose uptake with naturally occurring AS in diabetes-induced L6 cells. These differences could be attributed to the difference in cell type (3T3L1 and diabetes-induced L6) and/or the type of AS and/or mode of action through different receptors. Therefore, further studies are required to elucidate the receptor and signaling pathways for sucralose.

From our study, we have seen a decrease in insulin-stimulated glucose uptake with sucralose. Increase in concentration of sucralose decreased the uptake further. Hence, it may not be beneficial to use sucralose in certain groups of people who have insulin resistance or are prone to it.

Authors would like to thank Prof Matthew Watt for support, encouragement, and infrastructure to carry out the work in his Biology of Lipid Metabolism laboratory, Department of Physiology, Monash University, Melbourne.