Introduction: Polycystic ovary syndrome or PCOS is also called “Stein-Leventhal Syndrome”. It comprises of many endocrinal disturbances of female reproductive system and manifested variably to be called as a “Syndrome.” Insulin resistance is seen in 30–40% women with PCOS and is accompanied with hyperinsulinemia in about 50–70% of women. Cardiometabolic index (CMI) is a new marker for coronary artery disease and metabolic syndrome. The relationship of CMI and insulin resistance is further explored in the present study using peroxisome proliferator activated receptor-γ (PPAR-γ) serum levels. PPAR-γ or glitazone receptors are involved in improving insulin sensitization, mainly through adipocyte differentiation.

Aims and objectives: To study whether there is any association of CMI and insulin resistance with PPAR-γ serum levels.

Results and conclusion: Serum triglyceride levels were found to be significantly higher in cases (121.08 ± 57.6 mg/dL) when compared to controls (97.6 ± 44.2 mg/dL), suggesting that dyslipidemia is associated with PCOS, with hypertriglyceridemia being an important component of it. This study showed significantly lower levels of PPAR-γ in the cases when compared to controls (p value < 0.05). HOMA-IR showed a significant positive correlation with serum TG. CMI also depicted significant and positive correlations with hypertriglyceridemia, HOMA-IR, and PPAR-γ.

Polycystic ovary syndrome (PCOS) was first described by “Stein and Leventhal” in 1935.1,2 It is called a “Syndrome” since PCOS encompasses many signs and symptoms clubbed together in a single entity. Although the most accepted documented prevalence of PCOS is found to be about 5–10% in women of childbearing age group, a common consensus in this regard is still lacking.3 This could be possibly because of the considerable heterogeneity in the presentation of its signs and symptoms, lack of agreement over the diagnostic criteria used to define this condition, and last but not the least due to logistic difficulties in diagnosing PCOS.4

PCOS is regarded as a multifaceted disorder. No single diagnostic criterion is enough for clinical diagnosis of PCOS. Thus, different criteria have been proposed for PCOS diagnosis, namely, Modified Rotterdam’s criteria (most widely accepted), NIH Criteria, AES Criteria, and so on. Out of the various clinical features of PCOS, most seen include hyperandrogenism, hyperinsulinemia, insulin resistance, menstrual irregularities, and radiologically visible features such as polycystic ovaries (≥12 follicles measuring 2–9 mm in diameter).5–8

Peroxisome proliferator activated receptors (PPARs) are a group of nuclear receptor proteins, which act as transcription factors regulating gene expression.9 These are so called because these were first identified in studies examining cholesterol-lowering effects of fibrates in peroxisomes.10 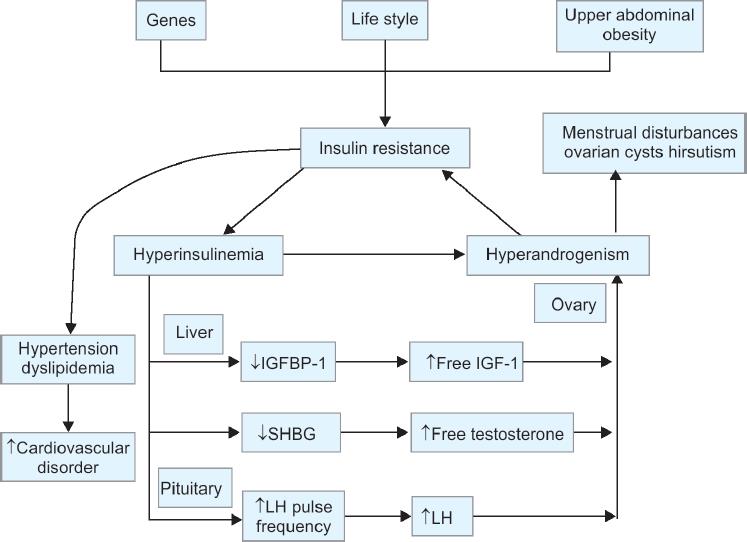 Among the various subtypes of PPARs (PPAR-α, PPAR-β/δ, and PPAR-γ), the most widely studied in relation to PCOS is PPAR-γ. PPAR-γ is further subdivided into PPAR-γ1, PPAR-γ2, and PPAR-γ3.13 The present study mainly concentrates around PPAR-γ2 subtype, which is the main subtype of PPAR-γ present in adipose tissues.14 In the present study, serum levels of PPAR-γ were estimated and further correlated with insulin resistance and a relatively new parameter cardiometabolic index (CMI).

PPAR-γ, also known by the name of “Glitazone or Thiazolidinedione Receptors,” is involved in the treatment of type 2 diabetes mellitus by their insulin-sensitizing effects.15,16 Moreover, their role in PCOS management is also related to their insulin-reducing effects in such subjects. In the present study, the insulin resistance was measured through HOMA-IR.

The CMI is a relatively newer parameter that encompasses the deranged lipid profile TG and HDL with anthropometric parameters of height and weight.17 It reflects the biochemical derangements associated with PCOS much more efficiently than these parameters show individually.

A hospital-based observational case–control study was conducted in the Department of Biochemistry in collaboration with the Department of Obstetrics and Gynaecology, Lady Hardinge Medical College and associated Smt. Sucheta Kriplani Hospital, New Delhi. The study subjects included 50 diagnosed cases of PCOS meeting the inclusion criteria and 50 apparently healthy women volunteers as controls in the age-group of 15–45 years after taking bilingual written informed consent and approval from institutional ethical committee.

(As per Rotterdam revised criteria May 2003):

For both cases and controls

Bilingual written informed consent was obtained from the study subjects. Detailed history and clinical examination of the study subjects was done. Subsequently, anthropometric measurements were recorded which included height, weight, BMI, and waist–hip ratio (WHR). After that, 5 mL of fasting venous blood samples was collected from the subjects on day 2–5 of their menstrual cycle in red-, gray-, and violet-capped vacutainers for further biochemical analysis in serum and plasma, respectively. The blood samples in the plain vials were kept at room temperature for at least half an hour to clot. It was then centrifuged at 3,000g for 10 minutes. Fresh serum was used for routine investigations and serum insulin estimation, and rest of the serum was stored at −20°C for further analysis of PPAR-γ levels by standard sandwich ELISA. Plasma was separated from whole blood collected in gray-capped vials, and fasting glucose was estimated on the same day. Fasting plasma glucose and lipid profile were estimated using Clinical Chemistry Autoanalyser, Beckman Coulter AU-680 through standard reagents/kits from Randox and Beckman.

Under the special Investigations;, HbA1c, PPAR-γ, and HOMA-IR (homeostatic model assessment-insulin resistance) were estimated. HOMA-IR was calculated using the formula:

HbA1c was determined from the whole blood in violet-capped vacutainer (EDTA) using reagents from Randox by Immunoturbidimetric Method (Latex Agglutination Inhibition), and the samples were run on Clinical Chemistry Autoanalyser—Beckman Coulter AU-680.

* p value < 0.05 is considered significant Statistically significant difference is seen in the triglyceride levels between cases and controls

** Data represented as median (Interquartile range) for non-parametric data No statistically significant difference is seen in the glycemic indicators between cases and controls Statistical test used was Mann–Whitney U test (for non-parametric data). Statistically significant difference was seen in the PPAR-γ levels between cases and controls

The present study was conducted taking a total of 100 subjects, 50 PCOS cases and 50 controls in the age group of 15–45 years. In order to carry out the study, anthropometric parameters along with several biochemical tests were performed with their correlations. There was statistically significant difference observed between cases and controls with respect to weight, BMI, WC, and WHR (Table 1). Among the biochemical tests, serum TG and PPAR-γ levels were found to be significantly different between cases and controls (Table 2). Also, it was seen that serum PPAR-γ was positively and significantly correlated with serum TG levels. (Table 3). Since insulin resistance (IR) forms a very important component of PCOS, HOMA-IR was also calculated, and it was found to be positively correlated with serum TG levels (Table 4). In the present study, a relatively newer parameter, that is CMI, was also deduced from the various test parameters in order to find out a relationship (if any) with CMI sand PCOS in view of its associated cardiovascular diseases’ risk. Interestingly, it was seen that serum TG, HOMA-IR, and PPAR-γ were showing highly significant and positive correlation with CMI (Table 5).

The present study was conducted in Department of Biochemistry in collaboration with the Department of Obstetrics and Gynaecology, Lady Hardinge Medical College and associated Smt. Sucheta Kriplani Hospital, New Delhi, after obtaining institutional ethical clearance and bilingual informed and written consent from 50 diagnosed patients with PCOS according to Rotterdam’s Criteria as cases along with 50 apparently healthy women volunteers as controls.

PCOS or “Stein-Leventhal Syndrome” is associated with multifactorial risk factors. Although PCOS has got quite variable presentation among different populations, some of its clinical features are common and overlap even in different ethnic subgroups. Based on these, PCOS is classified according to many criteria. The most used of these is modified Rotterdam’s criteria concentrating around two out of the three of oligomenorrhea; hyperandrogenic features like hirsutism, alopecia, etc.; and polycystic ovaries.7

Out of the various orally effective management modalities of PCOS, Thiazolidinedione group of drugs or “Glitazones” constitute one of the treatment options. These drugs act through PPAR-γ or Glitazone receptors and are distributed all around the body tissues. The present study mainly focused on PPAR-γ2 subtype of these nuclear transcriptional receptors and their role in the etiopathogenesis of PCOS. Their main mechanism of action is via reducing insulin resistance in PCOS cases.18–21

In the present study, all the subjects were age matched. The difference between weight, BMI, waist circumference, and waist-to-hip ratio among the cases and controls were found to be statistically significant with their p values <0.05 (Table 1). This finding is supported with results from several studies such as Papalou et al.22 who reported significantly higher BMI (27.89 ± 7.73 kg/m2) in cases compared to controls (22.34 ± 2.34 kg/m2). A study by Bahcecı et al.23 in Turkey reported that patients with PCOS have significantly higher waist circumference compared to their healthy counterparts. Legro et al.24 also found waist to hip ratio significantly higher in PCOS women, with a mean value of (0.84 ± 0.08) in cases and (0.78 ± 0.05) in controls.

Further, serum triglyceride levels were found to be significantly higher in cases (121.08 ± 57.6 mg/dL) than controls (97.6 ± 44.2 mg/dL) (Table 2). These findings are in concordance with the study done on Korean women with PCOS which suggested TG to be a useful marker of insulin resistance.25 Similarly, Tai et al.26 showed a significant difference in triglyceride levels in Asian subjects with a mean difference of (1.3 ± 0.70 mmol/L). These findings suggest that dyslipidemia is associated with PCOS, with hypertriglyceridemia being an important component of it.

Among the glycemic parameters, none was found to have statistically significant difference between cases and controls (Table 2).

This study also reported significantly lower levels of PPAR-γ in the cases when compared to controls (p value < 0.05) (Table 2). PCOS is known to be associated with insulin resistance. The lower levels of PPAR-γ in cases are supportive of the fact that insulin sensitivity is related to more PPAR-γ expression.27 A significant positive correlation was found between the serum levels of PPAR-γ and triglycerides in PCOS cases (p value < 0.05) (r = 0.295) (Table 3). Similar correlation was also reported by Semple et al.28 who proposed that PPAR-γ modifies triglyceride synthesis by FFA esterification via acyl CoA synthase. It was also observed in the present study that HOMA-IR was significantly and positively correlated with the TG (Table 4).

The present study also included CMI as a relatively newer biochemical parameter of cardiovascular and metabolic diseases that may be associated with PCOS. CMI is an index related to adiposity and hence associated with the risk of diabetes. As with diabetes, derangement in lipid profile is seen in many cases of PCOS as well.29 Moreover, according to some studies, hyperandrogenism associated with PCOS is a risk factor for cardiovascular diseases, hypertriglyceridemia, and insulin resistance.30–34 CMI can be of great help in evaluating such a condition. Hence, relationship of PCOS and CMI can be studied further. It was interesting to observe that CMI showed highly significant and positive correlation with TG, HOMA-IR, and PPAR-γ serum levels in women with PCOS (Table 5). As there are very few studies on serum levels of PPAR-γ in PCOS women, this study adds to the evidence regarding the association between PCOS and PPAR-γ levels.

The present study showed many significant differences with respect to anthropometric and biochemical parameters in PCOS cases when compared to their respective age-matched healthy Controls. Statistically significant difference was seen in weight, BMI, waist circumference, waist-to-hip ratio, TG, and PPAR-γ between cases and controls. It was also observed that there was significant and positive correlation in PCOS cases with respect to HOMA-IR and TG. When talking about CMI, it was observed that CMI had significant and positive correlation with TG, HOMA-IR, and PPAR-γ serum levels.

15. Molavi B, Rassouli N, Bagwe S, et al. A review of thiazolidinediones and metformin in the treatment of type 2 diabetes with focus on cardiovascular complications. Vasc Health Risk Manag 2007;3(6):967–973.