Aim and objective: The study objective was to analyze the association between BMI and thyroid function in adolescent girls.

Results: The median values of age, weight, and TSH levels were significantly higher in group II participants when compared with group I. In group II, serum TSH and BMI depicted a highly significant positive correlation (p value = 0.001) while in group I this correlation was 0.044.

Conclusion: Serum TSH was found elevated in participants with BMI derangement. The stronger correlation between TSH and BMI suggested regarding the inter-relationship between thyroid hormone and BMI and impact of each other’s metabolism.

Clinical significance: The subclinical serum TSH levels and its correlation with BMI require more detailed study to devise a causal relationship. Thyroid hormones have a role in the development and any derangement in the adolescents affects the development.

The effect of thyroid hormones on body mass index (BMI) has been studied by various researchers, and it has been demonstrated that overt thyroid dysfunction affects body weight.1–3 The increasing prevalence of obesity in the population particularly in younger individuals can affect the metabolism and may lead to many conditions like diabetes, cardiovascular risk, etc. Although the effects of hypothyroidism and hyperthyroidism on body weight have been seen in various studies, the cause–effect relationship has not yet been explained. The adolescent period is an important stage of development. Thyroid hormones have a major role during this stage. Thyroid hormones are essential for normal growth, sexual development, and reproductive function. During puberty, changes in thyroid functions and an increase in thyroid volume occur as an adaptation to physical development and reproductive maturation. Any small derangement in thyroid hormone profile during this period will affect the individual’s overall growth, especially BMI.4,5 Therefore, this study was aimed to investigate the change in serum thyroid-stimulating hormone (TSH) and T4 levels with respect to BMI in adolescent girls.

It was a cross-sectional study done at the Department of Biochemistry, All India Institute of Medical Sciences (AIIMS), Raipur. Seventy-five girls of 12–18 years who had visited the hospital OPD accompanying along with the patients were included in this study. The study duration was for a period of 6 months.

Girls with any medical history of disease related to thyroid, cardiovascular risk, hypertension, diabetes, any chronic illness, any endocrinopathy, and family history of thyroid disorder were excluded from the study. The study was approved by the Institutional Ethics Committee. Written informed consent from the parents/guardians/legal representatives of all participants was taken for enrollment into the study.

All participants included in this study were subjected to a questionnaire for detailed history, complete clinical examination, and laboratory investigations.

Results were statistically analyzed by SPSS 20.0 for Windows. All the variables were presented as median with interquartile range (25th percentile to 75th percentile) due to the non-Gaussian distribution of variables. The Kolmogorov–Smirnov method was used to test for normality of data distribution. Mann–Whitney U test was used to compare the results of the studied groups.

The associations between the variables in a group were analyzed using the Spearman test as a correlation coefficient (r) and their significance (p value). Results were considered significant when the p value was <0.05. 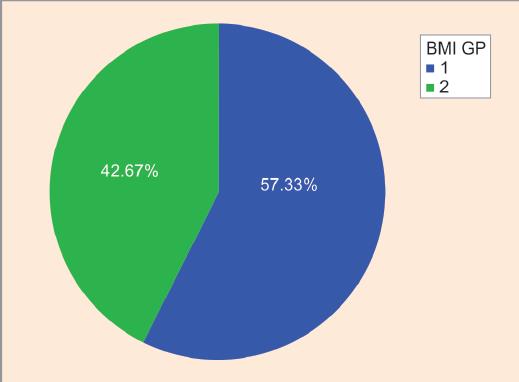 The percentage of individuals with abnormal BMI was 42.67%, which included underweight, overweight and obese girls (Fig. 1). The median values with an interquartile range of all studied parameters, in all studied groups, are shown in Table 1.

The box size for TSH between the two groups is dissimilar but the median value almost the same as reflected in Figure 2A. The lower quartile is smaller than the upper quartile showing the distribution of TSH more toward the subclinical range in group II. The size of the box is the same in both groups with an almost equal median for T4 between the two groups (Fig. 2B).

The percentage of adolescent girls in the study with deranged BMI was 42.67% (Fig. 1), which included underweight, overweight, and obese girls. This finding is similar to the presence of abnormal weight in 49.31% in the study by Fox et al.6 The obesity prevalence in India as per the study conducted by the School of Public Health, London was published to be nearly 16–20%.7 This difference could be due to the difference in BMI criteria taken into consideration for the study.

A significant increase in weight in comparison to height, as depicted in Table 2, implied that changes in BMI could be due to the change in weight as age increases. The skeletal weight, muscle mass, and adipose tissue are a prime contributor to body composition, and changes in these frequently regulate body weight.8 Among these, fat accumulation has an important role because girls in the age group are under influence of hormone interplay that triggers physical alterations like an accumulation of fat deposits around the hip and breasts required for reproductive maturation.9

The statistically significant difference between age, weight, and TSH levels between the two groups indicated that with growing age, thyroid hormones have a regulatory impact on fat metabolism. The strong positive correlation between serum TSH and BMI and insignificant but negative correlation of serum T4 with BMI in group II subjects suggested that any sort of alteration in thyroid hormones may cause an increase in body weight. Our observation was in accordance with other studies.5,10–12 Serum TSH is being used as a primary screening parameter in the clinical setting to diagnose thyroid-related disorders at the subclinical stage. In the present study, serum TSH value was significantly different between the groups, and the distribution of TSH in group II individuals was found to be more in the subclinical range (Fig. 2A). Nearly 16% of girls in group II had serum TSH in the subclinical range. This signifies that most of the teenage girls with altered BMI had compromised thyroid status (Fig. 2). Studies have been published with data that even unit change in TSH level can alter the components of fat metabolism by 3%.13,14

Figs 2A and B: Box plot with distribution of thyroid-stimulating hormone (TSH) and thyroxine (T4) between the groups showing median with interquartile range. Star represents the outliers 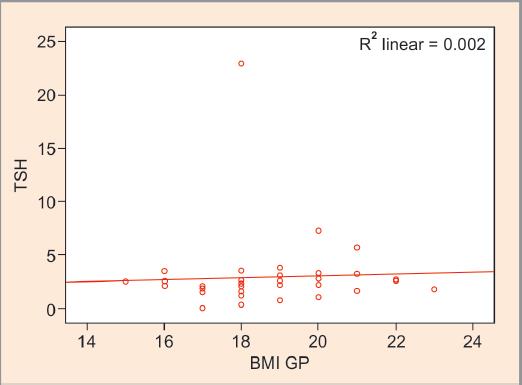 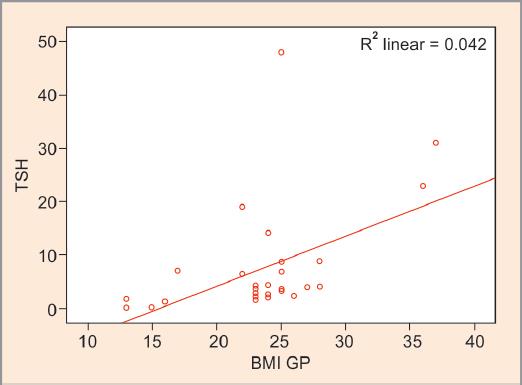 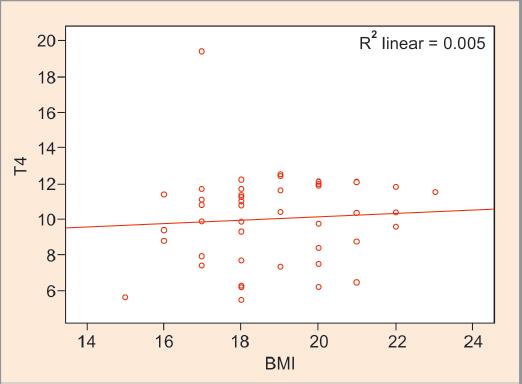 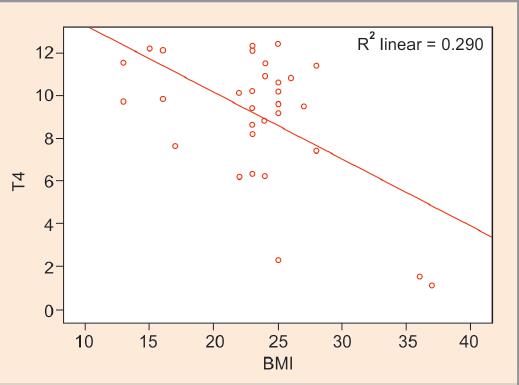 Thyroid hormones have an association with weight and adipose tissue. Hypothyroidism is associated with a decrease in metabolic rate and affects both lipid and carbohydrate metabolism.15 Adipose tissues express receptors for thyroid hormones. Thyroid-stimulating hormone receptors are expressed during lineage-specific differentiation of preadipocyte precursors into mature fat cells. Studies have also explained regarding TSH receptor expression during adipogenesis but decrease with completion of differentiation and with fat accumulation.5 Reduced expression of receptors induces peripheral tissue resistance and interferes with the activity of TSH and thyroid hormones on adipocytes leading to a compensatory increase in TSH and total T4.16 Excessive fat deposition and obesity induce deiodinase activity for the peripheral conversion of T4 to T3 and increase energy expenditure as a defense mechanism to counteract fat accumulation.5,16 Various studies have put forth the theory of elevated leptin in obese individuals, which stimulates TRH secretion and eventually TSH secretion.10,17 Thyroid hormones are involved in both lipogenesis and lipolysis, an effect that possibly is mediated by affecting local noradrenaline levels and/or adrenergic post-receptor signaling.11 Zhang et al. described that the risk of obesity is quite higher in patients with subclinical hypothyroidism in Chinese adolescents.18 Solanki et al. reported that the level of TSH is quite higher in obese patients and it increases as BMI increases as seen in this study.5 Velivala et al. found a higher prevalence of SCH is higher in females and increased with BMI.19

The variations of normal thyroid function with differences in BMI may be due to the changes in resting energy consumption. The positive correlation between TSH and BMI indicates the regulatory role of thyroid hormones on weight maintenance and vice versa. Gradual weight gain in an individual should not be overlooked rather thyroid dysfunction needs to be ruled out.

The limitation of the study includes a small sample size and incomplete thyroid profile. Further large-scale studies are required to establish a causal relationship between obesity and thyroid hormones.