Aims and objectives: The objective of the study is to find out the association of DDAH-2 gene (1151 C/A) polymorphism with coronary artery disease. To estimate the serum nitric oxide levels and find its relationship with the above gene polymorphism.

Materials and methods: Case-control study. One hundred cases of coronary artery disease in the age group between 35 years and 60 years old verified by coronary angiogram having >50% stenosis of at least one of the major coronary arteries were randomly recruited. Cases may be with or without risk factors like smoking, alcohol, and hypertension. Age, sex, and risk factors matched 100 controls who had no clinical evidence of coronary artery disease were selected. Assessment of DDAH-2 (1154 C > A) gene polymorphism was done by TaqMan assay using real-time PCR and confirmation of SNP genotypes was done by Sanger sequencing.

Coronary artery disease is one of the most common causes of death all over the world. Endothelial dysfunction is one of the initial events in atherosclerosis and is associated with risk factors like smoking, obesity, hypertension, hypercholesterolemia, hypertension, type 1 and 2 diabetes, hyperhomocysteinemia, and chronic renal failure.1–3 Many factors have been suggested for the impairment of endothelial function and some of them are reduction of the nitric oxide bioactivity, altered endothelial nitric oxide synthase expression, and increased generation of reactive oxygen species. Nitric oxide is the most potent vasodilator synthesized by the endothelial cells from L-arginine by the action of endothelial nitric oxide synthase. Nitric oxide is a gas with a half-life of few seconds. Nitric oxide maintains the vascular endothelial function in many ways and is an important mediator of vasodilation, antithrombotic processes, as well as growth inhibition and anti-inflammation.

Leiper and Vallance in 1999 showed that dimethylarginine dimethylaminohydrolase (DDAH) has two isoforms namely DDAH-1 and DDAH-2, which are expressed in bacteria, rats, mice, and humans.7,8 Dimethylarginine dimethylaminohydrolase enzyme catalyzes the metabolism of one molecule of ADMA to dimethylamine and L-citrulline (Fig. 1). There are no cofactors needed for the above catalytic reaction. Knipp et al. found that DDAH-1 is a zinc-containing protein.9,10 However, zinc is not required for the catalytic process, but it is needed to stabilize the DDAH enzyme in an active form.10 Leiper et al. showed that DDAH-2 isoform was found to be expressed in endothelial cells where it determined the nitric oxide bioactivity.8,11 Tran et al. mapped the human DDAH-1 gene to the chromosome 1p 22 and DDAH-2 gene to the major histocompatibility complex III region of the chromosome 6p 21.3.8

The gene knockout in rats has shown that DDAH-1 plays a vital role in the regulation of serum levels of ADMA, whereas DDAH-2 plays an important role in the control of nitric oxide-mediated functions of the endothelium.11 The DDAH-2 isoform is expressed mainly in the site of eNOS expression, i.e., mainly the endothelium.12 The gene silencing studies in rats have shown that the DDAH enzyme through the degradation of ADMA, regulates the function of nitric oxide synthase. There are a few studies concerning the association of the DDAH gene polymorphism with risk factors for cardiovascular disease. Gad et al. revealed that a possible association between cardiovascular disease and the A allele/AA genotype for DDAH2 SNP1 (_1151 C/A, rs805304) and G allele/GG genotype for SNP2 (_449 C/G, rs805305) in male 35- to 50-year-old Egyptian patients was observed.13 Maas et al. have shown that 449 G/C and 1151 A/C gene polymorphisms in the promoter region of the DDAH-2 gene are associated with an increased incidence of hypertension.14 Therefore, this study was undertaken to find the association of DDAH-2 gene 1151 C > A polymorphisms with coronary artery disease.

The objective of the study is to find the association of DDAH-2 gene 1151 C > A polymorphism with coronary artery disease. To estimate the serum nitric oxide levels and find its relationship with the above gene polymorphism.

The study protocol was approved by the Institutional Ethics Committee of Madras Medical College, Chennai (No. 21032012). One hundred cases of coronary artery disease in the age group between 35 years and 60 years old verified by coronary angiogram having >50% stenosis of at least one of the major coronary arteries were randomly recruited. Cases may be with or without risk factors like smoking, alcohol, and hypertension. Age, sex, and risk factors matched 100 controls who had no clinical evidence of coronary artery disease were selected. Patients with any other acute or chronic illness were excluded. Assessment of DDAH-2 (1154 C > A) gene polymorphism was done by TaqMan assay using real-time PCR and confirmation of SNP genotypes was done by Sanger sequencing. 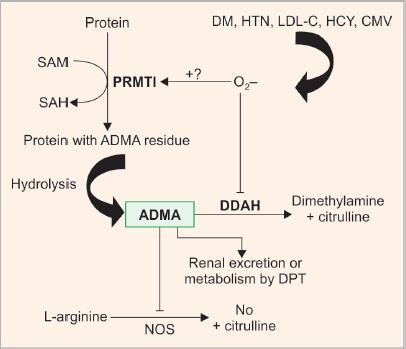 SNP genotyping analysis was performed using TaqMan SNP genotyping assay using ABI Real-time qPCR system. The requirements are 1–20 ng of genomic DNA sample per well, 20× SNP genotyping assay (P/N–4351379, assay ID–C_1519458_20) which contains sequence-specific forward and reverse primers to amplify the polymorphic sequence of interest, and two TaqMan MGB probes. One probe labeled with VIC dye to detect the allele 1 sequence. Another probe was labeled with FAM dye to detect the allele 2 sequence. It also requires TaqMan universal PCR master mix (P/N-4371353) which contains AmpliTaq Gold DNA polymerase UP (ultra-pure), dNTPs without UTP. The PCR was performed with an initial denaturation temperature at 95°C for 10 minutes to activate the AmpliTaq Gold enzyme followed by 40 cycles of denaturation at 92°C for 15 seconds and an annealing/extension temperature at 60°C for 1 minute. The sequence detection system (SDS) software uses the fluorescence measurement made during the plate read to plot fluorescence values based on the signals from each well. The plotted fluorescence signals indicate which alleles are in each sample. 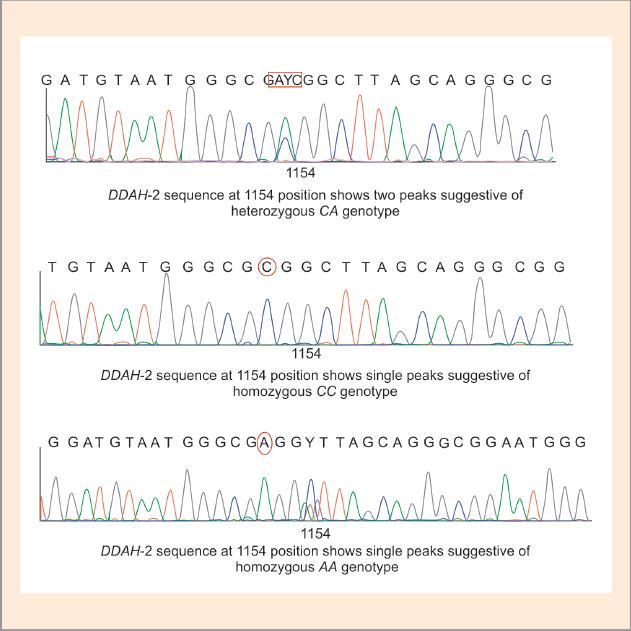 Serum nitric oxide was estimated by modified copper cadmium reduction method for rapid assay of total nitric oxide.15 The transient and volatile nature of NO makes it unsuitable for estimation by convenient methods. However, two stable oxidation products, nitrate (NO3) and nitrite (NO2) are formed. In biological fluids, nitrate can be measured by a colorimetric procedure involving enzymatic conversion to NO2. Reduction of nitrate to nitrite by copper-coated cadmium granules and subsequent estimation of NO2 by diazotization (Griess reaction).

The statistical analysis was performed using SPSS software version 16. p < 0.05 was considered to be statistically significant. Hardy–Weinberg equilibrium, genotype frequency distribution, and allele frequency distribution between cases and controls were compared with a χ2 test. Age, body mass index (BMI), waist/hip ratio, and serum lipid levels were compared between cases and controls by Student’s t-test. One-way ANOVA was used to compare the NO levels between CC, CA, and AA genotypes. Multiple logistic regression analysis was performed to evaluate the interaction between human DDAH 2 CC/AA genotypes and other variables (age, sex smoking, alcohol, serum levels of HDL and LDL) in relation to the prevalence of coronary artery disease.

Table 1 shows the genotype distribution of human DDAH-2 (1151 C/A) gene polymorphism in the study group (both cases and controls). This was found to be in Hardy–Weinberg equilibrium as evidenced by the chi-square test (χ2 = 1.6446, p = 0.19).

Table 2 shows the data of age, sex, BMI, waist/hip ratio, HDL-c and LDL-c levels, and risk factor distribution like smoking, alcohol, and hypertension among cases and control subjects. An insignificant p value was obtained with respect to variables like age, sex, BMI, history of smoking, alcoholism, and hypertension by Student’s t-test. There was a significant difference in HDL-c (low in cases 41.77 ± 3.52, high in controls 47.30 ± 3.90) and LDL-c levels (high in cases 117 ± 14.64, low in controls 101.31 ± 8.77) between cases and controls.

Table 3 shows the genotype distribution of human DDAH-2 (1151 C/A) gene polymorphism in patients with coronary artery disease and control subjects. AA genotype was more frequent among cases (29%) when compared with controls (14%). In contrast, CC was more common among controls (31%) when compared with cases (17%). The distribution of CA genotype between cases and controls was 54 and 55%, respectively. p value is 0.009.

Various genetic and environmental factors are involved in combination for the development of coronary artery disease. An endothelial dysfunction is an initial event in the development of atherosclerosis. Many factors have been suggested for the impairment of endothelial function and it is mainly due to reduction in the nitric oxide bioavailability, altered endothelial nitric oxide synthase expression, and increased generation of oxygen-derived free radicals.

The endogenous inhibitor of the nitric oxide synthase namely ADMA has been identified in the 1990s by Vallance et al.4 Although ADMA is excreted partly by the kidneys, the major fate of ADMA in humans is degradation by the DDAH enzymes.4 The DDAH-2 isoform is expressed mainly in tissues expressing eNOS, i.e., mainly the endothelium.12 Thus, the DDAH enzyme through the catabolism of ADMA, regulates the function of nitric oxide synthase. Some studies have focused on the association of the DDAH2 gene polymorphisms as an inheritable risk for coronary artery disease. Jones et al. have identified six common polymorphisms within the promoter region of the human gene for DDAH-2.16 Maas et al. have shown that 1151 A/C and 449 G/C gene polymorphisms in the DDAH-2 promoter region are associated with an increased incidence of hypertension.14

This study was conducted to determine the association of DDAH-2 (−1151C/A) gene polymorphism with coronary artery disease. The AA genotype of DDAH-2 (1151 C/A) gene polymorphism was significantly higher among cases (29%) when compared with controls (14%). The odds ratio calculation showed that the A+ allele carries a 2.19 times higher risk for coronary artery disease when compared with the A− allele. This is in accordance with Gad et al. possible association between cardiovascular disease and the A allele/AA genotype for DDAH-2 SNP (_1151 C/A, rs805304) in males 35–50-year-old Egyptian patients.13 In the present study, significant differences in genotype and allele distributions were observed between cases and controls. This raises the speculation of the susceptibility of having coronary insufficiency with the increase in the frequency of DDAH-2 A allele/AA genotype for DDAH-2 (1151 C/A) gene polymorphism.

Subjects with AA genotype having A allele at 1151 position in the promoter region of DDAH-2 gene, decrease the expression of DDAH-2 gene and in turn its activity. The decreased DDAH activity reduces the metabolism of ADMA to citrulline and dimethylamine. Thereby ADMA increases which competitively inhibits nitric oxide synthase and the bioavailable nitric oxide is decreased leading to endothelial dysfunction, inflammation, and atherosclerosis. Schnabel et al. reported that plasma ADMA is an independent predictor of future cardiovascular events in patients with coronary artery disease.17 The elevated plasma levels of ADMA in conditions of increased cardiovascular risk have been linked experimentally to changes in DDAH expression or activity.18 Zoccali showed that the ADMA levels are an important independent risk factor for atherosclerotic cardiovascular disease, the prognosis of chronic kidney disease, and the formation of cardiovascular disease in chronic kidney disease patients.19

A decrease in DDAH expression or activity is emerging as a potential mediator of cardiovascular disease.20,21 Thus, DDAH emerges as an important regulator of NO bioavailability. Subjects with CC genotype with C allele at 1151 position in the promoter region of DDAH-2 gene will have a normal expression of DDAH-2 gene and in turn, normal DDAH activity, which metabolizes ADMA to citrulline and dimethylamine, thereby inhibition of nitric oxide synthase by ADMA is avoided and the bioavailability of nitric oxide is not affected.

LIMITATION OF THE STUDY

This study has certain limitations. Serum levels of ADMA were not measured and its correlation with DDAH-2 gene polymorphism and nitric oxide levels was not done.

Informed consent was obtained from all participants included in the study.