Materials and methods: This meta-analysis is to determine serum homocysteine level changes during SCD and was conducted under the PRISMA guidelines. Without language restrictions, the articles were identified through BioMed, Embase, Pub Med® (U.S. National Library of Medicine, USA), and www.Blood Journal.org, PLoS ONE, Web of Science, LILACS (Latin American and Caribbean Health Sciences Literature), ISI Web of Science, Chemical abstract services-(CAS), Europe PMC, Bio sis Previews, Elsevier Properties S.A., USA. The studies have been considered which were published before March 31, 2018.

Homocysteine (tHcy) is a sulfur-containing amino acid, found at low concentration in blood and cells. It is an important intermediate molecule involved in the biosynthesis of methionine and cysteine. The high plasma concentration of tHcy is a well-established risk factor for several disorders, including cardiovascular disease stroke, venous thrombosis, and arteriosclerosis.4

It (tHcy) is an important vascular risk factor, which may contribute to the ischemic phenomenon of SCD has attracted some interest in plasma total homocysteine (tHcy) levels in patients with SCD. However, almost all the studies in SCD have been in children, who presumably have a less predisposition to hyperhomocysteinemia than adults.5

Homocysteine may contribute to the ischemic phenomena present in HbSS has attracted some interest in plasma total tHcy. In a previous study, it was shown that the plasma concentration of tHcy among HbSS subjects was approximately 1.5-fold higher than that of healthy controls. Additionally, SCD patients have higher plasma tHcy concentration despite elevated plasma folate levels and vitamin B12 concentration similar to those observed in controls.6

Elevations of plasma homocysteine levels are a risk factor for endothelial cell damage and thrombosis, which are implicated in SCD-related vaso-occusion.7

Meta-analysis was done by searching of published studies which are reporting the “serum homocysteine level variations in sickle cell disease” was undertaken in accordance with the Preferred Reporting Items for Systematic reviews and Meta-analysis (PRISM) statement for the systematic reviews of interventional studies were followed.8 The three stages comprehensive search of the literature was conducted in the following databases; BioMed Central, Amsterdam. Pub Med® (U.S. National Library of Medicine, USA), www.Blood Journal.org, PLoS ONE.org, ISI Web of Science, Chemical abstract services-(CAS), Europe PMC, Biosis Previews, Elsevier Properties S.A., USA. The studies published before May 31, 2018, are to be considered and included in meta-analysis. 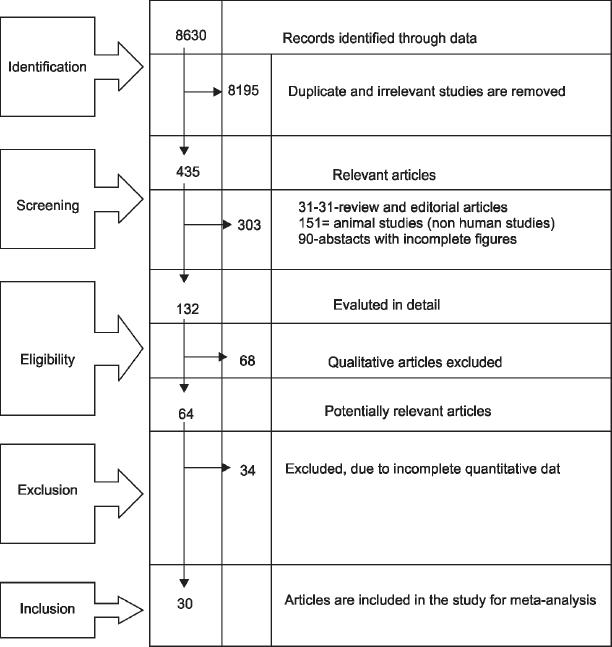 Fig. 1: Selection of studies for meta-analysis of serum homocysteine levels in SCD. This search was conducted by identifying the articles up to May 31, 2018

In the first stage, the necessary databases were searched by using the different concerned search criteria. The Pub Med® database was searched by using the MeSH® (Medical Subject Headings) term “Sickle Cell Disease” and the keywords “Serum homocysteine level”, The Web of Science® databases were searched by using the terms “Sickle Cell Disease” “homocysteine level”. The PLoS ONE® database was searched by simply typing the title name on the Google internet. The blood journals were searched simply by typing the name of the journals, and then the title name of the research topic on the internet. In the above-mentioned journals, published results were very limited to human studies, information/results obtained from books, editorials, commentaries, and conference proceedings were excluded from the studies.

In the second stage, the ideas obtained for reaching the databases using the above research criteria were screened by reading the article “TITLE” and “ABSTRACTS”. Studies that were not related to the topic or not satisfying the inclusion criteria were excluded. The third stage is meant for the manuscript screening, and manually searching the data and references for addition. In this stage, articles not satisfying the inclusion criteria were excluded. We excluded literature reviews, cross-sectional studies, studies on animals, articles with missing data, and excluded the qualitative estimated values of serum homocysteine levels in SCD. These inclusion and exclusion search procedures were conducted independently by the reviewer and the final appropriate group of articles was included in the study.

Data extraction was done independently by two authors, using a standardized data extraction form. To resolve the discrepancies, a statistician was consulted and the information of the variations of serum homocysteine level in SCD, based on title, authors, publication year, and name of the study was extracted.

Thirty studies were included in the statistical analysis which was carried out manually in case of processed variables, partly calculations were carried out by using the latest SPSS-24 software version and Microsoft excel. The Student’s independent samples “t” test was done. The statistical graphs had been represented by using the Microsoft Excel software. “p” value of <0.05 was considered to be statistically significant.

Thirty case-control studies were identified, in which 1,272 cases and 1,557 controls. Thirty studies having the comparison of serum homocysteine levels between cases and healthy controls of various SCDs were randomly selected for the analysis. The selection and screenings procedures of the articles are shown in the given Figure 1 and finally the included articles for the meta-analysis is shown in Table 1.

The independent samples “t” test, pooled standard deviation, standard errors, and degree of freedom were calculated by the latest SPSS-24 software version, and calculations were checked and confirmed manually.

The statistical analysis was carried out by considering arithmetic mean and standard deviation of both cases of SCD and healthy controls of individual studies (shown in Table 1).

The individual linear graph is prepared with means and confidence intervals, and for the standard mean difference, a forest plot is prepared for individual studies and combined estimates.

In this meta-analysis, 22 articles showed mean serum homocysteine level in cases is more than that in controls, and the remaining 8 articles showed the opposite result (i.e., level in controls is more than that in cases). Out of 18 articles with sample sizes of both cases and controls more than or equal to 30 subjects, 12 were statistically significant in and remaining 12 articles in which either case or controls sample size is <30 subjects, only 6 articles were statistically significant. But it cannot be generalized statistically. (p = 0.4582, by Fisher’s exact probability test.)

The 2 × 2 table was constructed as per sample sizes of both cases and controls more than or equal to 30 samples and anyone <30 with statistically significant level was drawn and analyzed by Chi-square test with Yet’s correction and Fisher’s exact probability test. This can be represented as in the flow diagrams and (Fig. 2).

*Due to 30 articles, there is a minor variation, however, total matches with 100 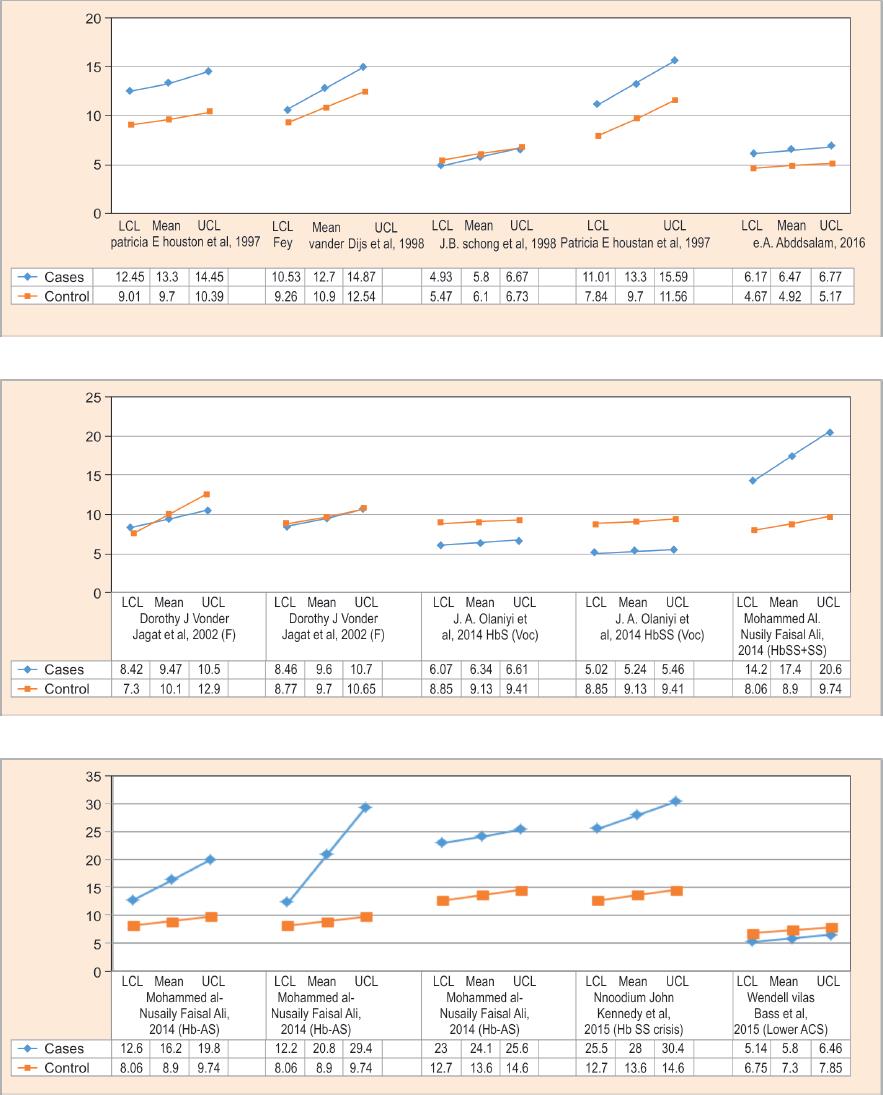 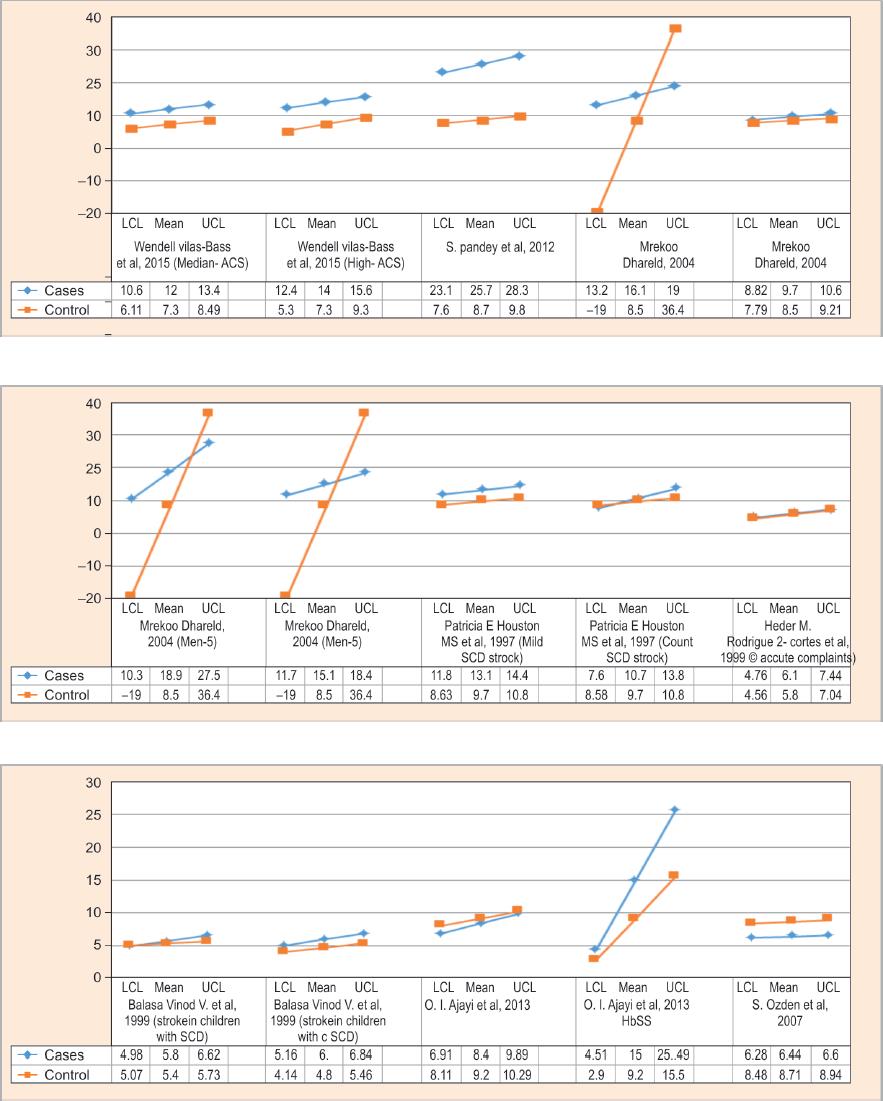 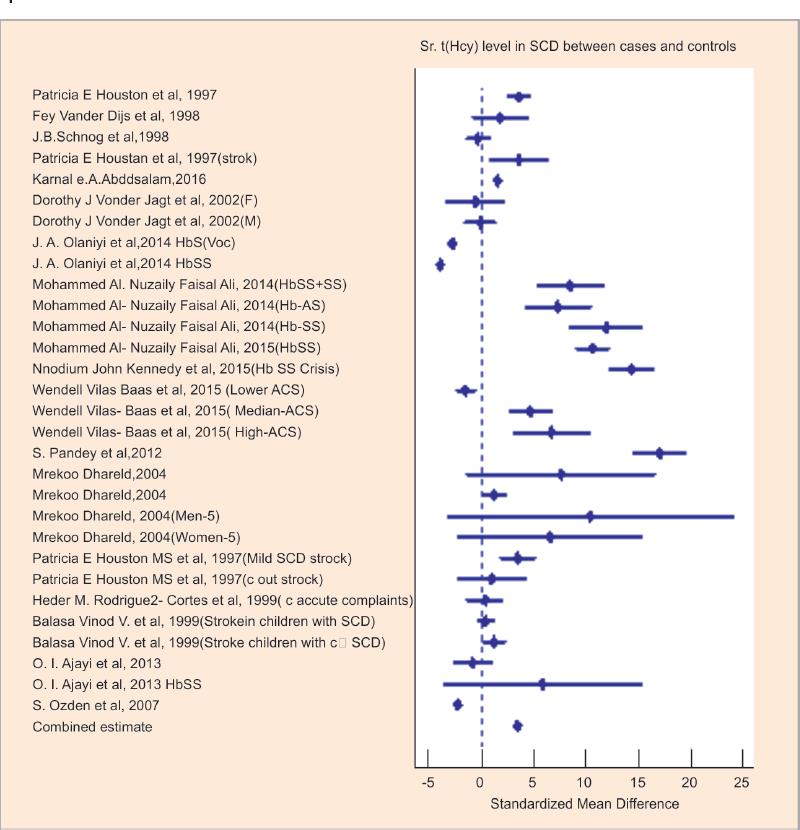 The meta-analysis shows the clinical significance of serum homocysteine in SCD. In this study, 30 articles are incorporated with a total 1,272 number of cases and 1,557 number of controls. The risk factors and pathophysiology of stroke and other serious complications of SCD have not been completely defined. Hyperhomocysteinemia has recently been identified as a risk factor for stroke and other vascular diseases in the general population; however, its role in SCD has not been investigated, so this study is being taken for the meta-analysis.

In this study, Lowenthal et al. and Balasa et al. reported that the serum hyperhomocysteine level was the risk factor for atherosclerosis in SCD patients and Houston et al. reported that the serum homocysteine levels will be high and it may be a risk factor for the development of stroke in SCD patients.6,7,9 In this study, 14 articles/groups are not significant, 3 are significant, and 14 are highly significant.

In non-significant 14 studies, Schnog et al. studied that plasma homocysteine concentrations were measured during acute complications, and observed that, the plasma homocysteine levels in SCA patients and controls were the same.10 But in the study of Vonder Jagt et al., male and female, in two different gender studies stated that the mean homocysteine level of male and female was statistically at the higher side (undistinguishable) with the control.11 Dhar et al. (in both sexes), men-5 and women-13, found that the serum homocysteine status in children with SCD was with mixed results. The findings show that mild hyperhomocysteinemia is significantly more common in adult patients with SCD than in control subjects.12–14 Houston et al. (without stroke),9 Rodriguez-Cortes et al. (with acute complications), and Balasa et al. (stroke in children with SCD) studied and stated that plasma homocysteine levels in the patients with SCA and control subjects were similar and Balasa et al. in 1999 reported that hyperhomocysteinemia is associated with low plasma pyridoxine levels in children with SCD.9,13,14 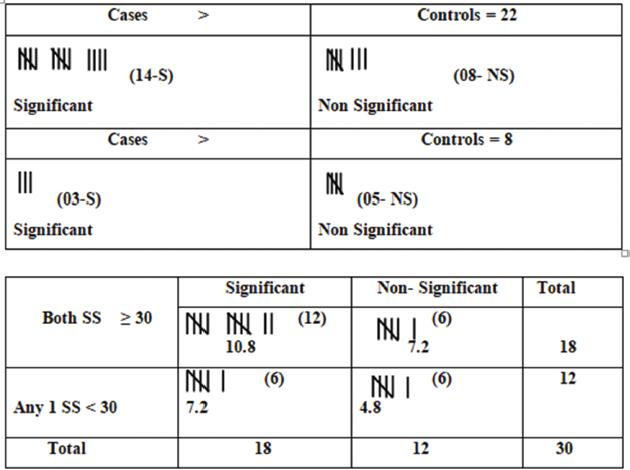 Ajayi et al., Hb-SS., article show that there were no significant differences found between the SCD and controls in MMA or homocysteine but a significantly higher folate concentration was observed in the SCD patients.15 The report of Ali et al. clarified that elevation of tHcy is not commonly found in sickle cell trait; but if found elevated, then that may indicate meningeal vessel thrombosis.16

In the significant studies, the 4th article, Houston et al. (Stroke) studied that the serum homocysteine levels in the stroke group were significantly higher than those in patients without stroke, and the high levels may be a risk factor for the development of stroke in SCD patients.9 In the 15th and 17th articles, Vilas-Boas et al. (lower-ACS), the serum tHcy among SCA subjects was 1.5-fold higher than that of the controls. And, SCD patients have higher plasma concentrations of tHcy despite higher plasma folate levels and vitamin B12 concentrations compared with those observed in healthy individuals.17

In the article Dhar et al. 2004 stated that the plasma total homocysteine (tHcy) was significantly higher in the SCD subjects than the controls.26

Lastly, in the pooled estimation of the overall studies is also showing the serum homocysteine level is statistically very highly significant in the subject of SCD.6,7,9,11,20–26

I would like to thank Biochemistry Departmental Staff for timely help and encouragement. I thank the reviewers for their valuable comments and suggestions.