Introduction: Acute kidney injury (AKI) is a very common complication occurring in medical intensive care, causing significant morbidity and mortality. Several biomarkers have been studied for their utility in diagnosing acute renal failure but without much success. Still, serum creatinine is the marker of choice despite having several shortcomings. In this study, we have tried to see the usefulness of serum cystatin C in comparison to serum creatinine as an early marker of AK.

Materials and methods: A cross-sectional study was conducted involving 50 cases admitted in the ICU of our hospitals and their Cystatin C and creatinine was estimated. The results were compared with cystatin c and creatinine values of healthy controls.

Conclusion: The results clearly showed that estimation of serum cystatin c in ICU patient could go long way in reducing mortality due to acute renal dysfunction.

Acute kidney injury (AKI) is characterized by a rapid decline in glomerular filtration rate (GFR) over hours to days.1 Acute renal failure complicates up to 30% of the intensive care unit (ICU) admissions with a very high mortality rate.1,2 Acute kidney injury is generally asymptomatic and is diagnosed when biochemically there is an elevation of blood urea nitrogen (BUN) and serum creatinine. Retention of nitrogenous waste products, oliguria (urine output %3C;400 mL/day), electrolyte, and acid–base abnormalities are frequent clinical manifestations. Acute kidney injury is often considered reversible. It is further classified as (a) prerenal (55%), (b) renal or intrinsic (40%), and (c) postrenal (5%) depending upon the etiology.1 The first step in evaluating a patient with renal failure is to ascertain whether it is acute or chronic. Acute kidney injury is associated with a rapid increase in serum creatinine and BUN values within 24–48 hours that parallel to the change in the hemodynamic status of the patients. Several criteria have been introduced to assess the severity of AKI. These include the risk, injury, failure, loss, ESRD (RIFLE) criteria, acute kidney injury network (AKIN), and kidney disease improving global outcomes (KADIGO). The populations of patients admitted in the ICU belong to both surgical and non-surgical subset. In the surgical population, a very high proportion is contributed by patients who have undergone cardiac interventions, though a lower incidence of AKI is also seen in elective surgical patients. There is a higher incidence of AKI in sepsis patients. The incidence of contrast-induced AKI is less (11.5–19% of all admissions) than seen in the ICU population at large.3 Early diagnosis of AKI in these ICU patients can substantially reduce mortality and in this endeavor serum cystatin C has come up as a sensitive and novel biomarker. The main objective of this study is to highlight the fact that the uses of novel biomarkers like cystatin C go a long way in identifying patients at risk of developing AKI and subsequently reduce mortality in the ICU (Tables 1 to 3).

The study done was a cross-sectional case-control study on patients admitted in the ICU of Bowring and Lady Curzon Hospital along with Victoria Hospital of Bengaluru Medical College and Research Institute. The sample size was 50 cases and 50 age- and sex-matched controls with the power of the study being 1.000. The institutional ethical clearance board approved the study. After taking informed consent from the patients/attendants, 5 mL of venous blood was drawn by venipuncture. Also, a spot urine sample was taken for the calculation of creatinine clearance. Blood was centrifuged and serum was separated. The separated serum was stored at −20°C till the tests would be performed. Creatinine clearance was calculated using the modification of diet in renal disease (MDRD) and chronic kidney disease epidemiology collaboration (CKD EPI) formulae. The serum samples of the patients were obtained preferably within the first 24 hours of admission to the ICU. None of the patients selected had any history of previous renal disease. Patients between the age group 35 years and 60 years were chosen. Pregnant and lactating females and those patients who had documented evidence of having taken any nephrotoxic drugs in the last week were excluded from the study. The serum samples were run on Beckman Coulter AU 560 autoanalyzer for urea and creatinine. The estimation of cystatin C was done using a 96-well coated ELISA kit obtained from Biovendor. The results were expressed on continuous measurements and were presented as mean ± SD (Min–Max) and results on categorical measurements were presented in number (%). Significance was assessed at a 5% level of significance. The following assumptions on data were made: (1) Dependent variables should be normally distributed; (2) Samples drawn from the population should be random.

The current cross-sectional study in which the serum creatinine and serum cystatin C values were measured and compared between 50 patients admitted in the ICU with the age- and sex-matched normal subjects taken as controls. The result was tabulated and statistically analyzed. In this study, the age of the cases ranged from 30 to 65 years which was similar to the control (46.80 ± 13.13 and 47.06 ± 14.08, p = 0.732). Gender wise among cases 34% of subjects were females and 66% were males, p = 0.832. In comparison among the controls, 32% were females and 68% were males, p = 0.832 which is statistically non-significant. This finding was in accordance with the study conducted by Herget-Rosenthal et al.4 where there was no correlation drawn with the gender of the patients.

The analysis of creatinine among cases showed that only 20% had abnormal values in comparison to 80% who had normal values. Among subjects taken as control, 12% had abnormal values with, p = 0.275. This shows that there was no difference in creatinine measurement in cases and controls. Urea estimation indicated that both the groups, i.e., cases and controls had values in the normal range. (Mean ± SD for cases, 34.38 ± 16.76, controls 33.48 ± 13.23, p = 0.766, not significant) indicating that there was no significant difference in urea values. The literature also says that urea levels can be affected by several non-renal factors and that a high value does not confirm renal failure nor a normal value rule it out.5 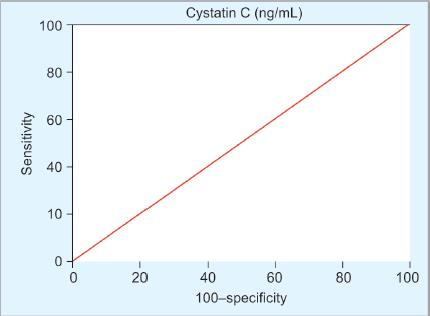 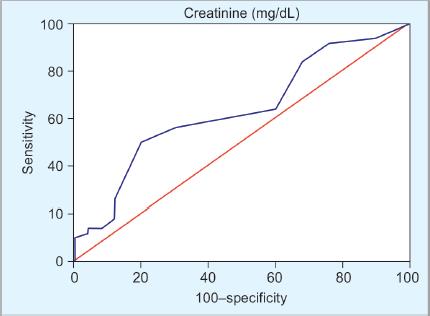 Figs 3A and B: Creatinine clearance calculated by MDRD and CKD-EPI in both cases and controls

Cystatin C evaluation showed that 100% of cases had abnormal values in contrast to controls where only 10% of subjects had abnormal values with p < 0.001. ROC analysis showed that the sensitivity and specificity for serum cystatin C was 100% (p < 0.001) as compared to creatinine which had a sensitivity and specificity of 50 and 70%, respectively, with p = 0.013 (Figs 1 to 3).

Creatinine is the most widely used biomarker for the assessment of kidney function. It is (MW 113 Da) cyclic anhydride of creatine that is the final product of decomposition of phosphocreatine. The amount of creatinine produced each day is constant and is related to muscle mass. Diet also influences the level of creatinine.5 The important thing to note is that even though there is no significant reabsorption of creatinine by the renal tubules, there is a small but significant tubular section. This gets increased in cases where there is renal dysfunction resulting in underestimating the values, thus providing a wrong picture.5 Because of its constant rate of production and maintenance of its plasma concentration within a narrow range by glomerular filtration, it is widely used as a marker for acute and chronic renal dysfunction. But a major drawback is that a normal serum creatinine does not rule out the presence of renal impairment. Cystatin C is a 120-amino acid, 12.8 kDa protein that is a member of the family of competitive inhibitors of lysosomal cysteine proteinases. It is the most abundant extracellular cysteine protease inhibitor. It is synthesized by all nucleated cells. It is a non-glycosylated protein. It is freely filtered through the normal glomerular membrane and almost completely reabsorbed and catabolized by the proximal tubules. With regards to its renal function, its most important attributes are small size and high isoelectric point (PI = 9.2) which enables it to be freely filtered. The cystatin C concentration is independent of muscular mass, inflammatory diseases, sex, age, or diet.6–12 It is also sensitive to the changes in the creatinine blind range of GFR (40–70 mL/minute/1.73 m2). Since there is no tubular secretion of cystatin C, it is a very sensitive indicator of minor changes in the GFR in the earliest stages of kidney disorders.13–17

In our study, it was found that there was a significant elevation in serum cystatin C levels in cases compared to controls. Serum creatinine was found to be normal in both cases and controls. This study suggests that despite the serum creatinine is normal, the serum cystatin C was elevated with 100% sensitivity and specificity in cases. Also, all the cases had normal creatinine clearance, signifying the fact that cystatin C can be used as a marker for early diagnosis of acute renal failure and identifying patients at risk in the ICU. Our study has results that are comparable to other studies done worldwide.